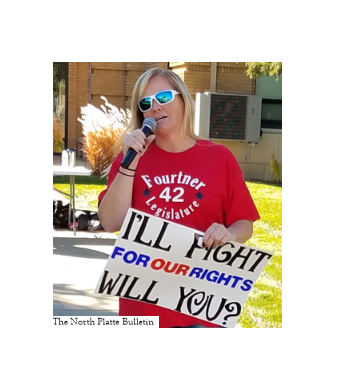 I am a North Platte native raised between North Platte & Broken Bow. I am a mother of 2 & a Nana of 1. I am a self-employed independent provider for adults with developmental & intellectual disabilities. I consider myself to be a “Jane of all trades & a master of some.” I am a licensed cosmetologist, I have been a welder, & I have my Associates of Science in Business Management. I have raised my two children on my own, so I know the struggles of having to work two jobs to pay the bills & put food on the table. I am a generation X survivor & Patriot.

I am a registered Republican & republican voter. I am not a politician but rather a concerned citizen. I started my journey watching politics & yelling at the TV or computer screen. Like you all, I have watched our elected officials forget their place as “servants of the people”. I never planned on running for any elected office. I just wanted to be left alone to raise my children & live my best life. I have heard the voices of America & Nebraska screaming for the corruption to come to an end. It is my goal to help do just that!

I want it understood that I am a person of action. I don't believe in sitting around talking about things until the fire burns out. I believe the best time to strike is while it’s "Hot". You may have heard about the protest at the Lincoln County Courthouse against the "vaccine" mandate. My family member & friends were told they had to inject a foreign substance into their bodies no matter their religious beliefs or medical health. While other candidates for this district put up no resistance to the push for vaccines—and in some ways took part in promoting the jab, I was working to organize a protest in defense of medical freedom on behalf of the railroaders and healthcare workers.

I knew the vaccine mandate was wrong, and was clearly a violation of civil liberties & religious freedoms, no matter what any American court would say. My sister had seen that I was protesting at the local school board office twice against the masking of our children. She knew that I had gone to speak out against Critical Race Theory, & Critical Sex Education at our state schoolboard meetings. She had seen videos of the State Capital protest I had attended against the medical mandate applied to our military & others. She shared with me her concerns about the vaccine mandate when things began to hit home and affect her personally. I believe in her heart she then understood exactly why I had been speaking out against the tyranny of elected officials. Sometimes it takes tyranny knocking on a person's front door to see that action must be taken. For other's we just feel it in our souls that action must be taken before it hits our front doors. The point is "Wrong is wrong, even if everyone is doing it. Right is right, even if no one is doing it!”

I am a co-sponsor of the "Helmet law repeal" initiative, because I believe in freedom of choice as long as a person is chancing only their own life. Hundreds of thousands of dollars yearly are diverted from Nebraska owned businesses as bikers travel around our state because our elected officials took that choice away. I am also a co-sponsor of the "Constitutional carry" initiative which gives citizens the option to conceal or open carry in any public area. I believe our police officers are the second line of defense in a deadly situation. Most of the time by their arrival they show up to draw the body chalk lines. The quickest defense is those that are armed and already on scene. You're safer in a room filled with armed citizens than in a room full of defenseless citizens. I support all of the "Restore the Good Life" initiatives. Grassroots candidates for Nebraska have voiced our concerns to Grassroots candidate Michael Connely. He, like all of the grassroots candidates that belong to "Voices of Nebraska," believe in taking action now & not waiting until after we are elected to get started on the work of “Restoring the Good Life.”

Nebraskans know that the Nebraska swamp needs to be drained. Grassroots candidates mean that we are not bought & paid for by ANY lobbyist group, or special interest groups, we want your voices, not your money. While donations are very much appreciated when others hear from their own friends who they believe are the best candidates & why, that often helps them hear facts they might not have already heard about the candidates.  We answer to ONLY the People, by the people, for the people. We believe in speaking the truth even when the truth hurts, because the truth is the only way answers can be found. Lies & deception just help the corruption. We are not polished politicians; we are Patriots fighting to do the Right thing.

Thank you for taking the time to read this far,