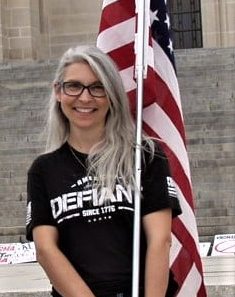 It brings me no pleasure to announce that I am running for Nebraska Attorney General. The truth is that I would love to sit comfortably on the sidelines and let others fight the battles; but it seems that the state of our government is eating away every day at our levels of comfort, and far too few are stepping up to fight in the ways that I believe are required of us right now.

Quite frankly, I hope that by getting in the race, it will encourage others who believe themselves to be more qualified than I am to also enter the race. I welcome and encourage others to enter, not only this race, but others as well. Given what I believe are failures of so many who are currently serving in government, I do not believe that we should allow any incumbent to run unopposed. There is room on the playing field for as many patriots as are willing to step up. And the more who do, the louder we can amplify our voices. No one should believe that they don't belong. So if you can’t join me and support me as your candidate of choice, then beat me by proving yourself to be a better public servant than I would be. That is my request. But don’t expect me not to put up a fight.

My fight is not to seek a position in government. My fight is to try to ensure that whoever it is that we elect this next time around is someone who will be a true public servant and who will put the needs of the people first. Unfortunately, that has not been happening. Far too often, our government has not been listening to the voices of the people who have been crying out to them to take action and to uphold the oath that they swore. Am I qualified to be your Attorney General? I will leave that for the people of Nebraska to decide. But just know that I do believe we can—and MUST—demand better leadership than what has been shown by our elected Republicans over the past year.

I believe that much more should have been done by our elected Republicans to push back against overreaches which have affected people’s rights to bodily autonomy. And I believe that if our elected public servants had—from the very beginning—been committed to upholding the oath that they swore, we would be better positioned right now. Things did not have to progress to the point which they have. They certainly should not have been permitted to do so without more of a fight from those who were elected to be our representatives in government.

The following is the oath that our elected public servants swear when taking office.

For the last year or more, I believe that this oath was often not upheld. Elected public servants are not supportive of the U.S. Constitution when they permit people’s rights to be infringed upon. Nor do they uphold their oath when they engage in actions which are in direct conflict with the agreed upon principles (consent) of a government that is of, by, and for the people.

We saw this repeatedly take place with regard to mask mandates, and the failure to address that overreach of government contributed to our state declining into further overreach with vaccine mandates. Recent actions to oppose such overreach came far too late in the game than they should have. And while I am grateful that our current AG Peterson has addressed the issue of ivermectin and hydroxychloroquine, I feel that this action should have come MUCH sooner than it did. Lives could have been saved, I believe.

If you read through some of the commentary I have shared on this web site, you will learn that I firmly believe that our voice is our most powerful weapon in the fight against tyranny. For proof of the power that our voices hold, look no further than to the lengths that have been gone to in order to keep us silent. Our media and our government have suppressed our voices by closing their ears to us and also by failing to offer us any public representation. I believe that it is a sign of weakness when any person who has asked to be a servant of the people says, “There’s nothing I can do.” That should NEVER be an acceptable answer for any leader to give. Those whom we choose to represent us in office are there to be just that—representatives. They are supposed to amplify our voices so that we have representation in government. So even when they might think that they have no power to act in other ways, they ALWAYS have a voice and, as elected public servants, a platform from which to amplify our voices and represent us in that way. I believe that we need to insert the voices of the people back into government.

And that is why I am running for Attorney General. As someone who has repeatedly had my own voice fall on deaf ears in government, I have set myself to the task of trying to restore voters to their rightful role in the relationship between candidates/politicians and voters. Our elected public servants work for us, and yet, far too often, “we the people” are treated by our government as if they have forgotten that. In order for our elected public servants to be faithful representatives of the people, they MUST be accessible to the people and willing to hear our concerns. They must never think that THEY know better than we do what is best for us.

Oh, and for anyone who may be wondering if I am an attorney--I am not. I am a law school dropout. I would have loved to have studied constitutional law, but, unfortunately, I discovered in my first semester that law school is every bit as much the socialist indoctrination camp that colleges and universities are! It is of no surprise to me that we have so few attorneys stepping up to defend conservative causes. I have often told others lately that I fear that "we the people" are going to have to become our own legal representatives. And so, to that end, and because so many people have asked me to run for office, I am offering up myself as an option for the voters to consider to hold the position in our state of Attorney General.

I will be putting in the time to study and learn the role of the job, but make no mistake--I am not running for the position because I am claiming to have all the answers. I don't. I am running because, as a voter who has watched so much inaction on the part of our government this past year, including what I believe are the failures of many to uphold the oath of office, I have questions. And I plan to use my platform as a candidate to try to get answers for the people of Nebraska as to why, over the past year, justice has been (and continues to be) delayed or denied.

I can promise that I will never tell the people of Nebraska that there is nothing that can be done if I am called upon to help, because no matter how many roadblocks to a solution may exist, elected officials always inhabit a place on the public stage from which they have a duty to amplify the voices of the people whom they represent and serve. And voices have power.

Visit my Rumble page or peruse and search the Voices of Nebraska page to learn more about me.