In the true story of Trump and the vaccines, you cannot separate the "hero" from the tragedy 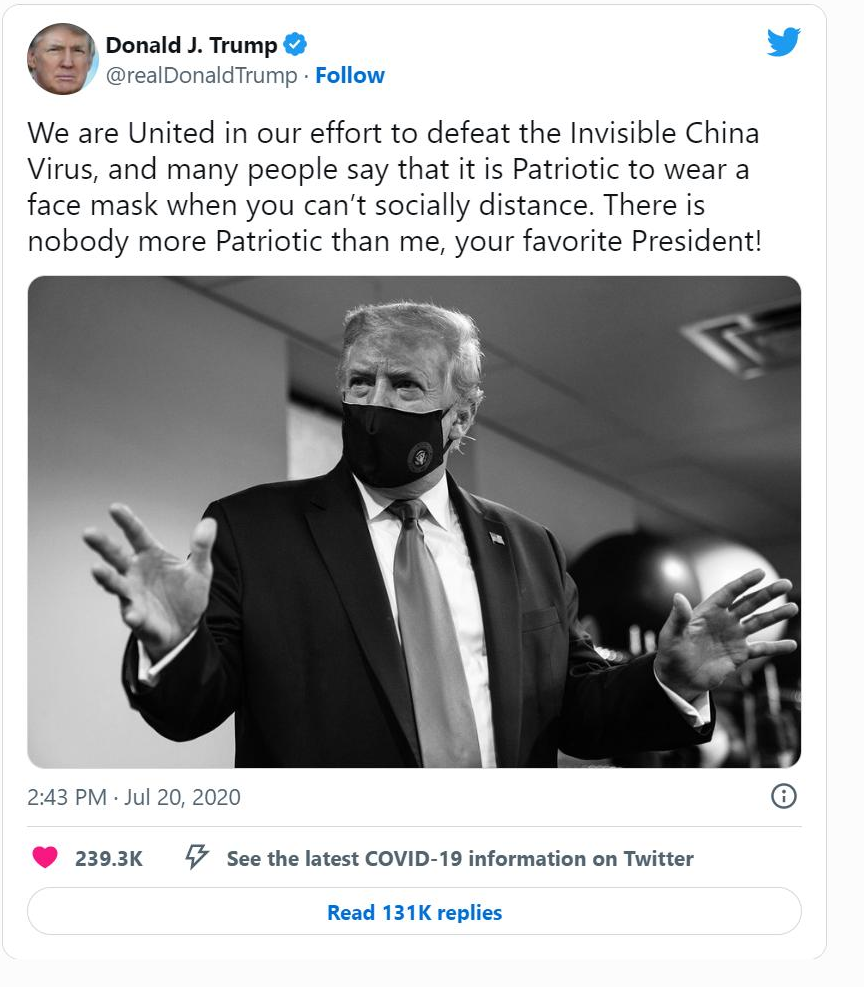 The plandemic shutdown was training us to become ever more dependent upon all of that "free" money from the government. Even before the plandemic, Trump was a big spender with government money. Trump was at the helm of the shutdown for a virus with a very low fatality rate. Something happened that changed him. I don't know what it was, but if you remember, things started to look like they were turning around about May 2020 after we had (ahem) "flattened the curve." I think it was also May 2020 that Trump announced Operation Warp Speed, though Trump had said even back in February 2020 that they were "very close to a vaccine."

But around maybe the end of May 2020, people started going out again and being less afraid. And then BAM! Mask mandates, social distancing, and plexiglass barriers arrived on the scene. Those actually came AFTER the "flattening of the curve." And Trump, who had previously been ridiculed by the media for not wearing a mask CAVED like a pussy and wore one publicly around June/July 2020. And THEN, probably to cover for the embarrassment of the well-earned shaming Trump received for finally caving to the mask, the Trump administration started putting out the messaging that wearing a mask was the "patriotic" thing to do. No--it was the idiotic thing to do!

So now, here we are with people dying "suddenly" and suffering other health problems from a vaccine that there was no just cause for rushing into production, and Trump still to this day speaks absolute lies when he talks about the plandemic. Trump could have shut that BIG LIE down with the TRUTH. But he didn't. His handling of the plandemic not only undid every good thing Trump ever gave us, but Trump's perpetuation of the narrative that the plandemic was going to kill so many people if he hadn't stepped up and saved the day has set the stage for Biden to continue on with ever more spending on COVID-19 bullshit.

Trump could have turned things around so quickly if he had just been truthful with the American people. The truth was out there from doctors such as Simone Gold and others (whom our government has persecuted for telling the truth), and Trump ignored them. And idiot Trump supporters (I say that as someone who used to be a die-hard Trumper) are giving him a pass now by saying that he had "no choice!" Ummm...yeah, he did. A good leader would have done a better job. And a "5-D chess player" damn sure would have. So what the hell happened to Trump? It was either ego or money. And neither one is a selling point for why we should ever vote for him again. Biden is horrible and he deserves all the criticism that he gets, but damn, Trump sure set him up to be able to mandate a vaccine that Trump insists would not exist if not for him, and to pick up (at “warp speed”) massive spending for the sake of a plandemic that was never anything more than a hoax built around a virus with a VERY low fatality rate.

The comments above are from a reply I made to someone on Facebook, so my commentary is from memory and not a researched post with sources, as many of my others are. But go ahead and fact check me on any and all of it. I invite you to prove where my memory has failed me, and if I am mistaken on any of it, then I promise to do that which Trump seems unable. I will admit that I made a mistake. So get busy fact-checking, if you think I've gotten it wrong. And if you think it was uncalled for or mean for me to call those who are still supporting Trump "idiots," then I invite you (again) to fact check this and then make your case, if you still can, as to why it would not be foolish and stupid (i.e., idiotic) to continue to trust Trump's judgment. People want to have it both ways. They want to be able to speak the truth about how bad the vaccines really are, but they also want to turn a blind eye to the FACT that Trump claims that, were it not for him, that "beautiful shot" (his words) would not even exist.

We are living in The Hunger Games. People don't even seem to be able to discern the line between the entertainment of political soap operas and the reality of watching people die from the shots. Trump--even if his intentions were always good--has blood on his hands and there's no two ways about it. In the case of Trump and the vaccines, you cannot separate the "hero" from the tragedy. And yet people still cheer him on, making excuses for the fact that he has never spoken honestly to us about the fatality rate of the China virus in 2020. If he has and I've missed it, please share. What I have seen instead is that he regurgitates mainstream media fake news about how deadly the virus was (never failing to include how many lives HE has saved), when the truth is that the fatality rate was less than half of one percent for most people. More people died in 2020 from heart disease and cancer. My trust in Trump plummeted when he put on a mask and called masking "patriotic." That act of submission to social control signaled to me that our country was in more trouble than I had previously thought.  I hate acknowledging that Trump is not the strong leader that I thought he was, because I don't want it to be true and I kept thinking that eventually Trump would say something that would explain why he did things the way that he did. But people are dying from the jab, and Trump STILL has not been honest about his part in all of it. How do we trust someone like that going forward?

Other commentary that does include referenced sources can be found in posts below. Get mad as hell at me if you like for saying these things. Hate me even, if that is the emotion that is stirred in you. But PLEASE don't run from the debate. I'll never run from defending my beliefs and my positions on things. No one should, But I'll never be unwilling to have my mind changed either. Those who are true seekers of the truth will never run from the friction of ideas, for it is that friction that keeps us from remaining dull.