REPUBLICANS should have been a firewall between us and tyrants. (They are useful idiots instead.)

I posted some audio from a Voter ID town hall held by Governor Ricketts a while back. (You can find that posted at the bottom of this article.) The responses to my concerns (which are shared by many Nebraskans) from Ricketts and Senators Clements and Linehan were less than impressive. People need to take note that even our BEST Republicans are failing us. (Many would cite Clements as one of our best.)

I promised to follow up and share the responses I received. Senator Linehan still has yet to respond, even after being sent a reminder. Below are some of the email exchanges I've had with our do-nothing Republicans. And for anyone who is wondering, where the emails say "quoted text hidden," what isn't shown is just the message which is being replied to in that particular email. It's all there, but the "hidden" text is just duplicates of emails that are already shown. If the pictures of the letters is too small to read, you can download a zip file of the letters using the link at the bottom of this page.

When I ran for office, I did so alongside other candidates running for constitutional offices in our state who promised, as I did, to be a "firewall" between the people and socialism/communism, tyranny, and all forms of government overreach. Why aren't our currently serving Republicans in government acting as a "firewall" to protect our constitutional rights? Hmmmm? Instead of defending OUR rights, they defend their peers in government. If they put as much effort into protecting our rights as they did into generating excuses for why they are not, we'd be a hell of a lot better off than we are right now. Why are our concerns about threats to our rights not their concerns as well? 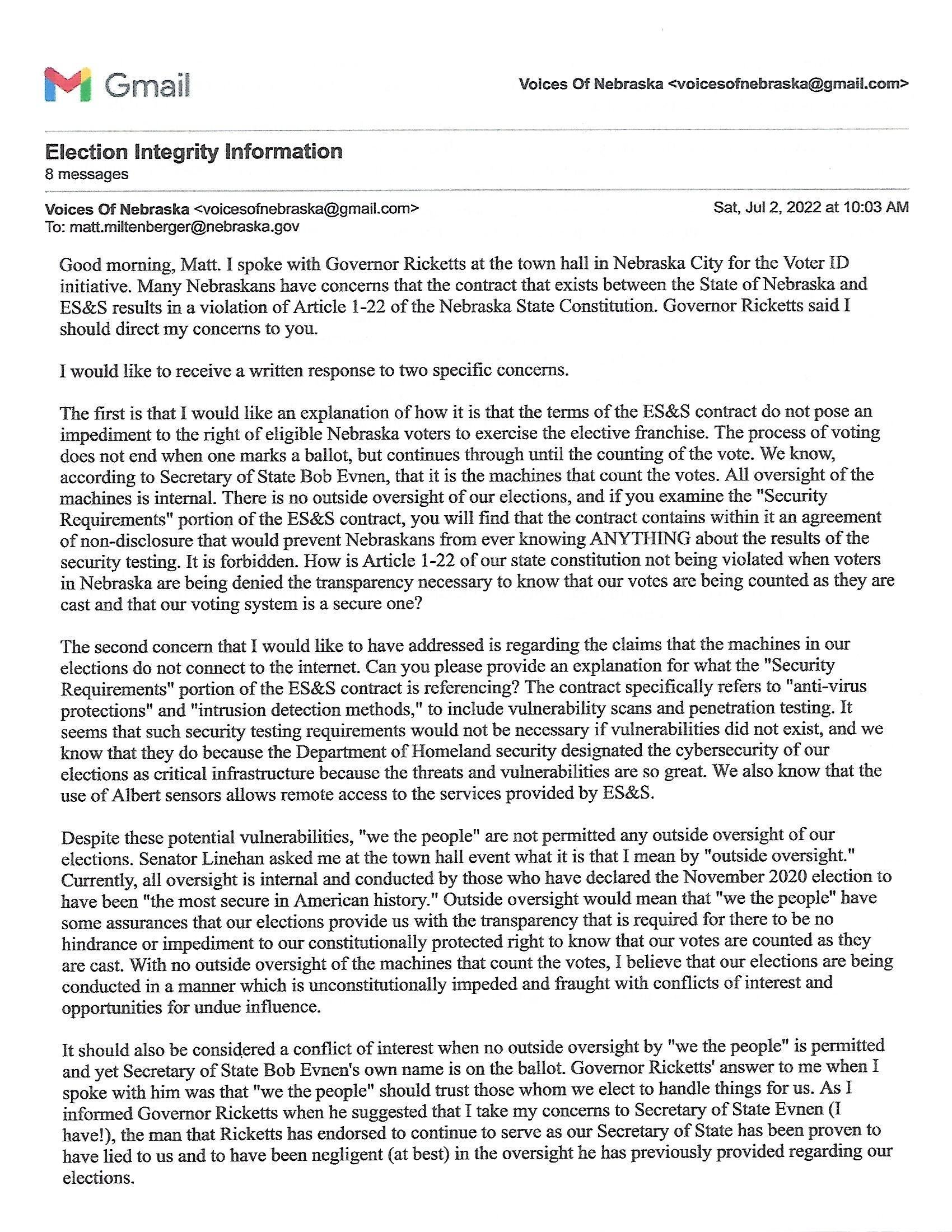 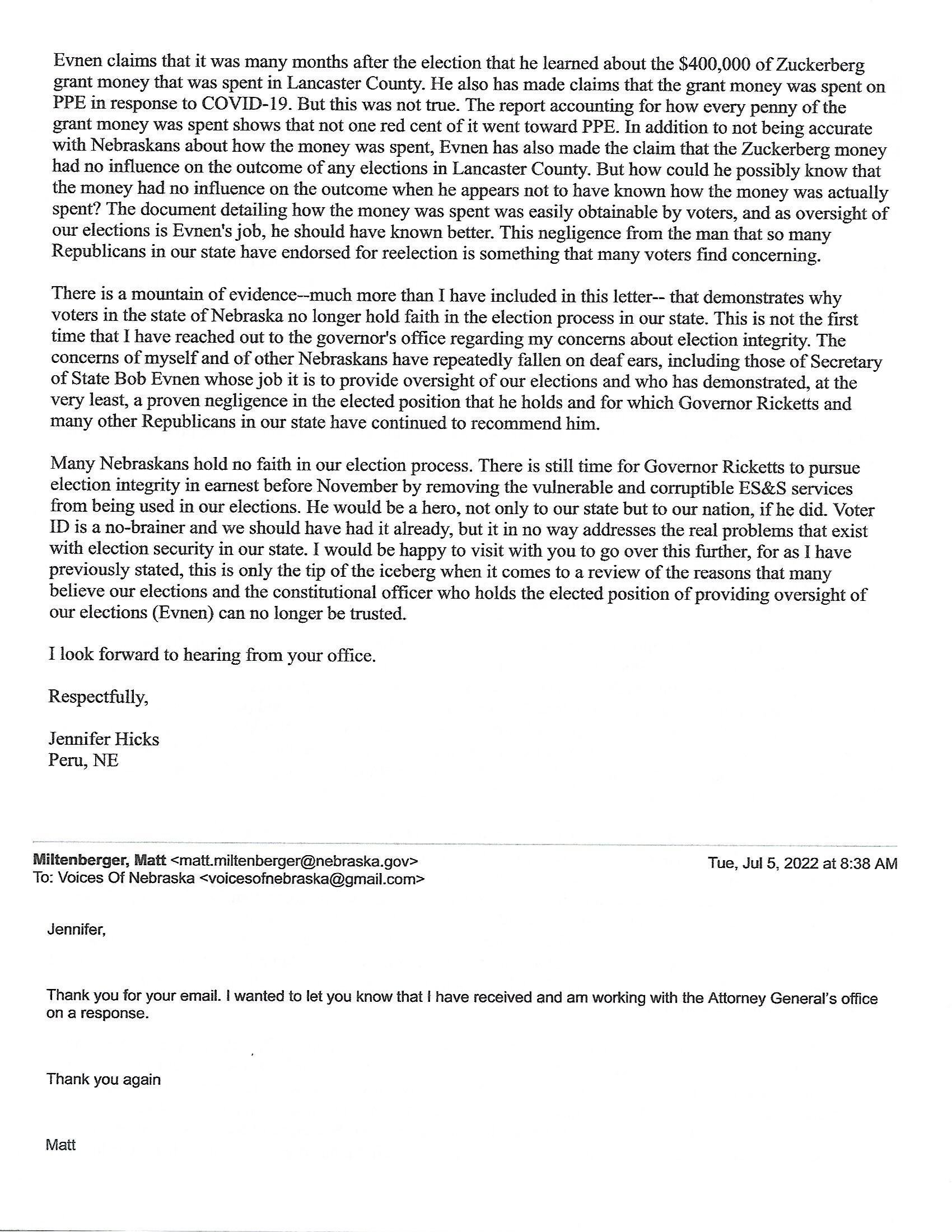 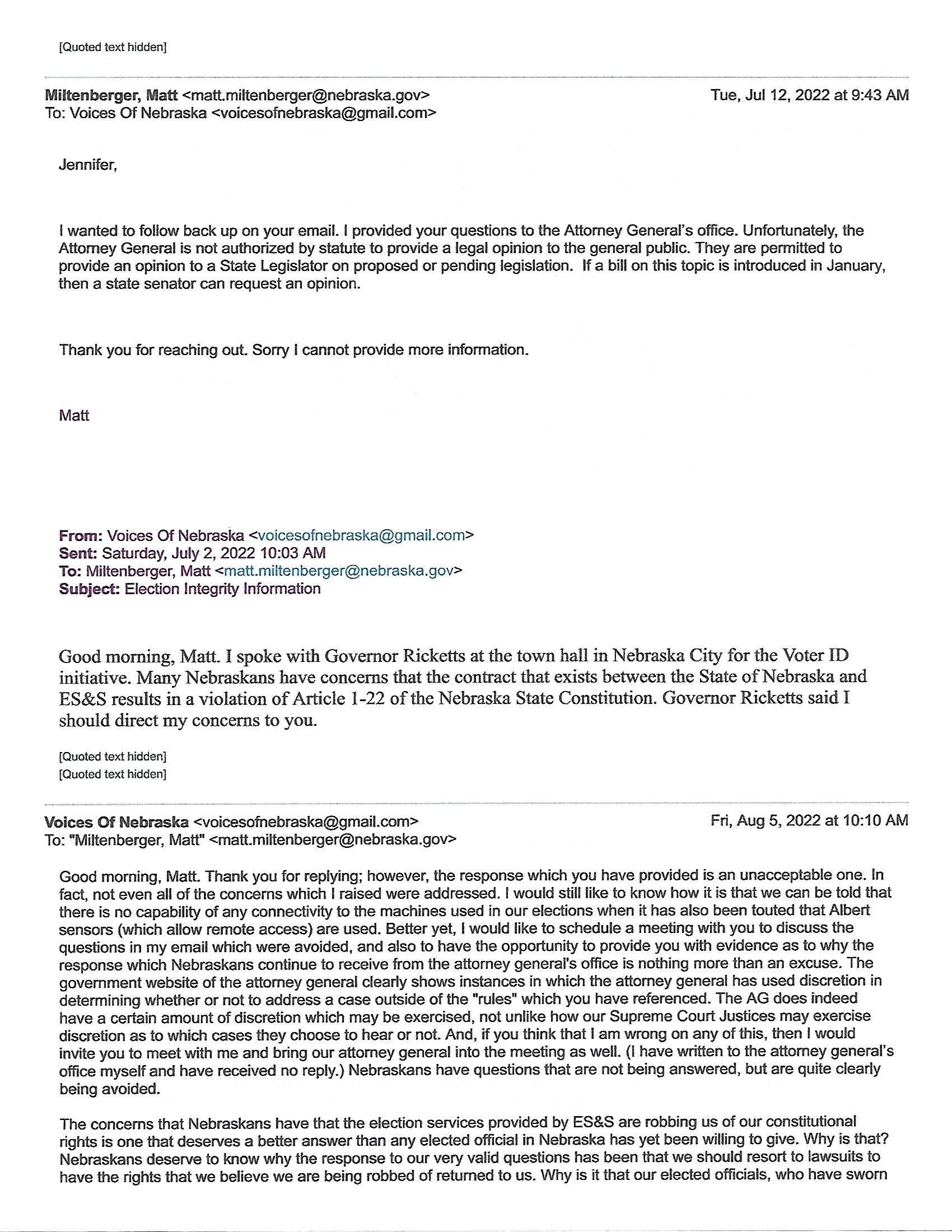 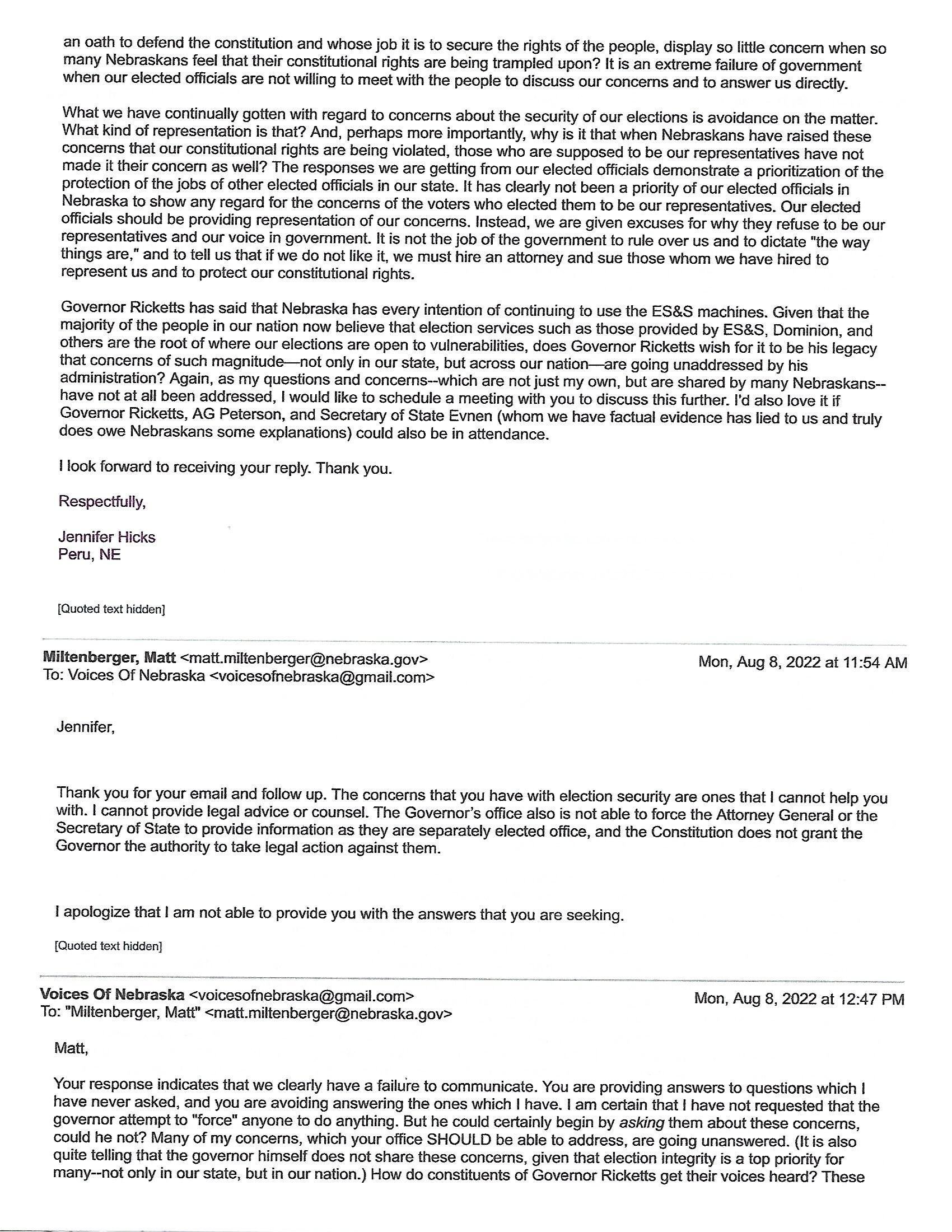 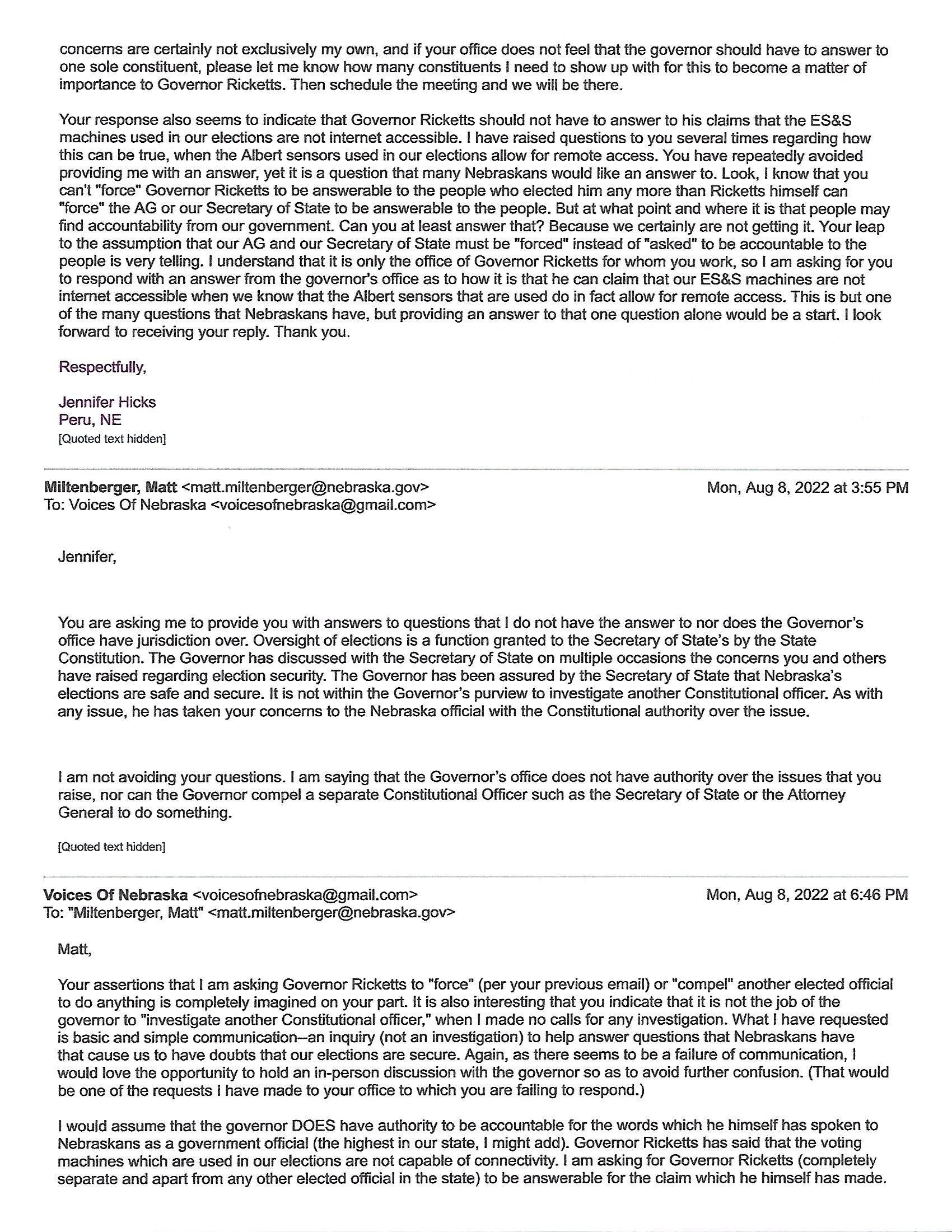 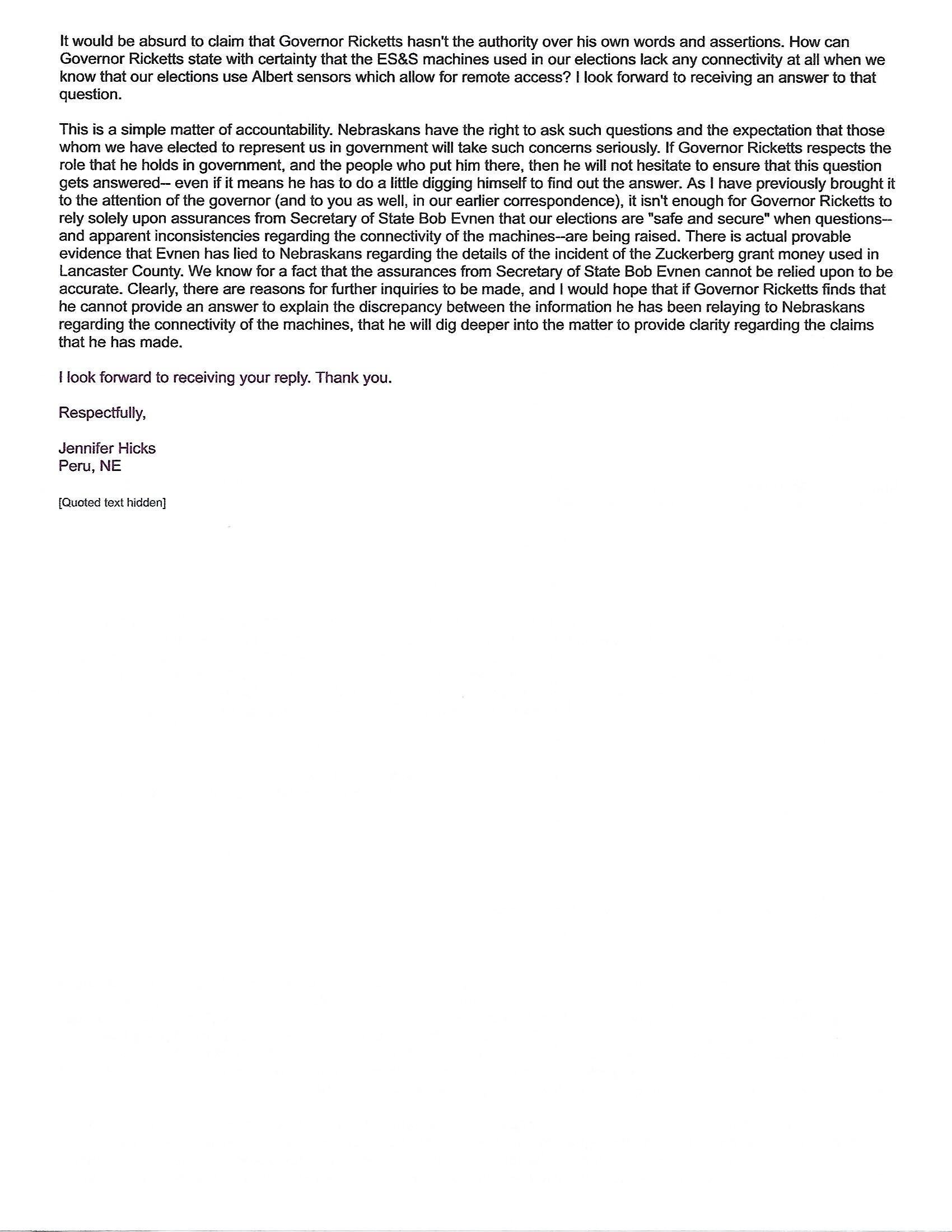 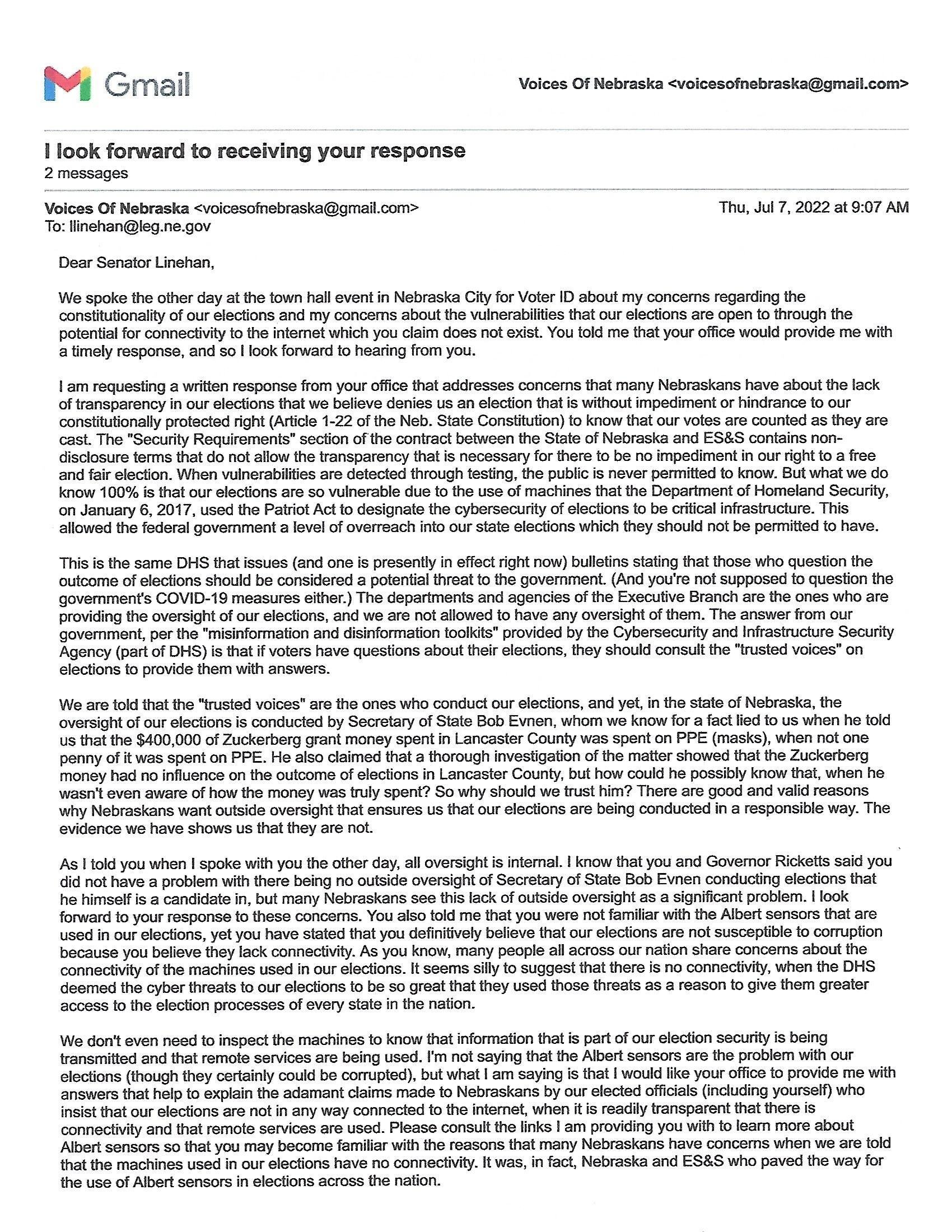 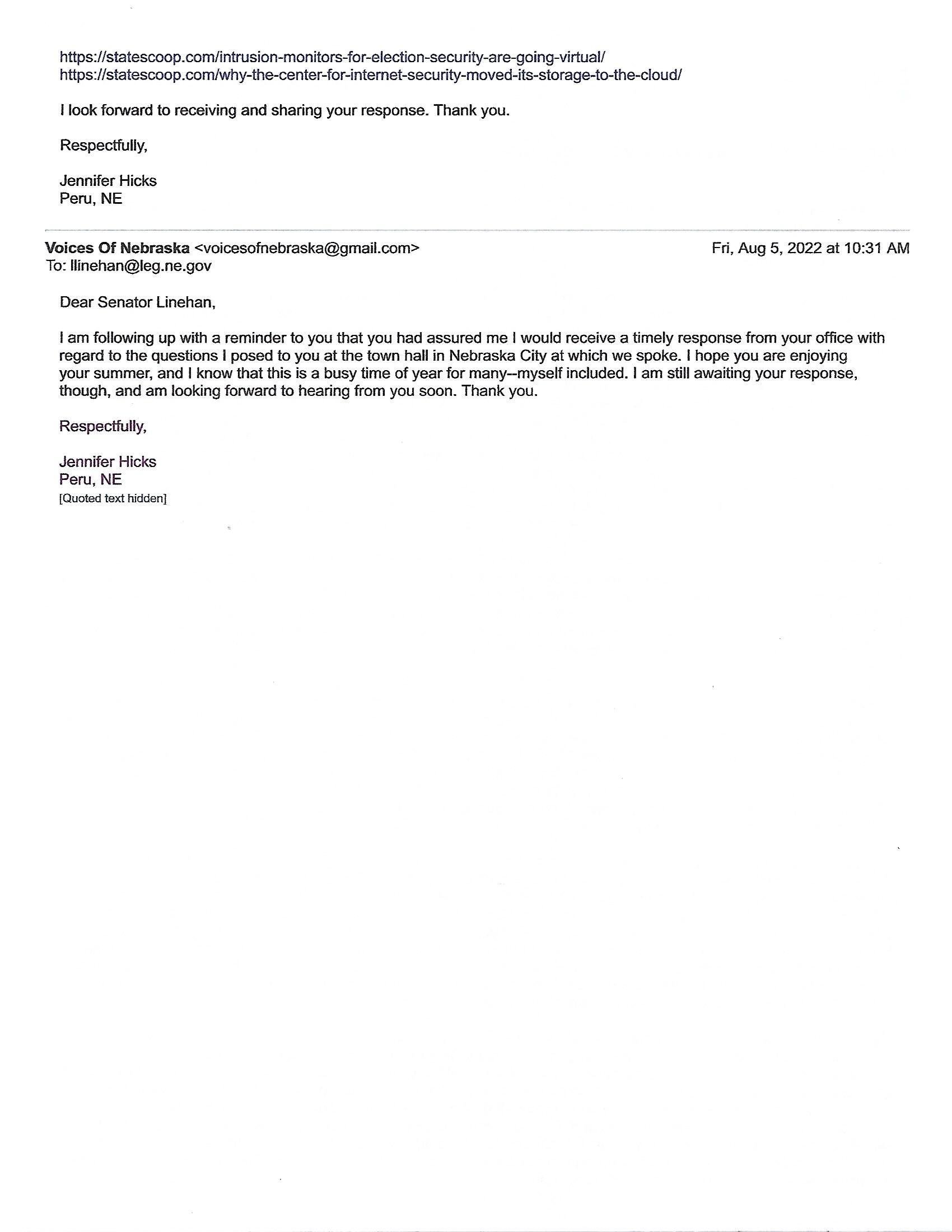 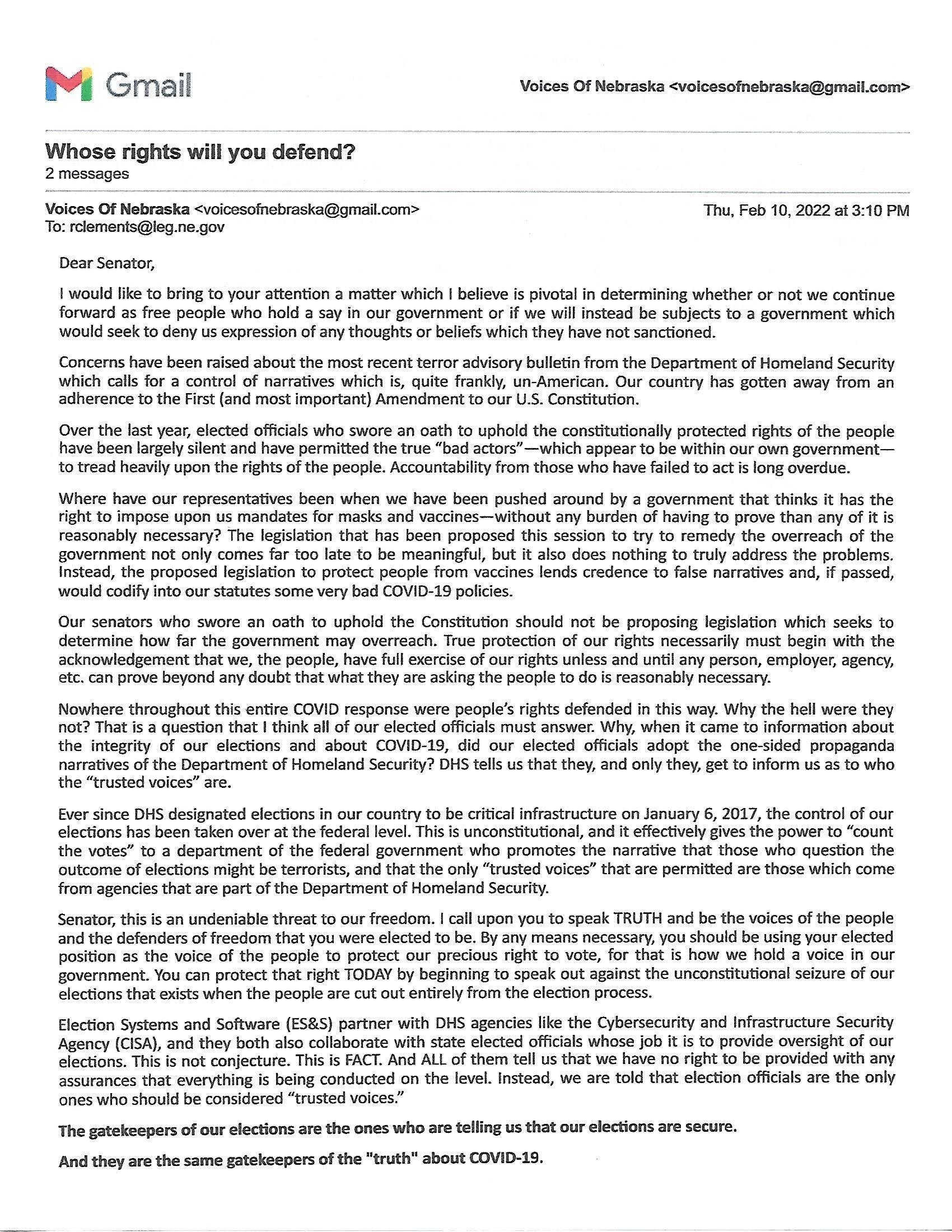 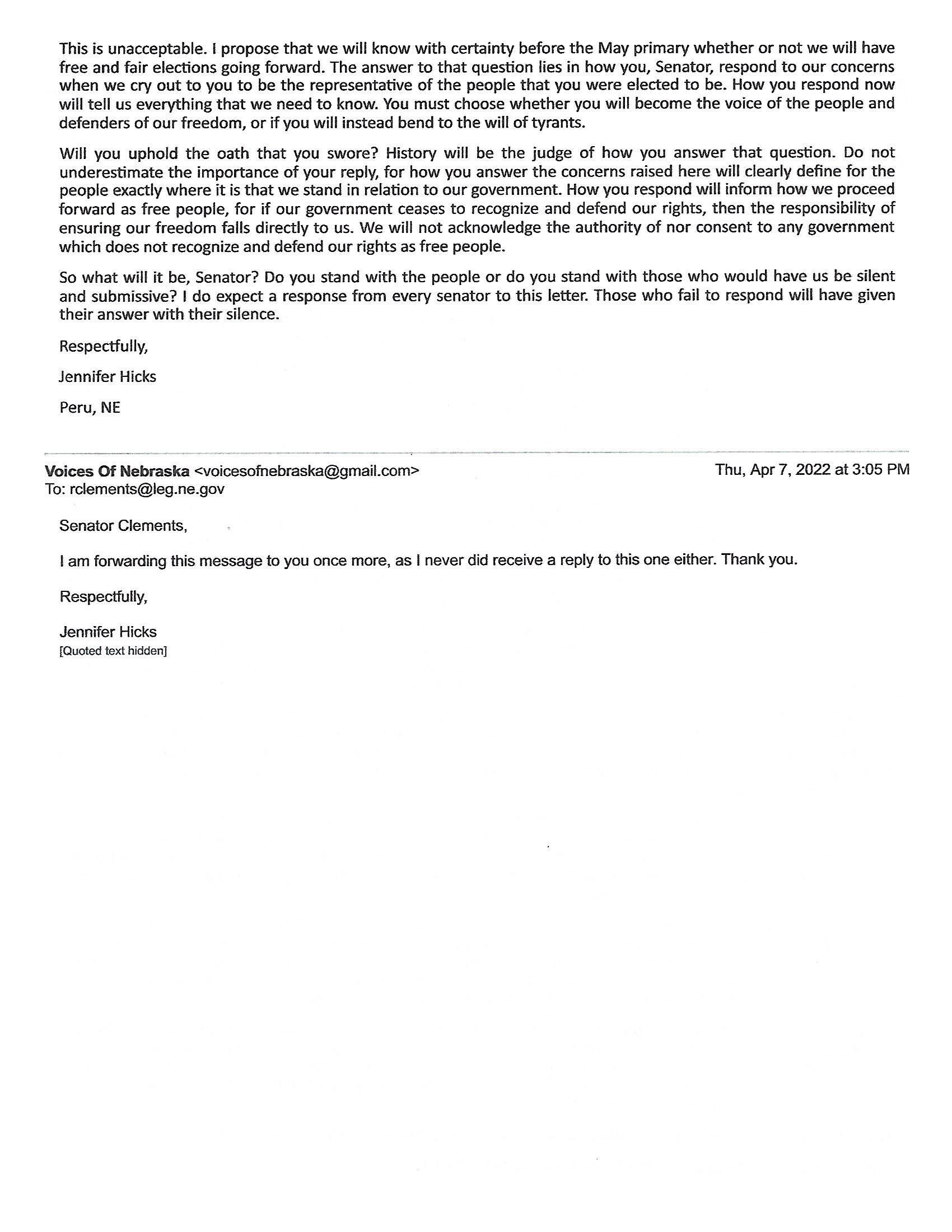 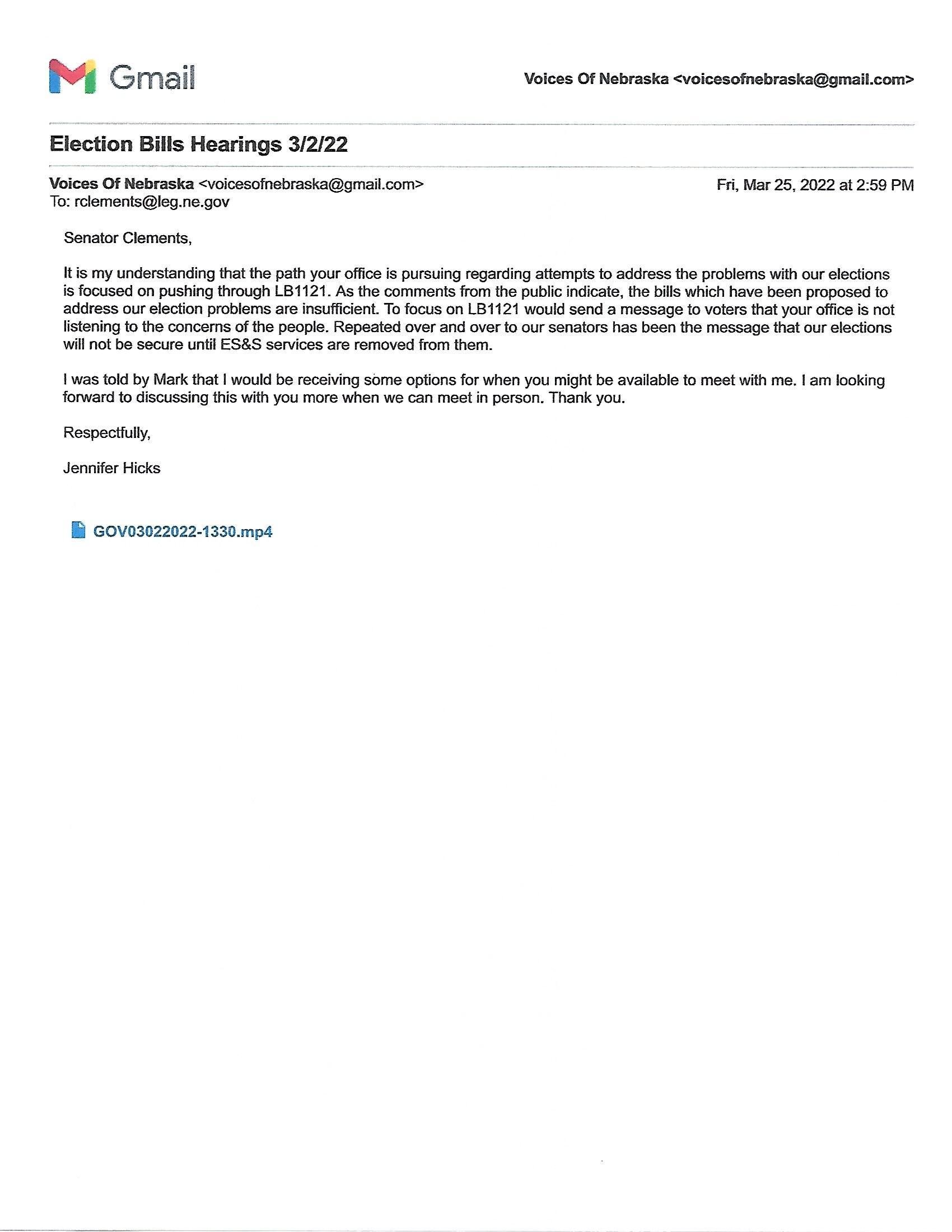 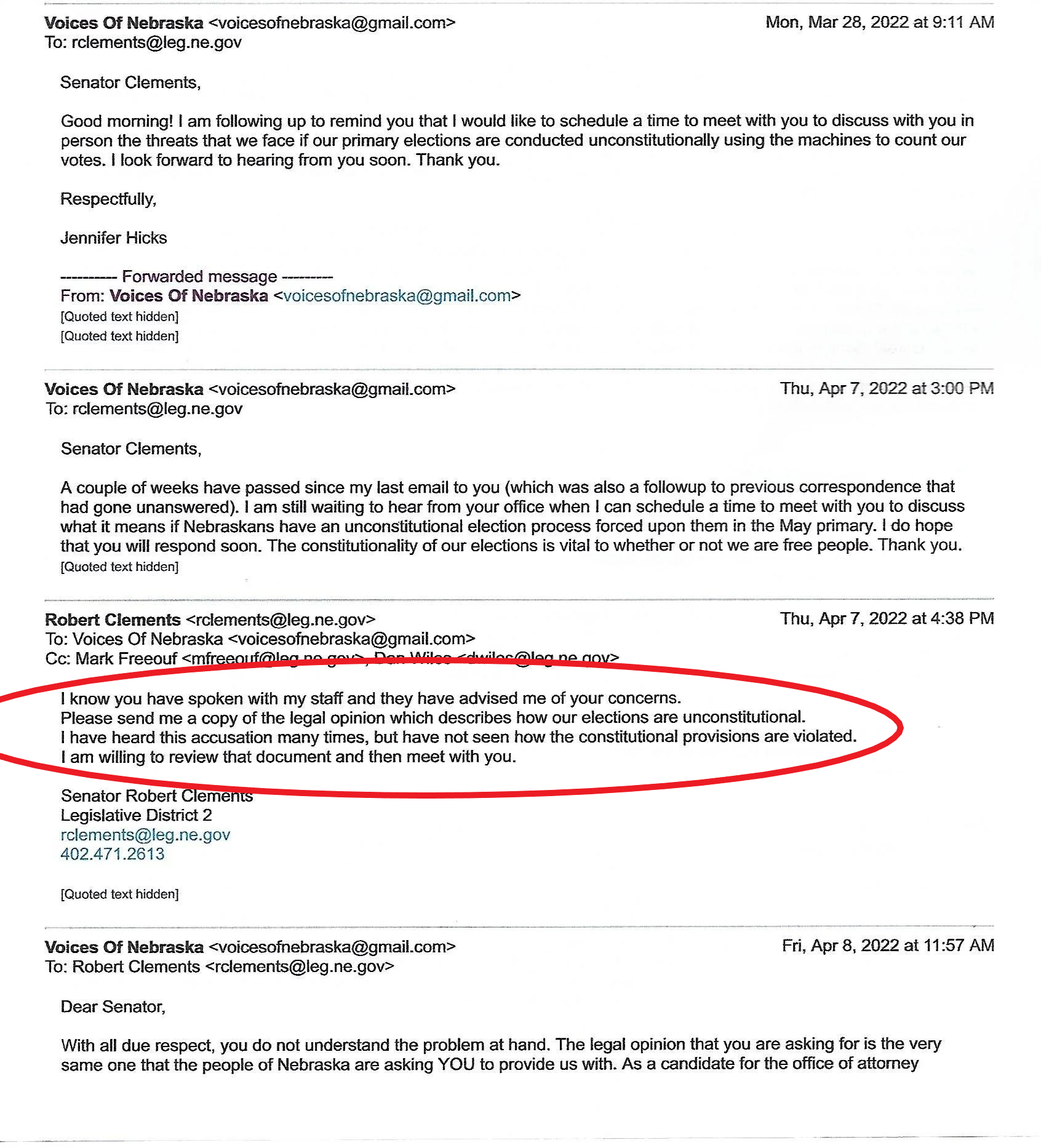 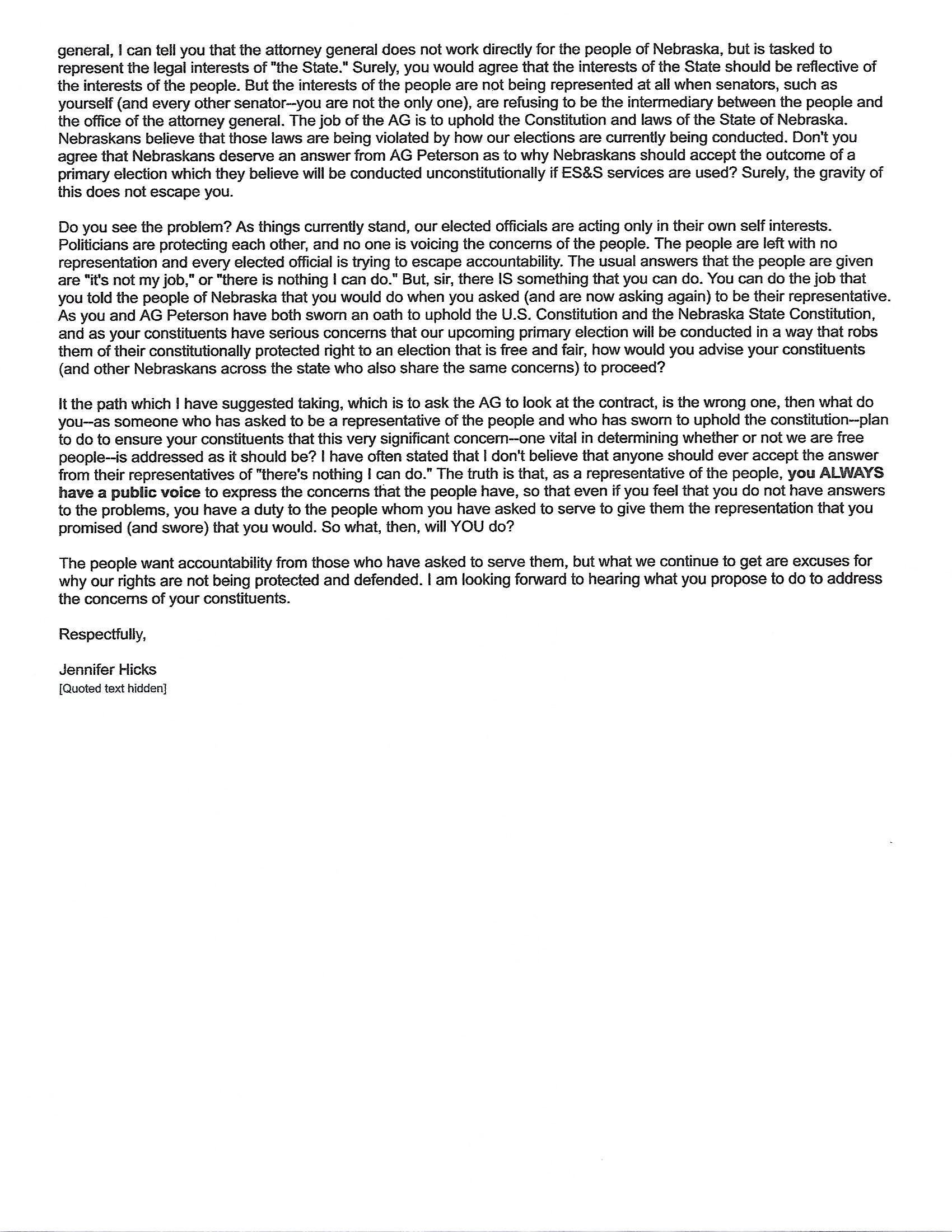 I've included this email to Halloran because it's a good example of the typical response I have gotten from our senators in the Unicameral. They ignore the letters that are written to them, and then when I confront them face to face at the capitol, they tell me to "please send it again." So this is just an example of that. They all do it. And I've written to every single one of them.

When I spoke with Halloran one day when I was at the capitol to give public comment on election integrity bills that were being proposed, he told me that if I wanted his help I would need to get other senators on board first. That'll never happen, though, because they are all a bunch of cowards who prioritize their political careers above doing what is best for the people. 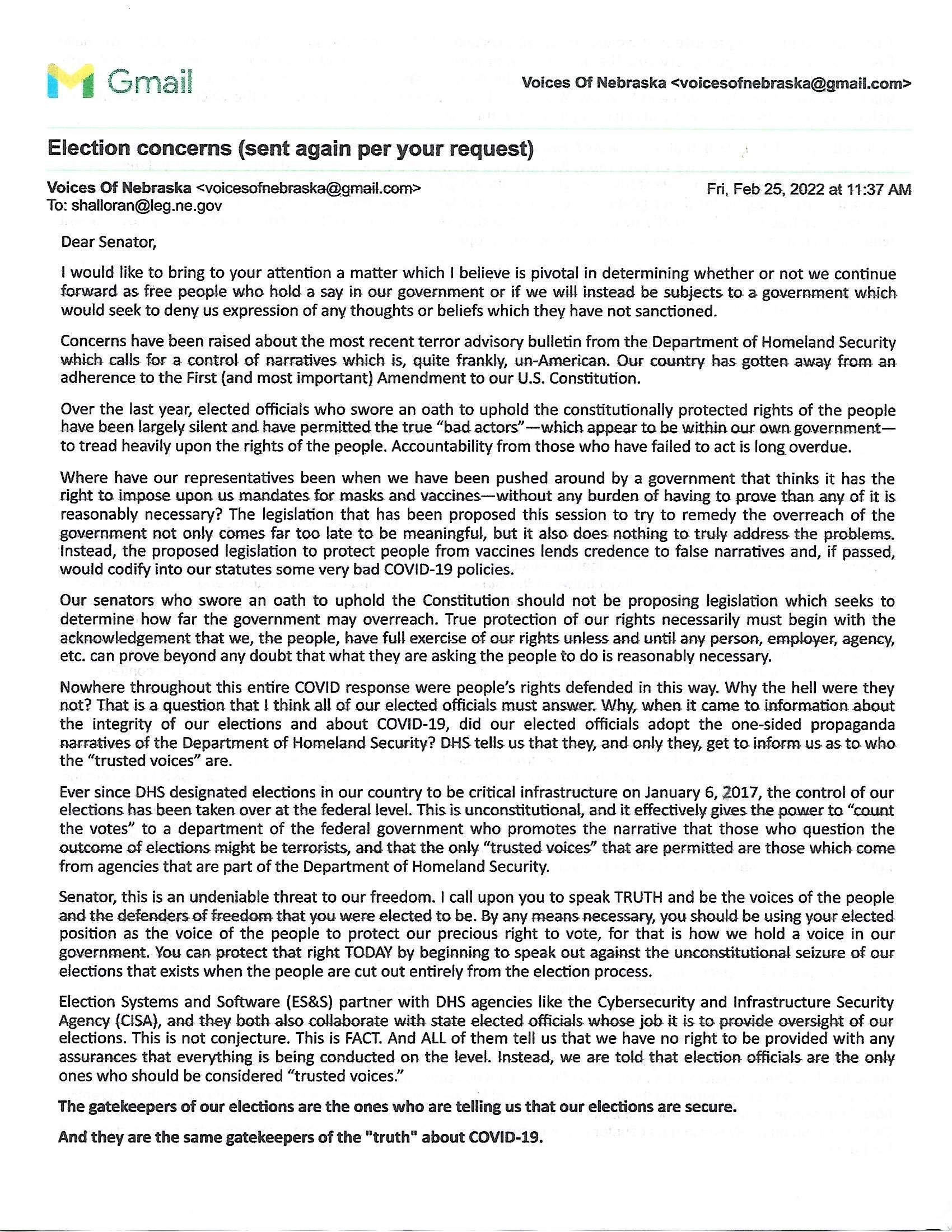 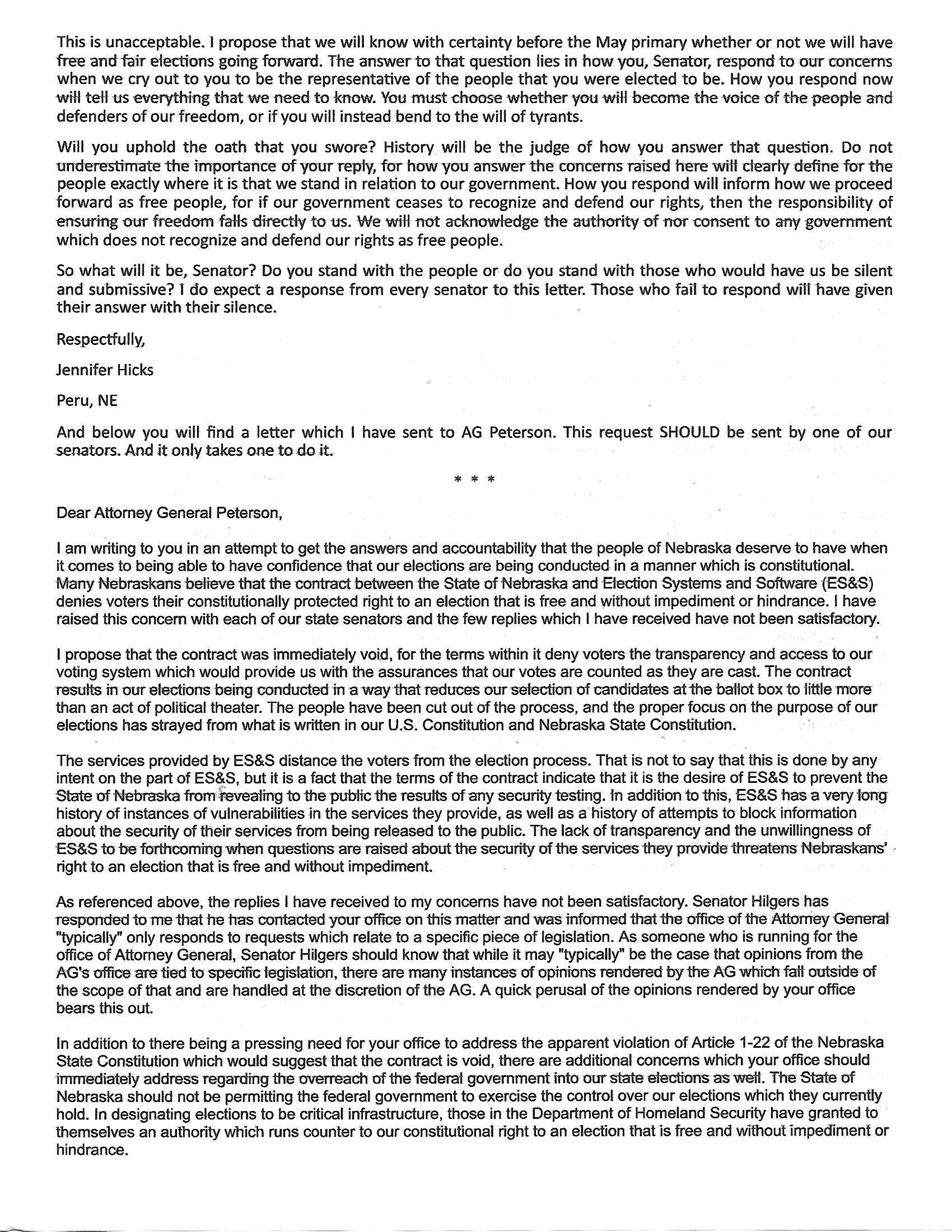 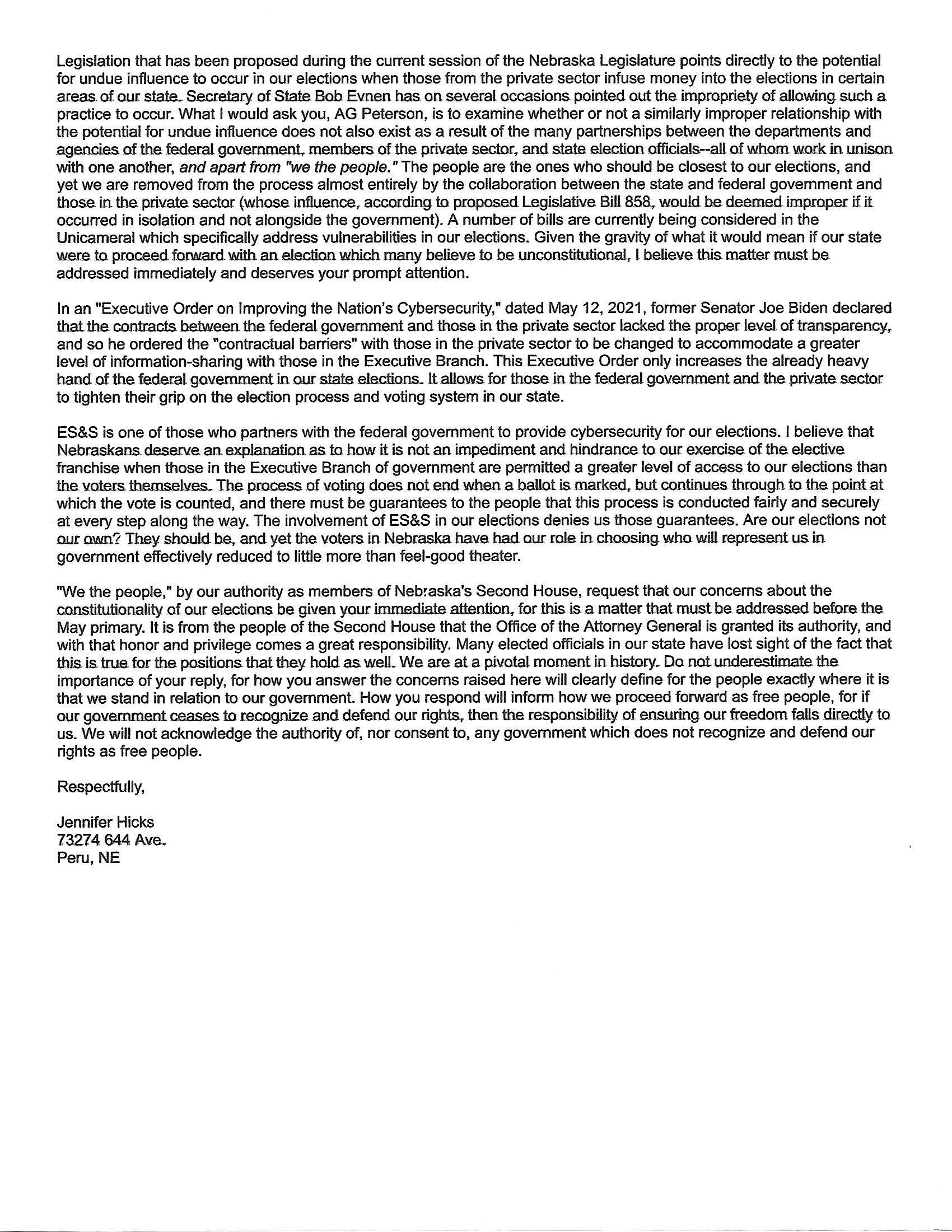 Here are just a few of the letters I've sent to my own senator (Slama). As you can see...nothing but excuses and ZERO representation of the people. 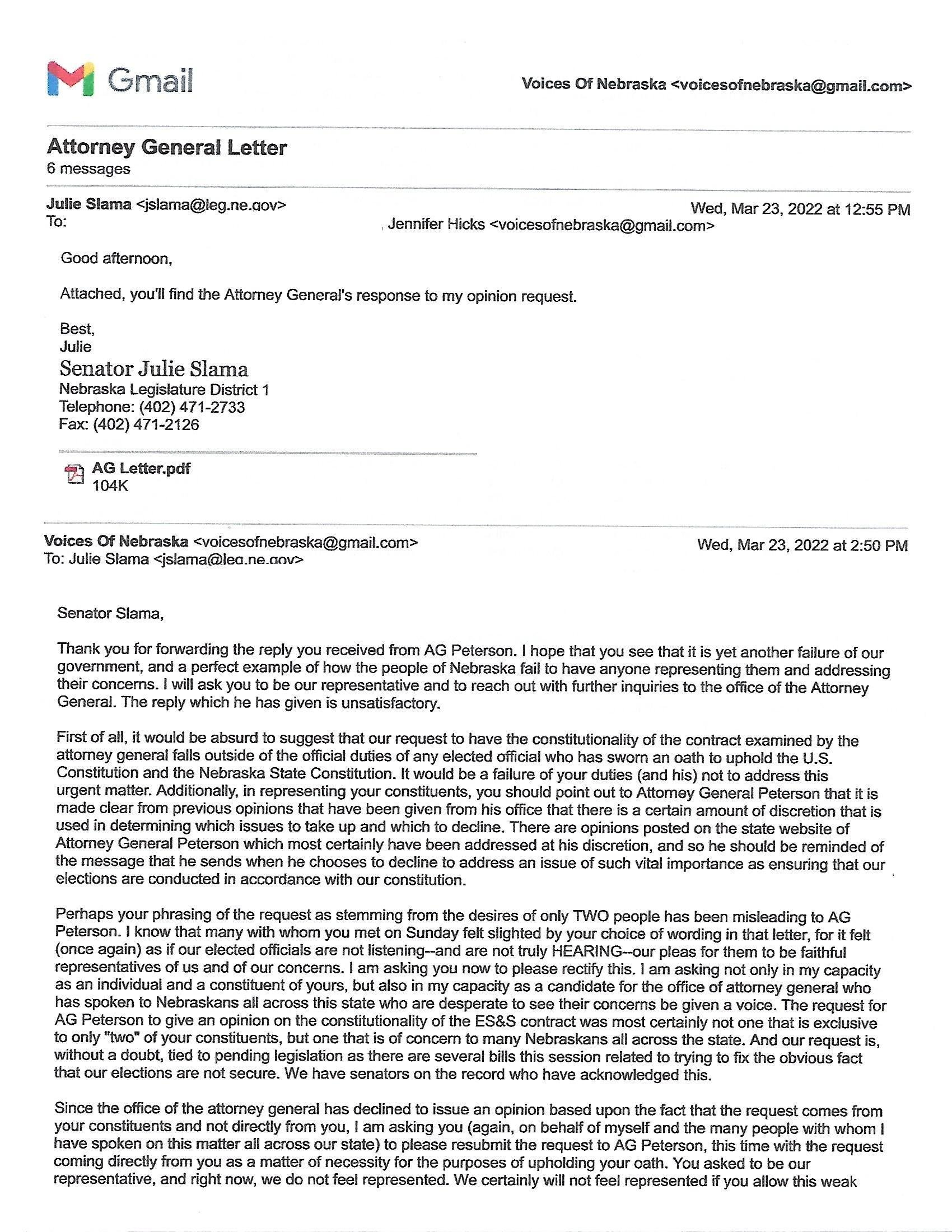 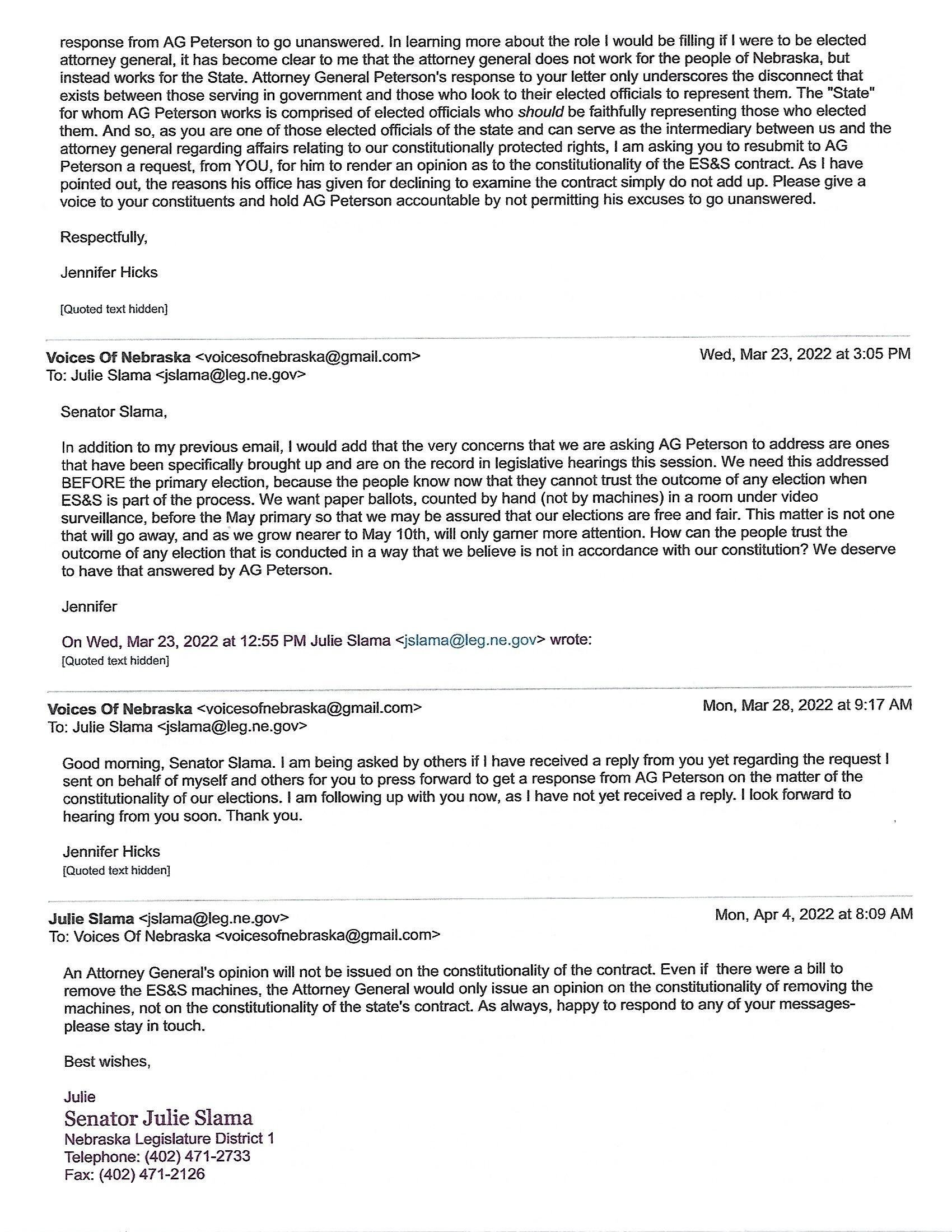 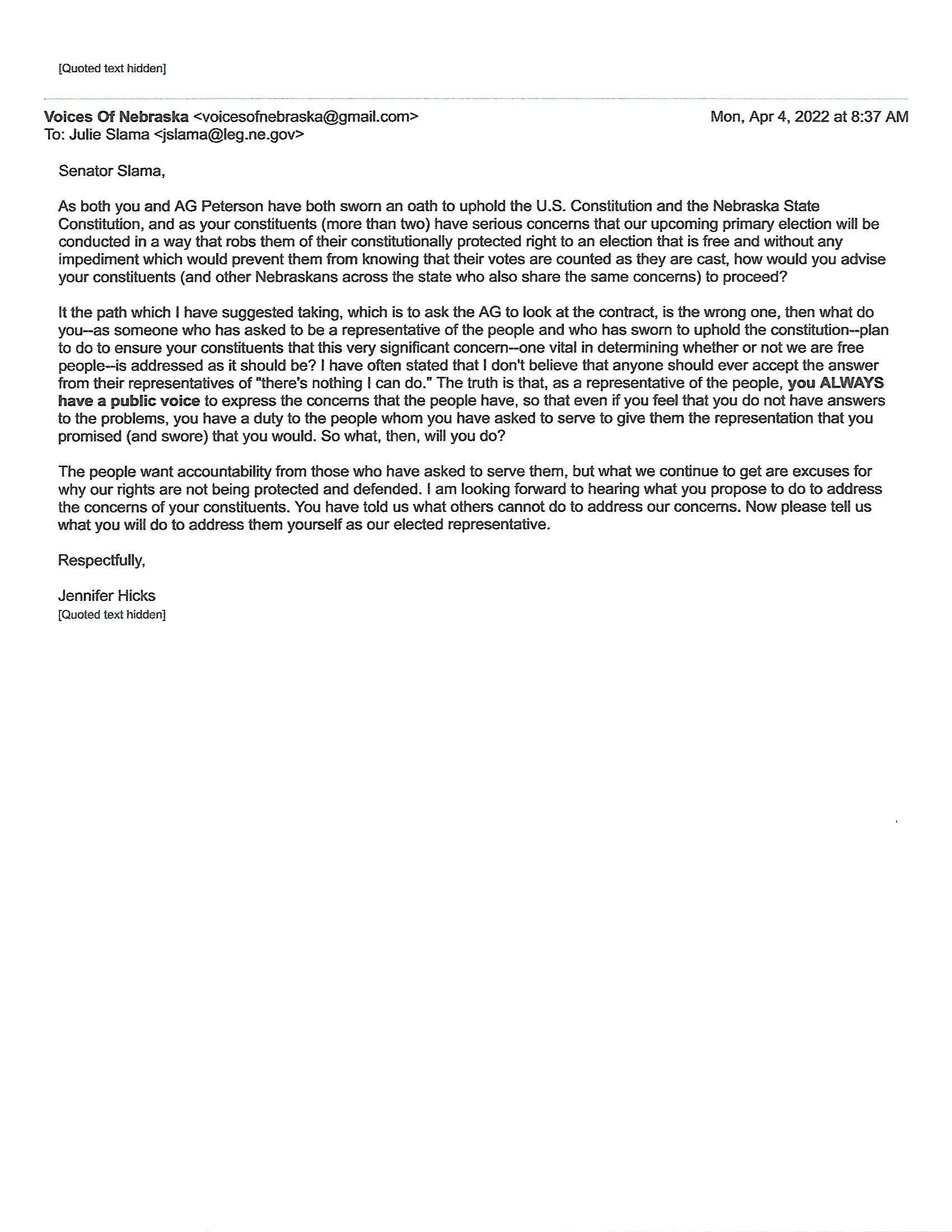 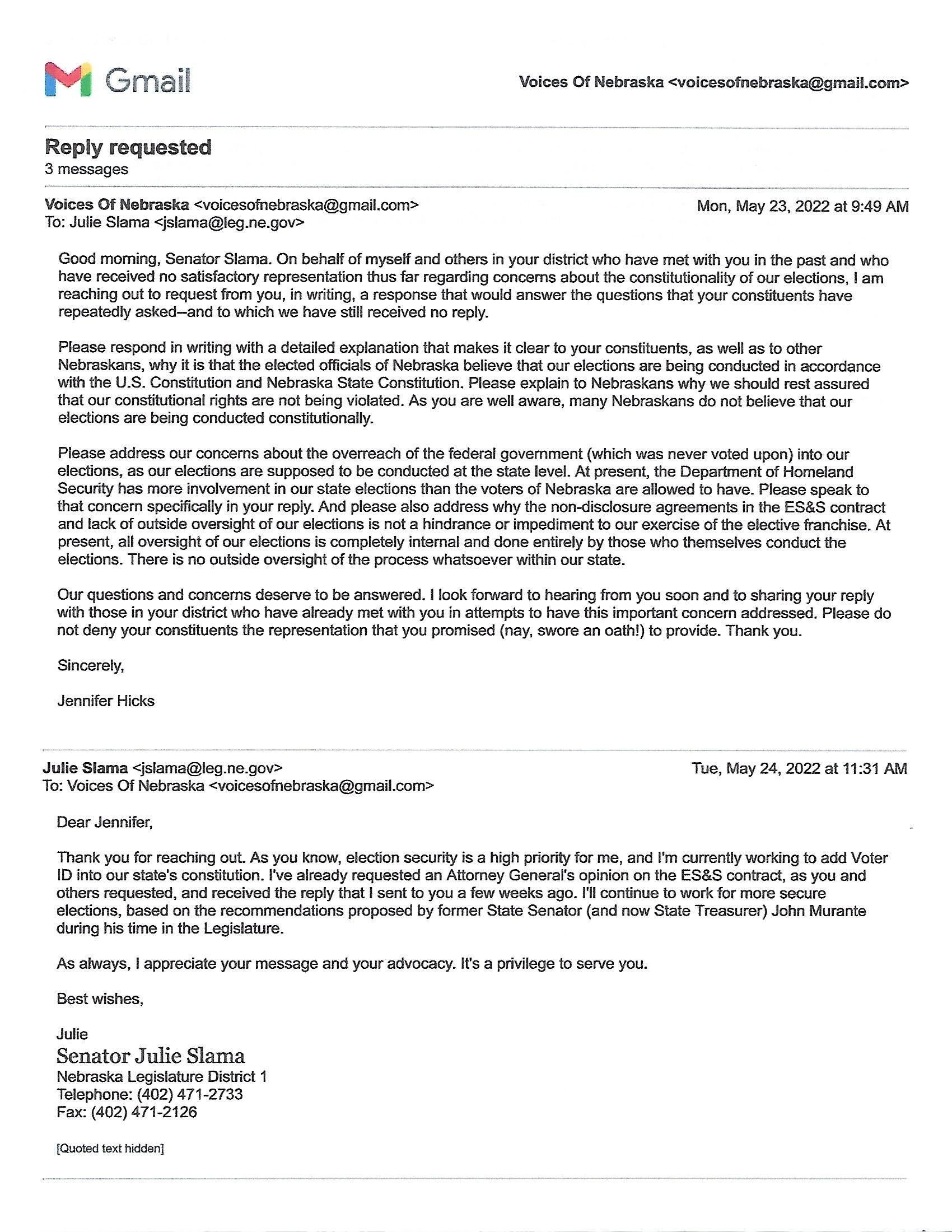 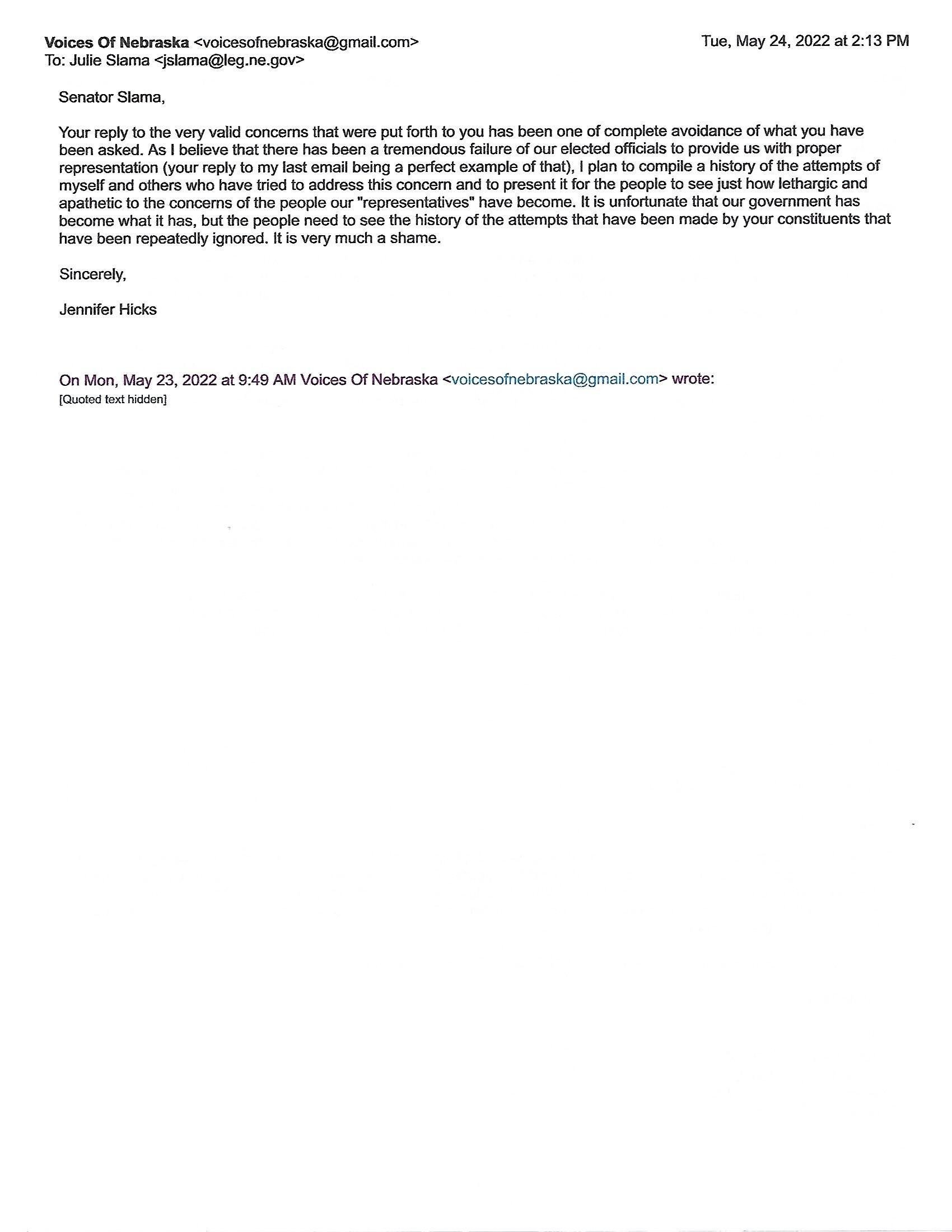 The letter which Senator Slama sent to AG Peterson was a slap in the face to the approximately thirty people in her district who had called a meeting with her and expressed concerns that the lack of transparency in our elections is violating our constitutional rights. Note that in the letter to the AG, Slama claims that the request only came from TWO of her constituents. 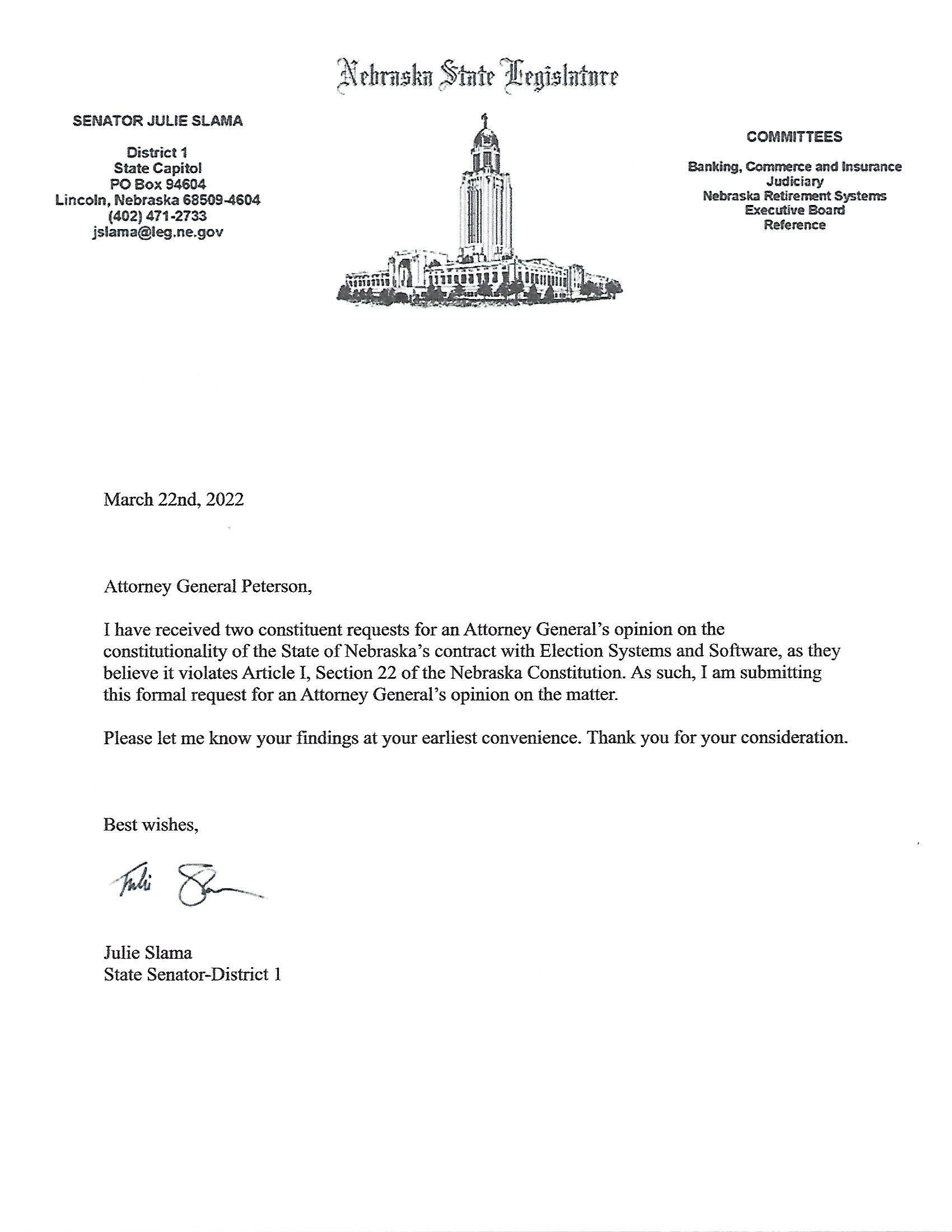 And this is a bullshit excuse from the AG's office for refusing to address this concern of the people. But can you blame him? To address the terms of the ES&S contract would be to incriminate the AG and other elected officials holding constitutional offices in our state. So basically, they are trying to hold us hostage by doing as they please and daring us to sue them if we want our constitutional rights to be upheld. But lawfare is not how we should respond. We shouldn't have to sue to have a free and fair election, and we should not permit our corrupted government to train us to respond in this way. With the two-tiered system of justice that we have, lawfare amounts to little more than a crap shoot anyway. What we should be doing is putting a boot in the ass of our senators to do their fucking jobs and be representatives of the people. 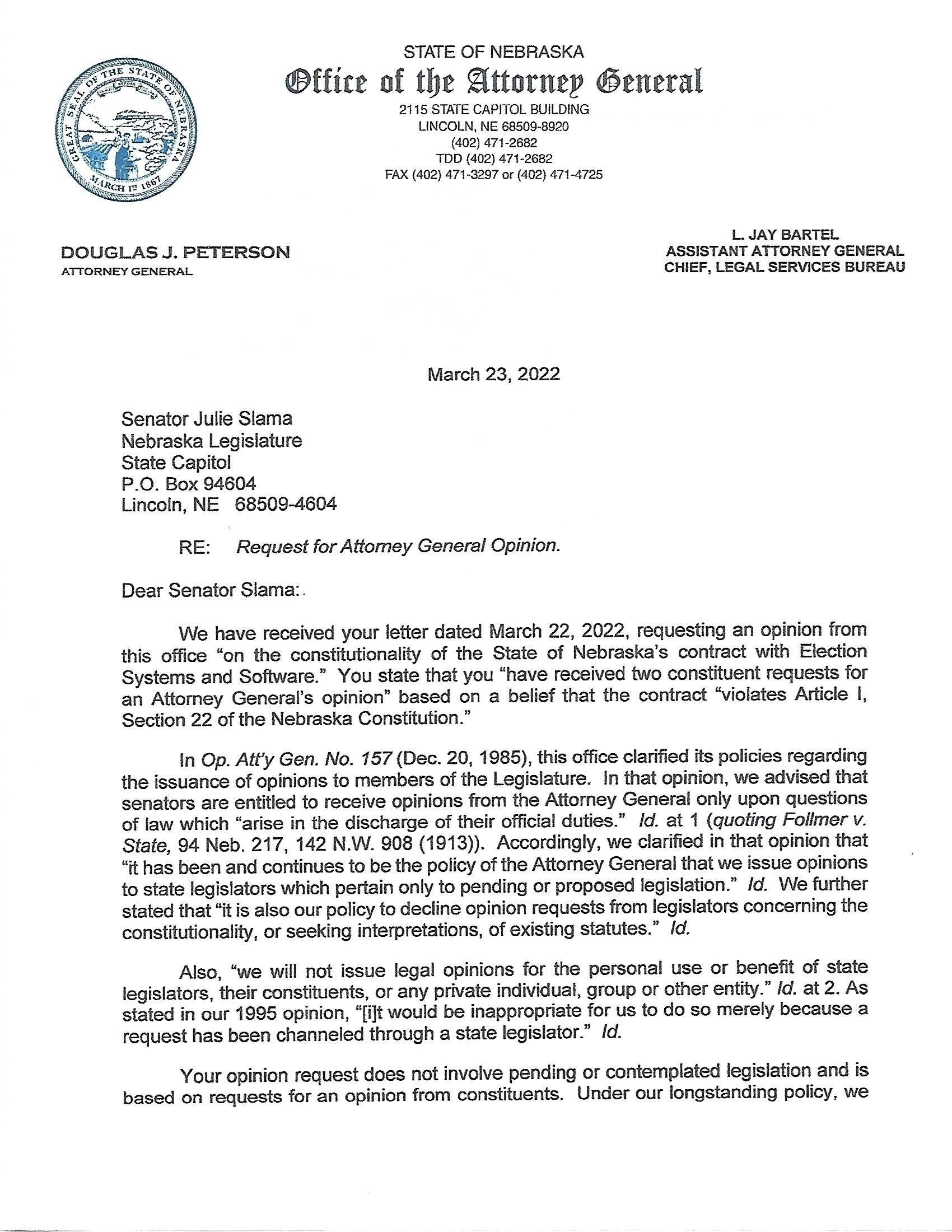 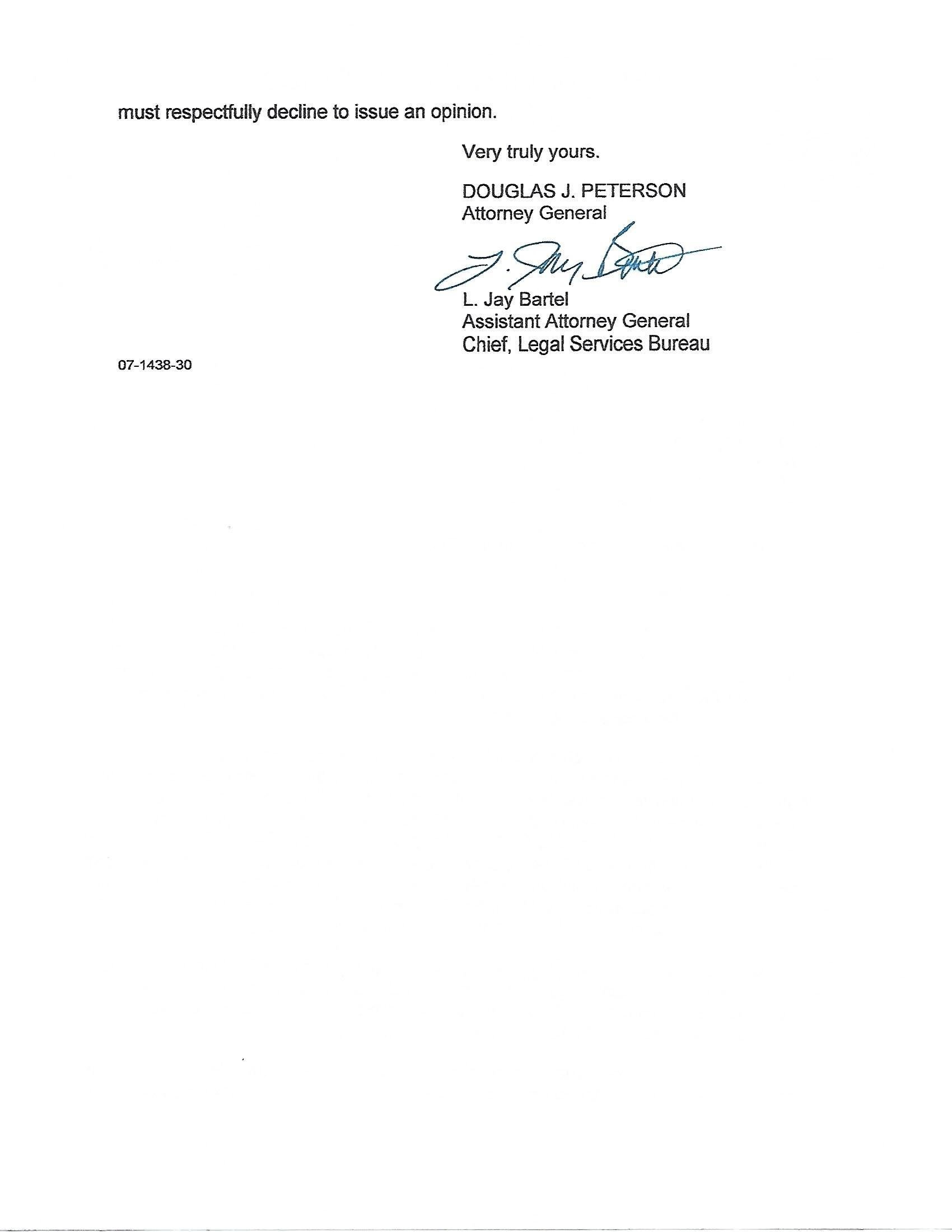 Below is a file containing all of the letters shown above. This is but a fraction of the MANY letters that I have sent to our elected officials. But the run-around, the finger-pointing, and the excuses are the same every time.

Download FileZIP • 10879KB
Oh! NOW it's "enough?"
Red Wave?
Why the hell hasn't this collusion between Big Government and Big Tech been front and center in the pursuit of election integrity?
Comments