This is garbage. And I say that as someone who doesn't trust Thibodeau and who has been critical of some of the tactics used by her campaign as well. But I will say that the addition of Loos to her team raises my esteem of her as a candidate. I don't trust her to be strong on medical freedom. I have stated that before. But I do know Trent Loos a bit, and I have NEVER found him to be anything less than genuine. I cannot say the same thing about Matt Innis.

Matt has a tendency to get nasty toward people. He engages in politics in ways that I refuse to. And this is an example. The only thing I really know about "Jessica" is that she is extraordinarily hated in the political arena. She may be an evil bitch. I have no idea. I only see what shows up in my notifications on Facebook, so if there are good arguments for why I should hate her too, then I haven’t seen them. I have heard MANY speak ill of her, but they’ve never said anything more to me than that they HATE her and that I should avoid her. I was also told by one of the gubernatorial candidates campaign leaders that if I didn’t stop doing what I was doing in politics, that the evil Jessica was going to ruin me the same way that she has ruined so many others. But, still, no details were ever given to me.

I have not changed my forthright approach to politics and I have never once encountered Jessica, so I do have to wonder if the “concern” that was expressed in the warnings about Jessica weren’t just attempts by others to try to shut me up. This Jessica may be straight out of hell, but she has never come after me and tried to ruin me, as I was warned that she would if I didn’t stop trying to shine a light on the nastiness of the Nebraska swamp. This is not a defense of her, because I don’t know her. But I can only judge her based on what I know. Some of the same people who hate her guts hate mine as well, so I know that some of her haters are not good people. They are people who purport to want to do away with the establishment elites, but all they really want to do is to replace them with themselves.

Matt seems to be pushing for Herbster of late, but he once was an "anyone but Herbster or Pillen" guy. Politics has become a business for him, though, with his tours and his memes, and so it is possible that the "opinions" that Innis expresses as his own are just part of the job. I don't know. But I do find it odd that Innis used to hate the idea of Herbster winning, and now he seems to have changed his tune.

People--put on your thinking caps and put your critical thinking skills to use! Could what Innis says be true? It could. But is it likely? Well, without substance to back up his claims, I would have to say no. I have proof to back up the things I say about people. But what Innis is engaging in seems to be pure speculation. If we knew nothing at all about Loos, then there would be reason to be suspicious of him. But I know that I am not the only person in Nebraska who has met him and who has found him to be sincere. (Again, I cannot say the same about Innis.)

If proximity to certain people and past associations with them are a damning factor, then Herbster himself has more ties to evil than Thibodeau does, for Trump has a decades-long history as a businessman that has placed him next to many whom we know are evil. And no doubt he has traveled with some of them at times as well. That does not mean that Trump is necessarily evil solely based upon a  history of proximity at times to those who are. And the value of Herbster to Trump (beyond their friendship, I mean) was that he had connections. It would be wrong to assume that Herbster is guilty by association of all of the same things that any of his connections may be guilty of. (It is also faulty reasoning to assume that Herbster's proximity and friendship with Trump makes him a better qualified candidate than the others.)

Associations are a starting point to begin an investigation to look for evidence. But they do not add up to much of anything unless we know more. I have heard Loos refer to Ricketts before as a friend. I admit that that caused me to be a bit suspicious of him as well. Anyone who is familiar with all that I have written knows well that I have been a very vocal critic of Ricketts. BUT, as I said, it is wrong to assume a person to be guilty by association unless there is something more to go on. If there is, then Innis should make his argument a substantive one. I can tell you that I have heard Loos be very critical of his "friend" Ricketts. He may have Ricketts' ear, but in conversations I have had with Loos, he has been very critical of Ricketts.

So even though his association with Ricketts is something that I have considered in my own evaluation of Loos, the conversations that I’ve had with Loos have gone far to alleviate my concerns about Loos calling Ricketts a friend. He has certainly been critical of Ricketts, both publicly and privately. I do not at all believe that they are in cahoots on anything, and I believe that Innis’s meme is only intended to cast doubts about Thibodeau and to gently nudge people toward Herbster by dropping his name. (There are many other choices for governor whose names will be on the ballot.)

This is just pure speculation that is put out there in an attempt to manipulate how people think about the candidates. Innis may put this out there as if this is just what he himself is thinking, but make no mistake--he gets paid for what he does, so it's hard for me not to assume that this meme is just part of the job for him.  The only thing that Innis says in this post that I agree with is that Pillen is the worst candidate. You can find my reasons for why in a video on my voicesofnebraska Rumble page, if you care to, but I don't say it without providing reasons for why I think so.

If I should hate Jessica, then tell me why. And if Loos is truly guilty of wrongdoing, then there has to be more evidence of it than has been presented here. Innis has said that people have to have their politics handed to them in bite-sized pieces that cannot be more substantive because people simply will not take the time to read something as long as what I have written here. He very well may be right about that. People give me hell for how long my essays are. But if we have become so shallow as that, then perhaps we have been dumbed down enough for The Great Reset to soon be completed. We are dangerously close, I can tell you that. The truth is what will set us free, but it will require our effort to seek it out. Our knowledge of politics should not come from political memes. If you feel that Innis’s meme holds truth in it, then feel free to comment below to add meat to the frail bones of the assertions made in his meme.

My choice for governor is obviously my Voices of Nebraska team member Michael Connely. But I want ALL of the candidates to have the opportunity to engage in a fair fight. Innis engages in politics in ways that I do not like. I will end my assessment of his approach the same way that I began it. This is garbage. 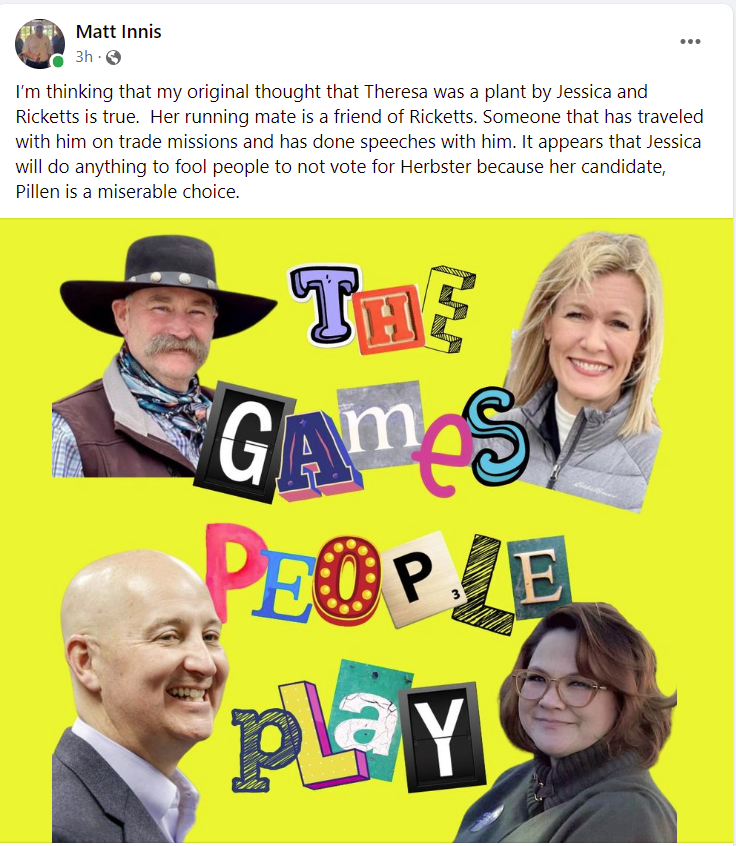