Tricky, tricky! Secretary of State Evnen is not doing his job.

Okay, so this just seems to be par for the course when it comes to how our government operates. It's always one excuse after another that they give to justify their own inaction.

Secretary of State Bob Evnen can't seem to make up his mind. His message in the past has been that he has failed to take action on investigating the integrity of our elections because he has not yet seen any proof that our elections could possibly be compromised. It is because Evnen has demanded that the citizens do his job for him that people have set out to try to do the work of ensuring that our voter rolls are accurate. The efforts that have been undertaken to do so are bipartisan. And why would anyone object to ensuring that our state voter records are accurate?

Having participated in some of the canvassing efforts myself, I can tell you that there is a lot of updating and cleanup of our voter rolls which should be done to close up potential doorways for fraud to occur. They exist, and I know this from my own personal experience of having voter activity show up under my own name in a state that I had moved away from. (I learned about it when family informed me I was being called for jury duty. It was the SoS in Arkansas at the time who told me that "I" had voted--twice, I think--since I moved away.)

But again, as it is the job of the Secretary of State to provide oversight of the conduct of our elections, the burden of doing the work should be HIS. He never should have expected the people to do it for him. And then, after attempts by the citizens are made to do the job that Evnen himself should be doing (because he put the burden on us), our Secretary of State turns around and spits in the face of those efforts with comments such as those on Twitter which diminish and cast doubt upon them.

The truth is that Evnen should be hit hard for his failure to act. And the argument that should be made to him is a simple one that has nothing to do with whether or not fraud exists. He can even hold to his belief that our elections are secure. But what he CANNOT do is fail to do his job. His duties are to provide oversight over the conduct of our elections, and our election process depends upon the people holding faith in the legitimacy of it.

The fact that there is widespread doubt should be THE reason that we demand that Evnen assure us that our elections are free from manipulation BEFORE the next primary. He has it all backwards to think that the burden of doing his job should be placed upon any of us. And we should refuse that excuse from him and demand that he do his job.

He claims to know that our elections are secure. That means that he must have the proof of it. The election process belongs to the people. Evnen MUST demonstrate to the people, in a clear and definitive way, the reasons why he can state with such certainty that our elections are secure. If it is so clear-cut and he is so certain, then let him put the concerns of the voters to rest, once and for all.

The reason that the burden must fall to him is because when people doubt the legitimacy of their election process, then they will doubt the legitimacy of any of those elected by that process to hold positions of leadership in our government. That is a VERY dangerous place for us to find ourselves in. We know there is a problem, and people already lack faith. I do not believe that we can survive another election with such uncertainty of outcomes.

The outcome of the November election has affected every single state. We all are suffering the direct consequences of it, regardless of the degree of fraud which occurred in any given state. (And what is coming out of other states DOES indicate widespread fraud occurred which could have affected the result of our national election.) Because every state in the nation has been harmed (if not by fraud, then by by dangerous doubts which are being allowed to go unaddressed), it falls to every state in the nation to contribute to the solution. Whether or not we continue to exist as a country depends upon it. Evnen should be pressed publicly and often to do his damn job. 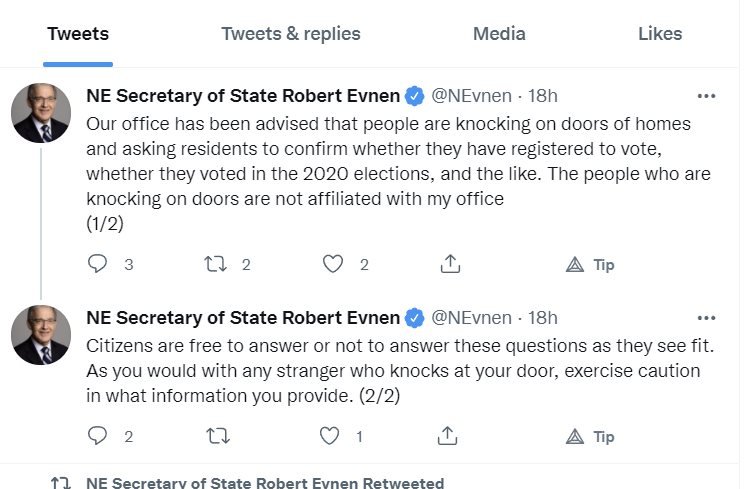