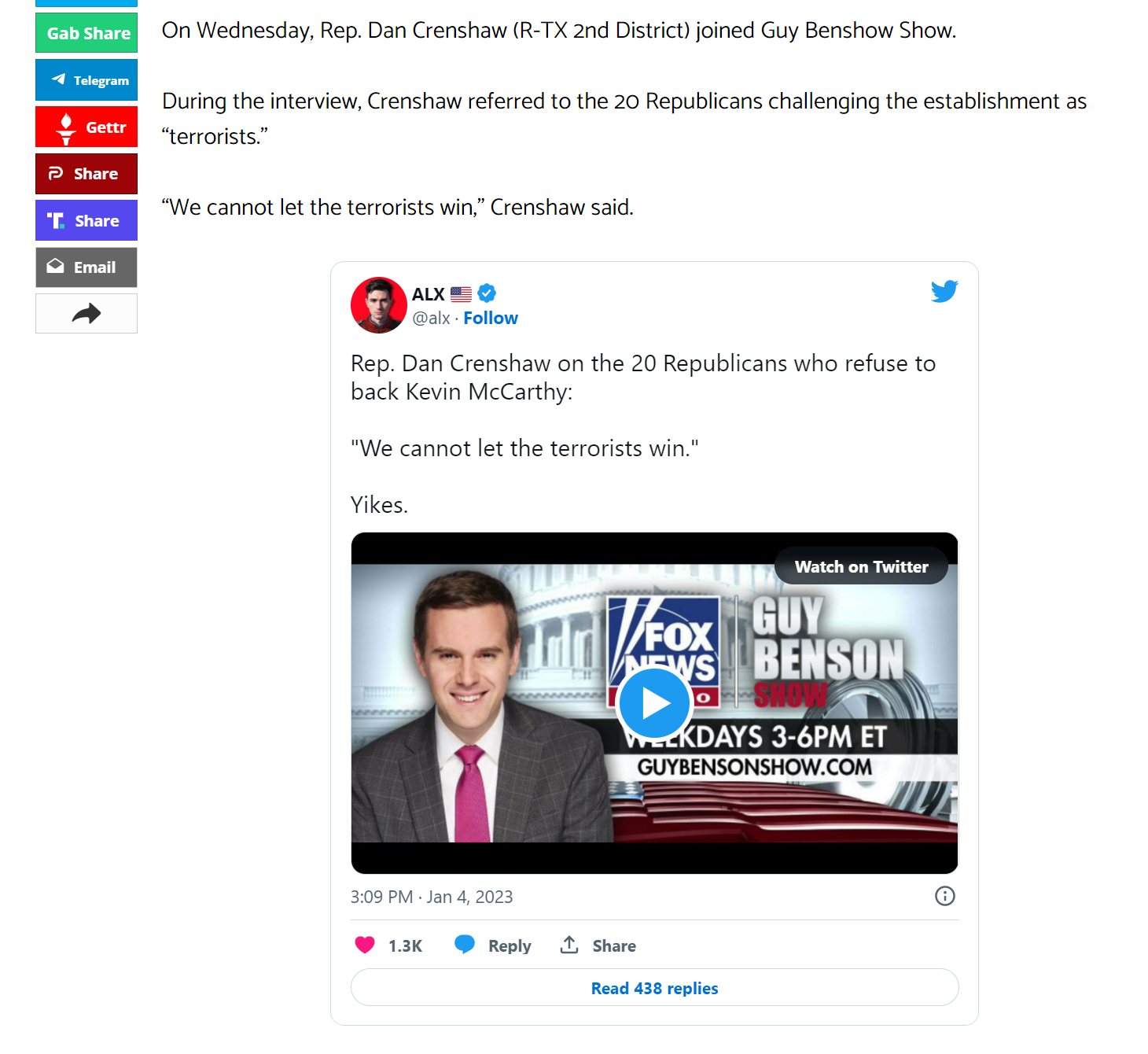 Fuck you, Dan Crenshaw. The article from The Gateway Pundit, from which these images were taken, can be read in full here: https://www.thegatewaypundit.com/2023/01/rino-dan-crenshaw-calls-20-republicans-refuse-vote-mccarthy-terrorists-video/.

Congressman Dan Crenshaw exemplifies everything that is wrong with the Republican Party. He is one of many Republicans who stands in the way of there every being true accountability. I'm sick to death of these asshole Republicans having the gall to call patriots "terrorists." Fuck them. I'll be damned if I will stand silent and let any of those fuckers label me and my defense of my rights as "terrorism." 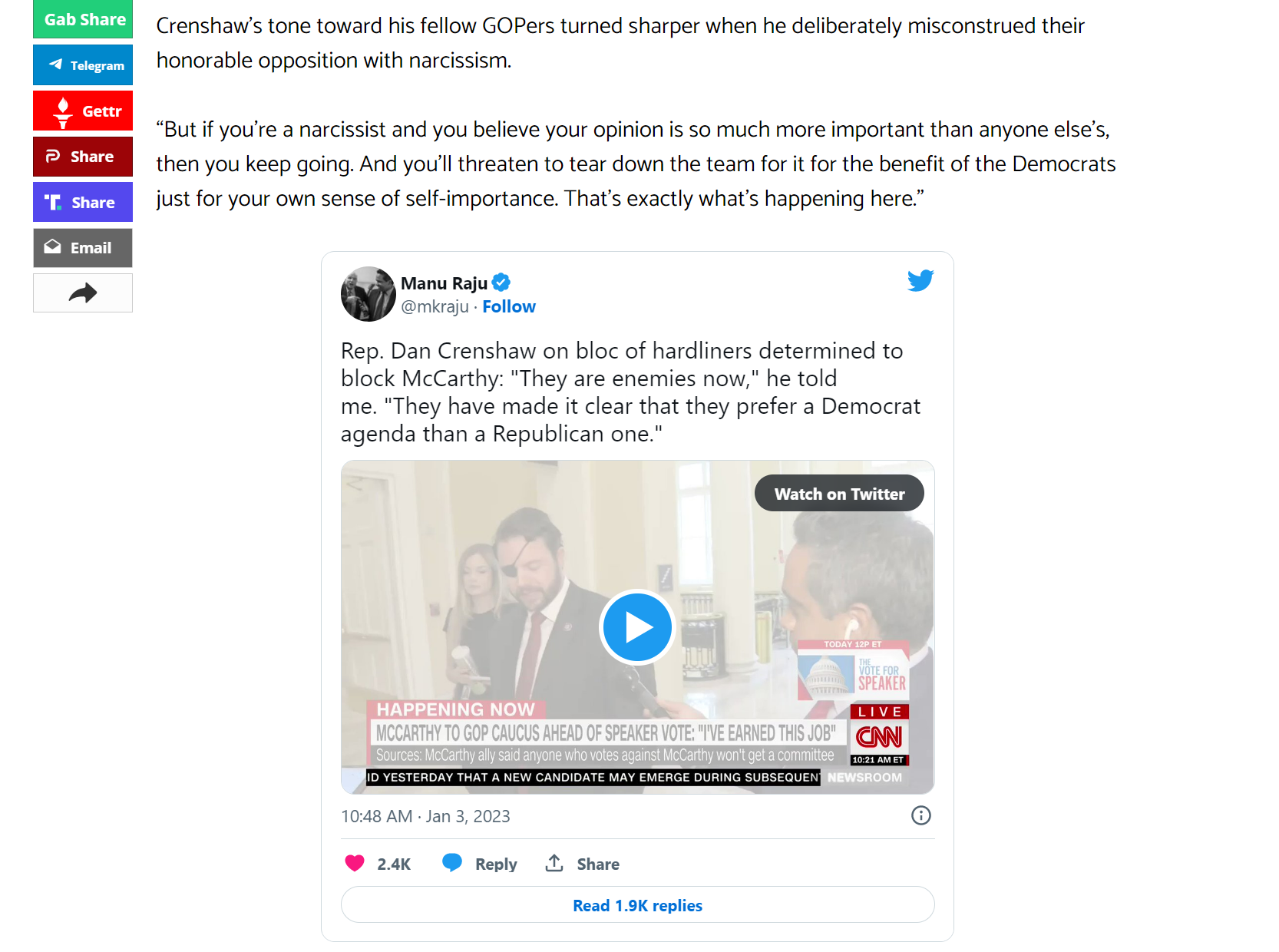 "Enemies," huh? Republicans like Crenshaw are no better than Democrats. The irony of him daring to say that those demanding accountability "prefer a Democrat agenda" and are narcissists is disgusting. He should be called out for it. In fact, every Republican who does this should. And it comes from Republicans in our government at every level, even right here in our own state. Just today I stopped by Senator Clements' office and spoke with his staff. Clements' Senior Legislative Aide, Dan Wiles, spoke to me exactly as Rep. Crenshaw is speaking here to his peers in the House--the ones he calls his "enemies now." Wiles said similar nasty things to me today when I was calling for accountability from our senators.

Listen in and hear for yourself.

Your government hates you. They don't hide the fact that they hate me. Hell, they often tell me to my face how much I am despised at the capitol. I'm fine with that. But rest assured, it isn't just me that they hate. They hate all of us who remind them that the job that they asked for required them to swear an oath. I am called "unreasonable" for expecting them to uphold that oath.You can find other videos detailing the corruption that exists in Nebraska's elections on my Rumble page or on voicesofnebraska.com. Decide for yourself who is being "unreasonable."

Politicians prefer to fight with "we the people" and defend their political peers. They view US as their enemy. I don't accept Wiles argument that I am trying to get people to accept MY truth. I believe that what I am advocating for THE truth to be heard. The truth is the truth is the truth. And, as inconvenient as it is for those who have permitted corruption in our government to go unchecked, the TRUTH (not my truth, but THE truth) is not going to change. We can have a discussion of HOW or WHY things came to be, but the WHO and the WHAT are known. We know FOR A FACT that Secretary of State Evnen has not been truthful with Nebraskans. Whether it was incompetence, negligence, laziness or for some other reason doesn't matter. We know WHAT happened and we know WHO did it. And since WHAT happened is something that wrongs Nebraskans and proves Evnen has not performed his job faithfully, then doesn't that merit an investigation into HOW and WHY Evnen ended up being untruthful will us? I believe that it does, and I do not think that such a request is an unreasonable one. Our senators owe it to us to do everything that they can legislatively to protect us from the overreach of a corrupt Secretary of State.

I pray to God that those courageous few who are standing up to McCarthy's known corruption do not bend or break. I am sure that they are up against a LOT of hate right now. I know how horribly I have been treated by elected officials in our own state--and, no, I'm not playing a victim. (Do I sound like a victim? It does get tiring, though.) I am a FIGHTER and I will not relinquish my rights to tyrants. The FIGHT that we are in now is to find out who in our government still has any integrity and will stand up and do what is right. I don't care how long it takes. We should never be compromising with those bastards. None of us should.

Sen. Linehan still won't respond to questions about Albert sensors used in our elections
Does your senator think you are trying to overthrow the government?
Be careful what you hope for
Comments