We are being "baited" in more ways than one

Here is an article from The Gateway Pundit written by Wayne Allyn Root. 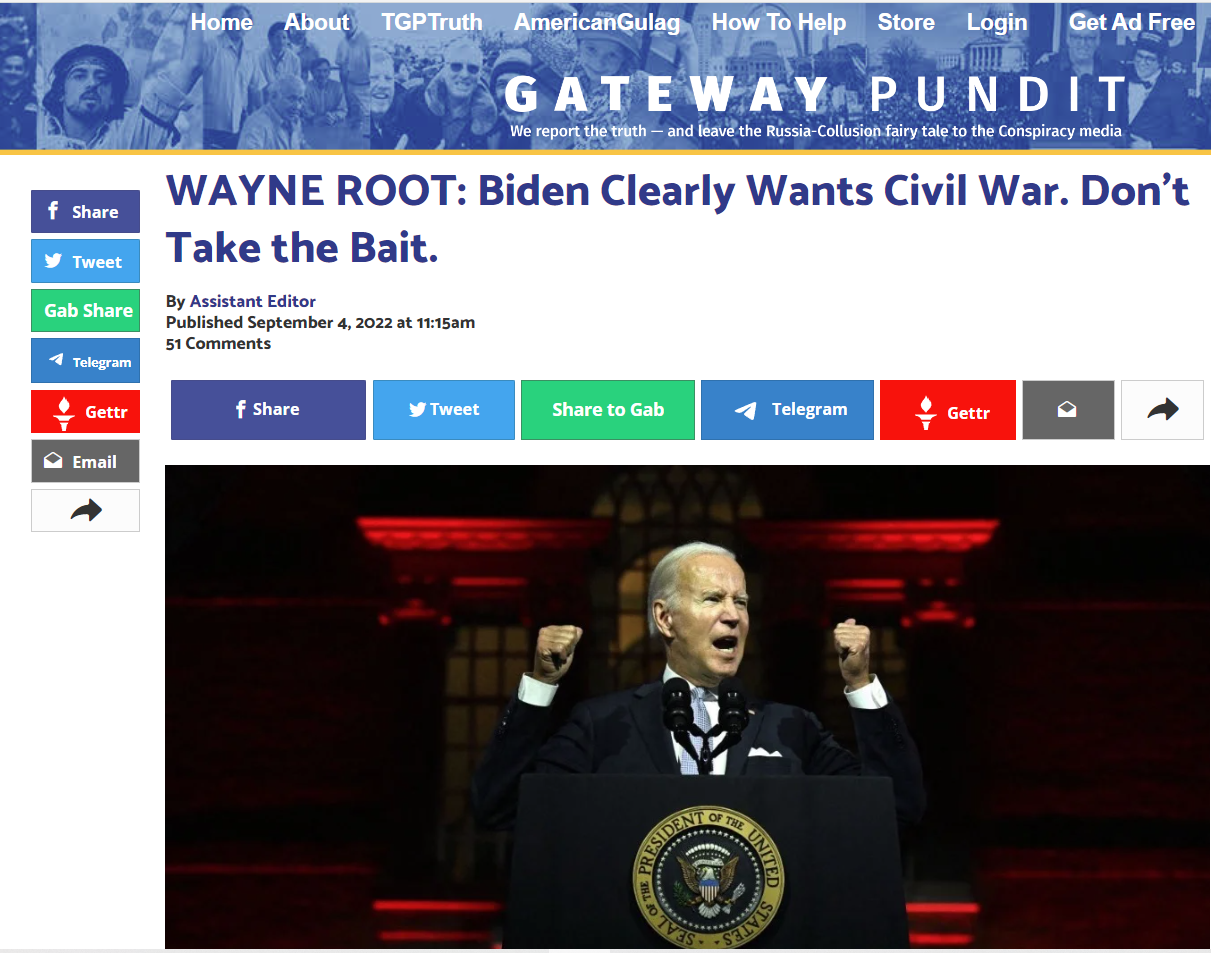 Most of his assessment is spot-on, but as I have pointed out before, these excellent analyses often unravel themselves at the very end. Almost every single time. Why is it that people cannot see that we cannot find solutions at the ballot box when our ballot boxes have still not yet been made secure? Are we really free people when the best we can do right now is to HOPE to "overwhelm" a corrupted system?

I say no. I think we are wasting our time and keeping ourselves distracted when we put our focus on the problems that are the result of corrupted government while failing to take on the root of those problems, which is the corrupted government itself. Any victories we obtain with regard to the fights for Second Amendment freedoms, or in opposition to CSE/CRT, or for medical freedom and our right to refuse a vaccine--all of those victories mean little when the tyrants who are infringing upon our rights are permitted to continue at the helm of our nation. (And anyone who has been paying attention will know that they are also at the helm in our very own state.) Until we strike at the heart of that, we will never win. We simply won't. And it all comes down to securing our elections. That is where our power was taken from us.

Our vote is our voice in government, and we presently have no representation--not even from Republicans. It was the Republicans who should have put up a fight against the tyrants, but instead they rolled over. The tyrants will never be held to account as long as they keep people convinced that the battle is one between Republicans and Democrats. It isn't. Promoting that narrative--which is exactly what Biden is doing and what the media does when they speak of "civil war"--keeps us all fighting against each other and failing to put up a fight against the tyrants who have usurped our country.

Who are they? We won't know until we flush them out. That requires us to make every representative in government accountable by forcing them to look us in the eye. We have failed to do that, and one of the greatest reasons that we haven't is because of party politics and party loyalty. I ran for a state office as a Republican candidate who believed that Republicans should be held to account. I ran for office because I felt unrepresented by the Republicans who had been serving in office and I believed we deserved better. What I was met with was party politics that PROTECT those in the Republican party who do not represent their constituents. Republican voters will never have a voice when the leaders of the GOP and those who continue to support the party continue to protect the party leadership and candidates instead of protecting the rights of the voters.

I think the left knows exactly what they are doing. Conservatives have proven to be pretty damn predictable and easily manipulated by the left. I see Biden's speech more as a tactic to keep people from daring to push back in any way at all. Biden is asserting a position and labeling anyone who opposes him as violent. There is more than one "bait" for people to take here. Very few (other than those who are part of a setup situation) would take the bait of violent action. But I suspect that many will take the bait of continuing to be cowed into silence. It's a replay of how they got people to comply using fear by labeling January 6 as an insurrection.

It's a "no lose" situation for Biden. The only way he'd lose is if people have finally had enough and are willing to take ACTION. (I don't see that happening.) That doesn't mean violence. But they've successfully convinced the masses that even speaking out against what they are doing is an act of violence. (Again, January 6.)

People will most likely continue doing what they've done all along--having cathartic bitch-fests with their like-minded peers, but never taking the fight to the tyrants (which is both Dems and Republicans) in the GOVERNMENT. This isn't a D vs R fight. And we won't ever win if we don't even know who it is we should be fighting. We also won't ever fight as long as we stay locked in the narrative that fighting equates with violence and that speaking out--or even just wearing the "wrong" shirt or hat--equates with violence too.

This speech from Biden will no doubt help to fill the coffers of the GOP and their candidates. Do you think that, even if we do "overwhelm" the fraud (which is our only real "hope," since the sorry-ass Republicans in office still haven't secured our elections), we will end up with enough Republicans in office who will suddenly find the balls to fight? I mean REALLY fight, and not just put on a show. I don't.

Guess which senator proposed redefining our "voting system" to include "software" in the "creating, casting, and counting" of ballots?
Senator Slama's response to election integrity concerns (She is no patriot)
We are not counterpunchers. (This is why we keep losing.)
Comments