Hmmm. See anything missing from this sample ballot? 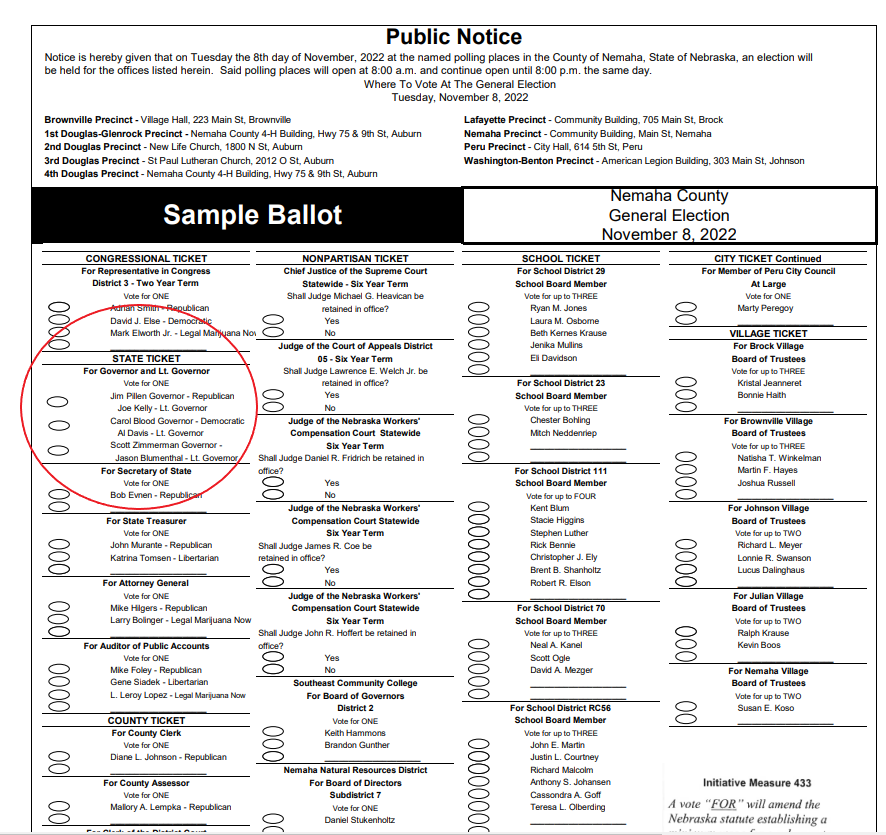 Check it out. The sample ballot for my county (found on the webpage for my county) shows a write-in line for every race EXCEPT that of the office of governor. Take that as another slap in the face from the corrupt Republicans who are currently running the show in Nebraska at a level that is damn hard to defend as being any less of a threat to conservatives than Democrats are.

I wonder whose call it was to do this.

Well, isn't this just another fine example of what a great job of providing oversight of our elections Secretary of State Bob Evnen is doing for us? (Note the sarcasm. I'll be darkening the write-in oval for Secretary of State, as there is no way in hell I would vote for Crooked Bob Evnen.)

And in case you aren't aware of why this sample ballot is a problem and a sign of corruption within our state--there are two candidates who have officially filed to run for the office of governor as write-in candidates.

I'm sure the write-in line will be there on the actual ballot. (It damn sure better be.) But make no mistake that this was meant to be a slap at the "little people" who would dare to think that they could try to go around the corrupt establishment who believe that THEY (and not the voters) are the ones who get to determine which candidates get elected. Do you think it was just a coincidence that the only race that didn't include a write-in line was the governor's race?

What a shitshow the politics in our state have become.

Given how our elections have been going, it's hard as hell not to be suspicious when the ONLY race without the write-in line on the Sample Ballot is the governor's race. And the way I see it, even if this was unintentional, it points to the sloppiness and negligence of how our elections are being run. My husband works a job that requires pretty much every action that they take to be peer checked for accuracy. We should have procedures in place to ensure that our elections are conducted with the same level of oversight to ensure that these kinds of "mistakes" don't happen. Ultimately, I think the buck stops with Sec of State Evnen, for it is his job to provide the oversight of how our elections are conducted in our state.

Oh, and do you think I heard back from the Secretary of State's office? Hell, no.

Dispelling the fear of "voting your conscience"
Is Pillen a guy who has YOUR back, or a guy who is only concerned about his own backside?
To those who are trying to shame and guilt people into voting for Pillen--shut up.
The values of the Republican Party are non-existent if they are not lived by those who profess to represent them
Don't pee on my leg and tell me it's raining
NEGOP: Meet the new boss; same as the old boss. (Nothing has changed.)
Comments