Senators have a duty to end Nebraska's circle of corruption. WILL THEY?

This was from a conversation I had with Governor Ricketts at a Voter ID town hall in Nebraska City in July. Usually, in order to get any answers from elected officials in our state, I have to show up to events at which politicians are scheduled to speak and speak to them there. They assume that if they ignore our calls and emails--or send a canned response that is never an answer to any questions that are asked of them--that Nebraskans will just give up and move on. But we shouldn't.

These elected officials work for us. They asked for the job of being public servants to the people, and it is the job of the people to provide oversight of those who work for us. We should know better than to trust that they are doing what they should without being checked in on. Employers who oversee productive work environments know that when employees are not being held accountable for the work they are expected to do, they will slack off and fall behind. The BEST that can be said about those who are representing us in government right now is that they just got lazy. Other explanations for why they have failed to provide proper representation to the people and protection of our rights point to deliberate corruption.

Our senators in the Unicameral have an opportunity right now to try to make amends for having slacked on the job. Any who do so in earnest should be forgiven, but no bull-shit half measures should be met with any praise! Clever employees will try to fool you into thinking that they are on the job when they are not. Words mean nothing without MEANINGFUL action, and if our senators continue to provide cover for the corruption which has taken place in our government, then they should ALL be held accountable as complicit.
This isn't going away, and the facts are not going to change. The facts point to inaccuracies, inconsistencies, and untruths coming from the office of the Secretary of State. The facts draw a clear delineation of right and wrong, and history will record which side of that line our senators choose to take.

They know better. Accept no excuses.

Note all of the government agencies who are listed in the joint statement letter claiming the November 3rd, 2020 election was the "most secure in American history." 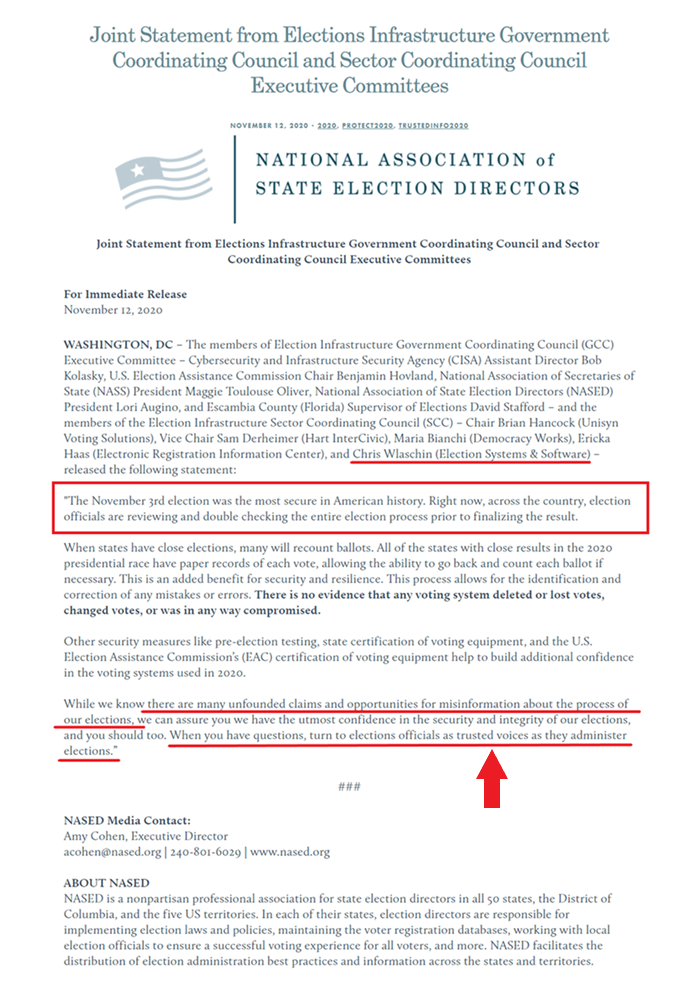 Will Republicans demand accountability or will they reward corruption?
Shouldn't we INSPECT the machines that count our ballots?
Secretary of State Evnen says trust election audits--but should we?
To secure our elections we must end unconstitutional federal overreach
Does Nebraska use an electronic voting system?
Letter to Senators to accompany Election Integrity Resolution
Comments