The Devil's in the Details

The official election results have been posted. And they are dishonest, inaccurate, and not at all transparent, for the "total votes" count shown is a lie. It does not include the aggregate total of write-in votes for registered candidates.

I hope that people who are concerned about the integrity of our elections will take the time to look at and listen to all of the evidence I share below of how our government is hell-bent on continuing to do whatever the hell they damn well wish. None of it points toward a government which has any interest in addressing valid concerns from voters. I know I am not the only person who has contacted the Secretary of State's office to inquire about the write-in votes not being counted.   I've posted many times about my correspondence with elected officials. Some of my critics say that my failure to get a response from our government is evidence that writing letters and making calls "doesn't work." Some would resort to lawsuits, which isn't necessarily bad, but given that those who know our elections are corrupt likely also know that we have a two-tiered system of justice, I believe that we need a better plan than to roll the dice by relying upon lawsuits to be the only solution to election integrity. I believe the answer is WE THE PEOPLE. I believe we must hold our elected officials accountable. We haven't done that. Not collectively. And I know for a fact that--if we want to have a chance in hell of securing our elections--it's going to take more of us doing it than have done previously. 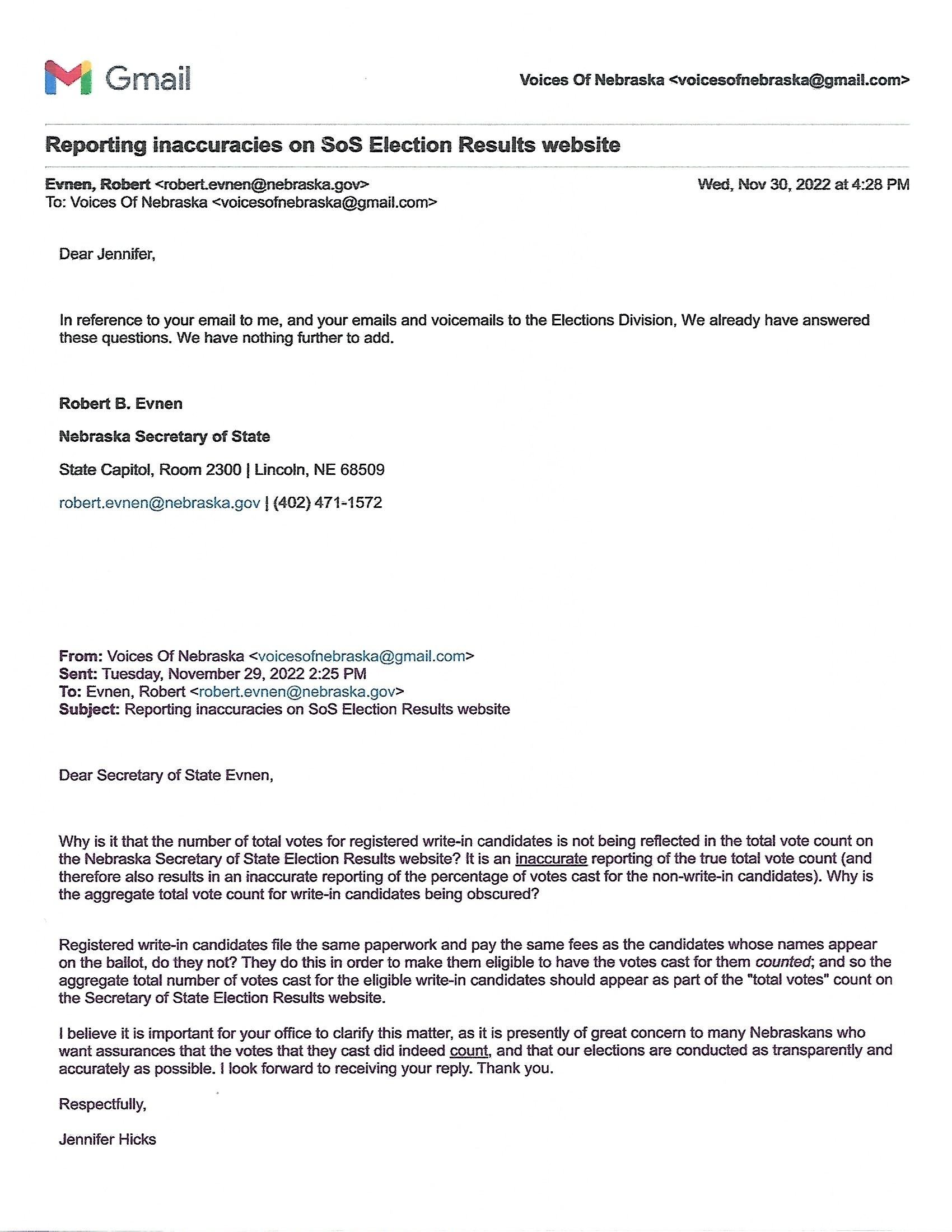 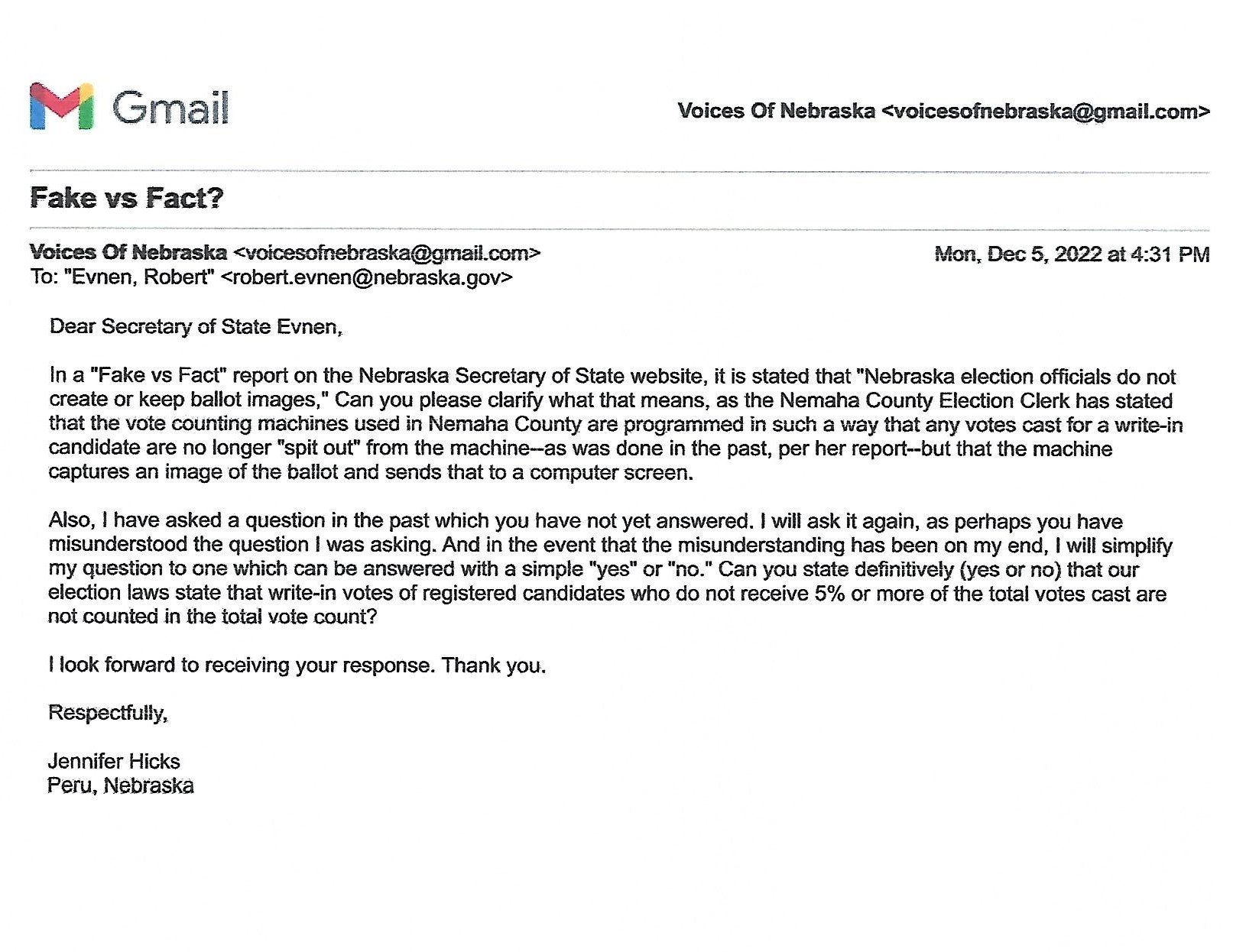 Above are two of the most recent emails which I have sent to the Secretary of State's office. The second email has still not received a response from Evnen, but I did call today and speak with the Assistant Deputy for Elections, Andrew Buller. If you take the time to listen (below) to that call and to the call I made to the AG's office regarding the write-in votes, you'll see just how much our government "talks back" to us and--like an obstinate, undisciplined child--says "uh-uh," when asked to answer.

As Evnen's irritated response would indicate, I've contacted them more than a few times. You know what? We ALL should be irritating them as much as we can. The corruption continues because we allow our elected officials to remain comfortable. We must be willing to make them as uncomfortable as they are willing to make us. What I am talking about is entirely peaceful. To restore the proper relationship that is meant to exist between the people and the government in a nation that is meant to be of, by, and for the people, we must make them answer to us. And nothing makes politicians more uncomfortable than having to answer a question. It is wholly unacceptable for them to think that they don't have to, and what keeps them comfortable is our failure to make them do their jobs. Questions are easy to evade when they know it is but a few who are asking. As I've said many times before, it doesn't matter how many of us there are, a silent majority holds no power.

Please take the time to look at and listen to these examples of what it is that your government thinks of you. You'll find plenty more condescension toward the people from elected officials in other posts on the voicesofnebraska.com website as well. We get what we accept, folks. Do you find any of this to be acceptable? What the Secretary of State's office and the AG's office are saying to Nebraska voters when they refuse to provide answers to very valid questions that are being asked is that the VOTERS "don't count" either. Election integrity will never be restored until our elected officials are made to answer to us.

Learned Helplessness (and The Little Engine That Could)
America is broken (and broken things don't fix themselves)
GOP "grassroots" leaders threaten election integrity efforts
Reclaim Self-Governance
The watchfulness of the citizen is the salvation of the state. (We have to start being honest with ourselves.)
Accountability, God, and the Importance of a Strong Foundation
Comments