Why does Evnen keep saying write-in votes "will not be counted?" (Statute says they "shall.")

Secretary of State Evnen is obscuring the truth about how write-in votes are COUNTED. As seen in his reply to a voter below, he has more than once stated that the write-in votes for registered candidates don't "count." This is not what our statutes say, though. So why such a lack of transparency? 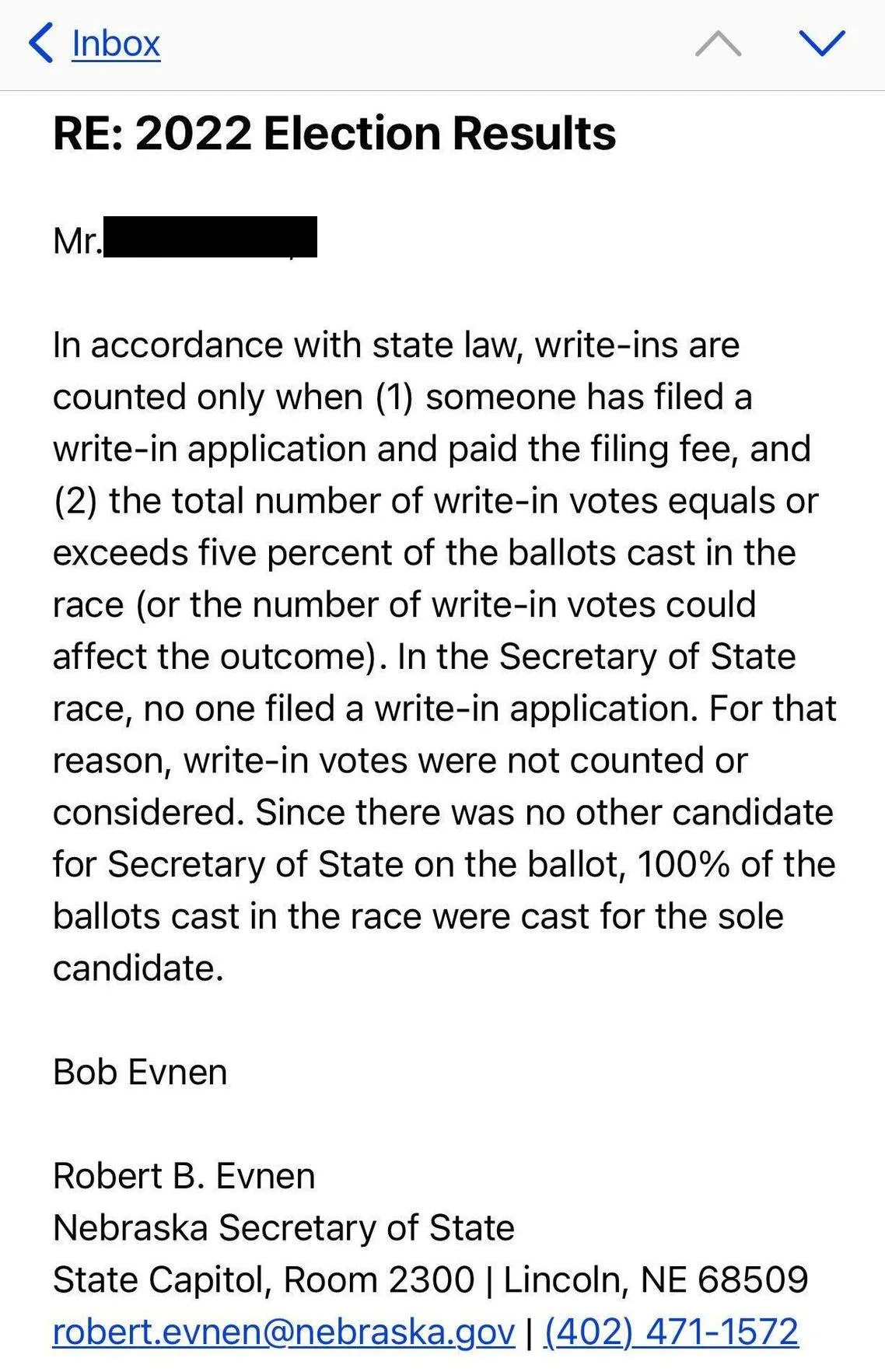 I have seen a few detailed reports of county level results which ARE showing the total vote counts accurately. So why isn't the Secretary of State's Election Results website reflecting that, too? I understand that the argument being made by Evnen is that the 5% threshold was not met, but the statute referencing the 5% threshold only dictates HOW the write-in votes are COUNTED when that threshold is not met. It does NOT say--as Evnen has repeatedly claimed--that those votes "don't count." The number of write-in votes cast in the race for governor should be reflected in the number of total votes cast.

Look, I get that some people will argue that we shouldn't put too fine a point on it, since the outcome of the elections would not be affected. (So, no big deal, right?) Except that it does matter, because this info being put out by the Secretary of State Election Results website is a distortion of  the true known total vote count (and therefore also results in an inaccurate reporting of the percentage of votes cast for the non-write-in candidates). The total vote count for governor on the Secretary of State website doesn't match up with known total vote counts as reported at the county level.

Some may wonder why this matters so much to me, as I did not vote for either of the write-in candidates for governor. The reason that this matters and that everyone should be aware of it is because it is more evidence of the lack of transparency that we have in our election process. Is what Evnen is doing legal? Perhaps so. Perhaps not. Ballot harvesting is legal. But it is also corrupt. So Evnen's response that the aggregate total of write-in votes will be reported in the Canvas Board report do not absolve him from being guilty of a lack of transparency with regard to a failure to report to the public numbers which are admittedly known (for how else would we now that the 5% threshold was not met), yet not being reported. And, again, I would point to the inaccuracy of reporting that is reflected when the reported percentages of votes cast for non-write-in candidates is based upon a number which does not include the true count of total votes cast.

We would not accept these kinds of inconsistencies in reporting of numbers from our bank, and it is not unreasonable for us to expect our elections to be conducted with the same assurances of accuracy. 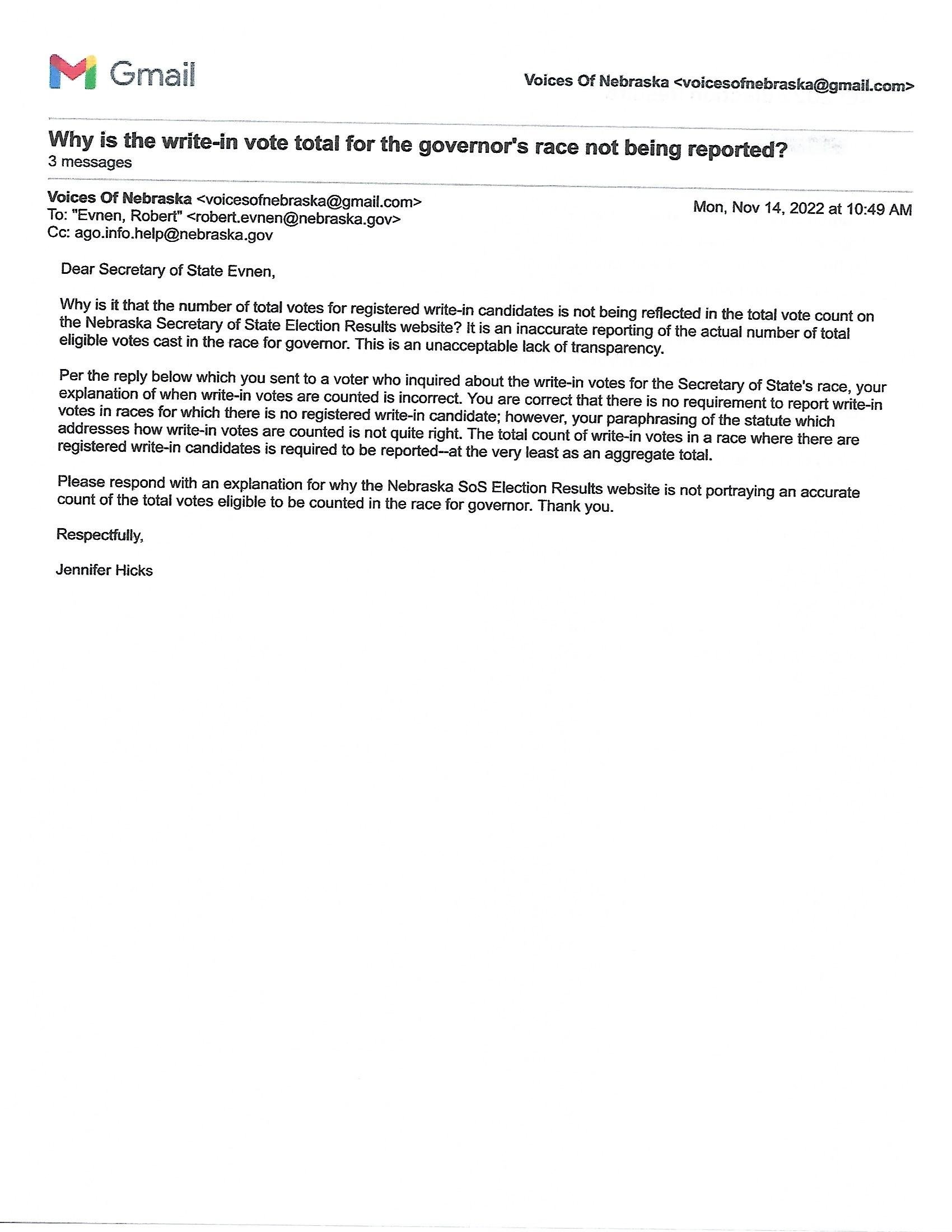 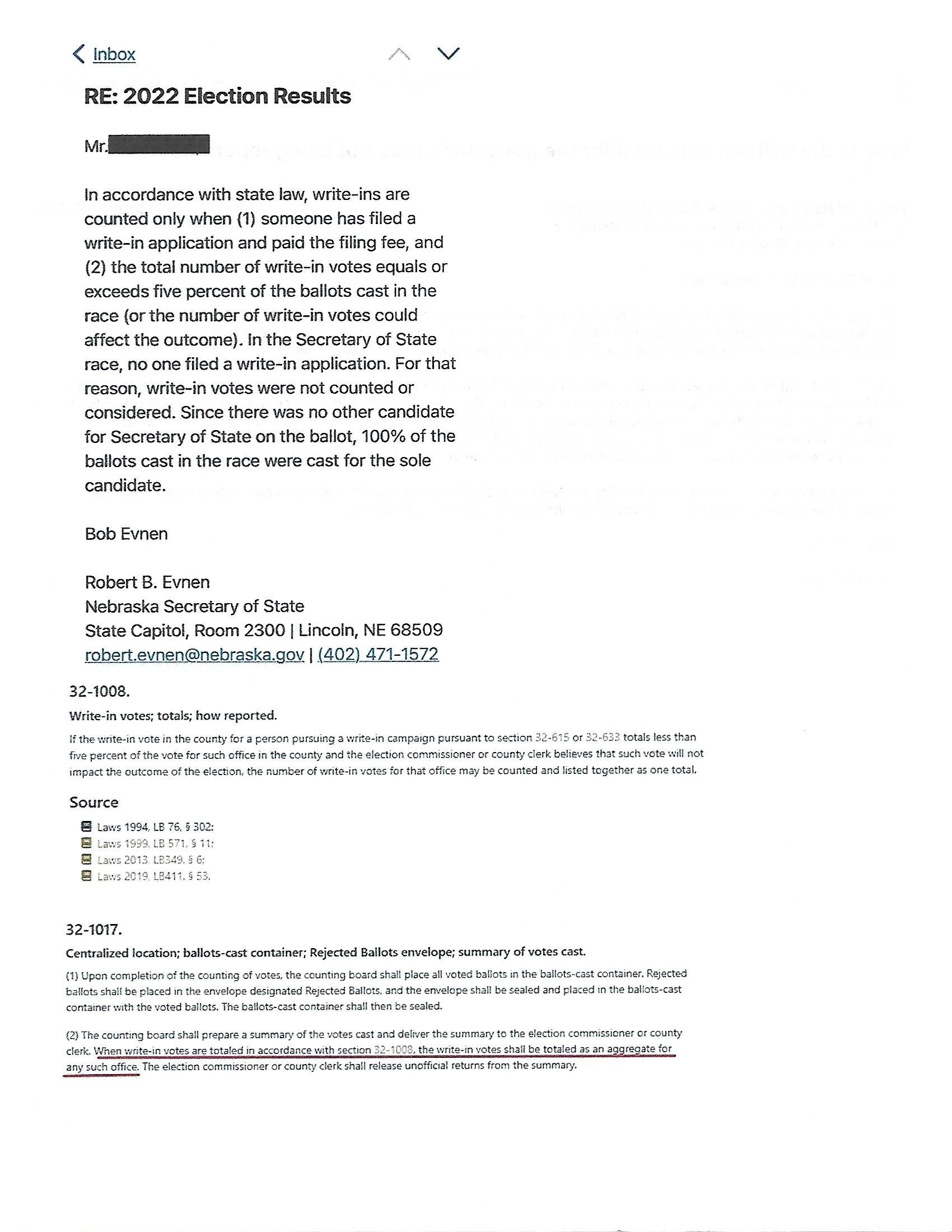 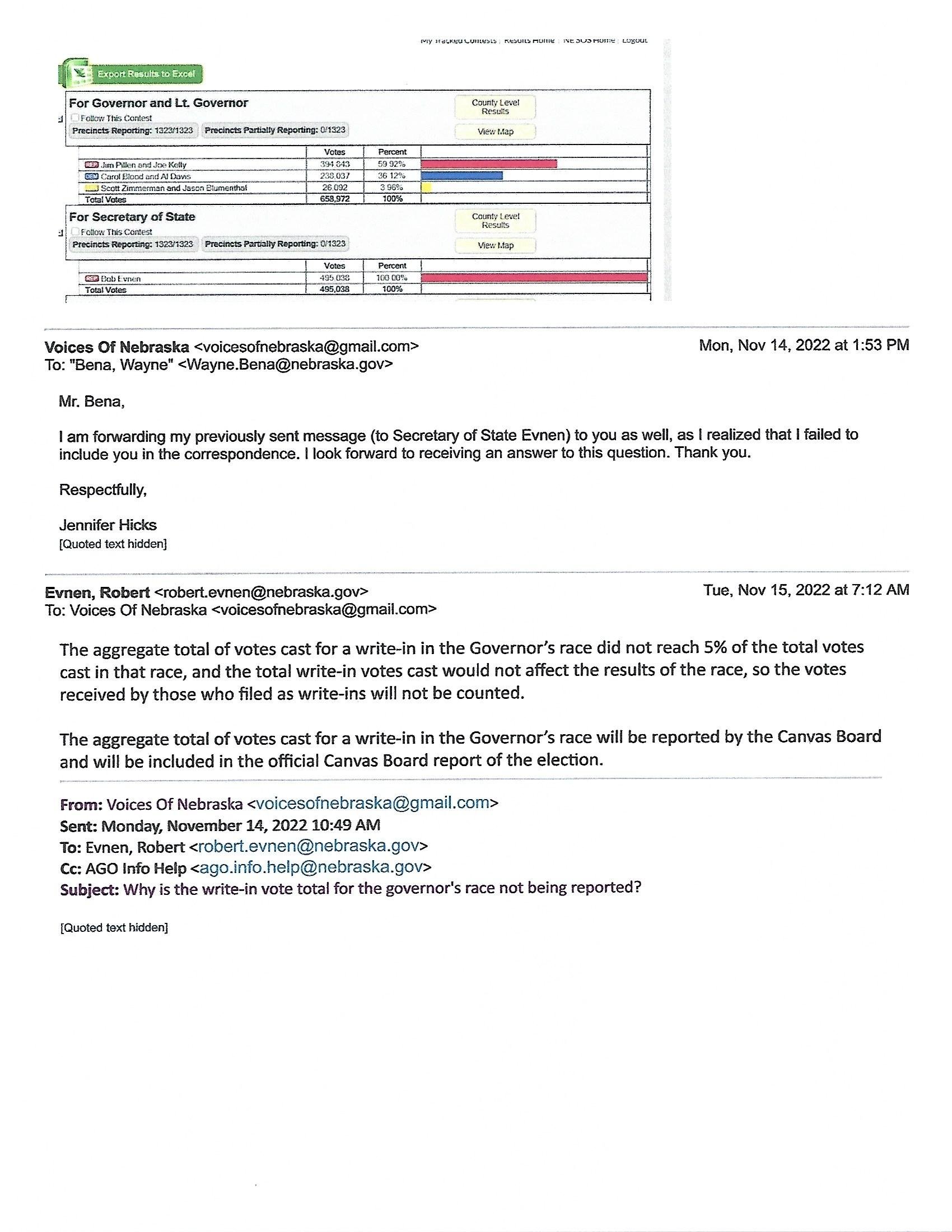 Does Secretary of State Evnen not know that the write-in votes for governor MUST be counted?
The watchfulness of the citizen is the salvation of the state. (We have to start being honest with ourselves.)
Why do conservatives keep doing this?
What in the ever-loving hell is this, NEGOP?
What did you think was gonna happen? (This was all too predictable.)
My meeting with candidate for attorney general Senator Hilgers to discuss election integrity concerns
Comments