Good grief. The fix was already in. 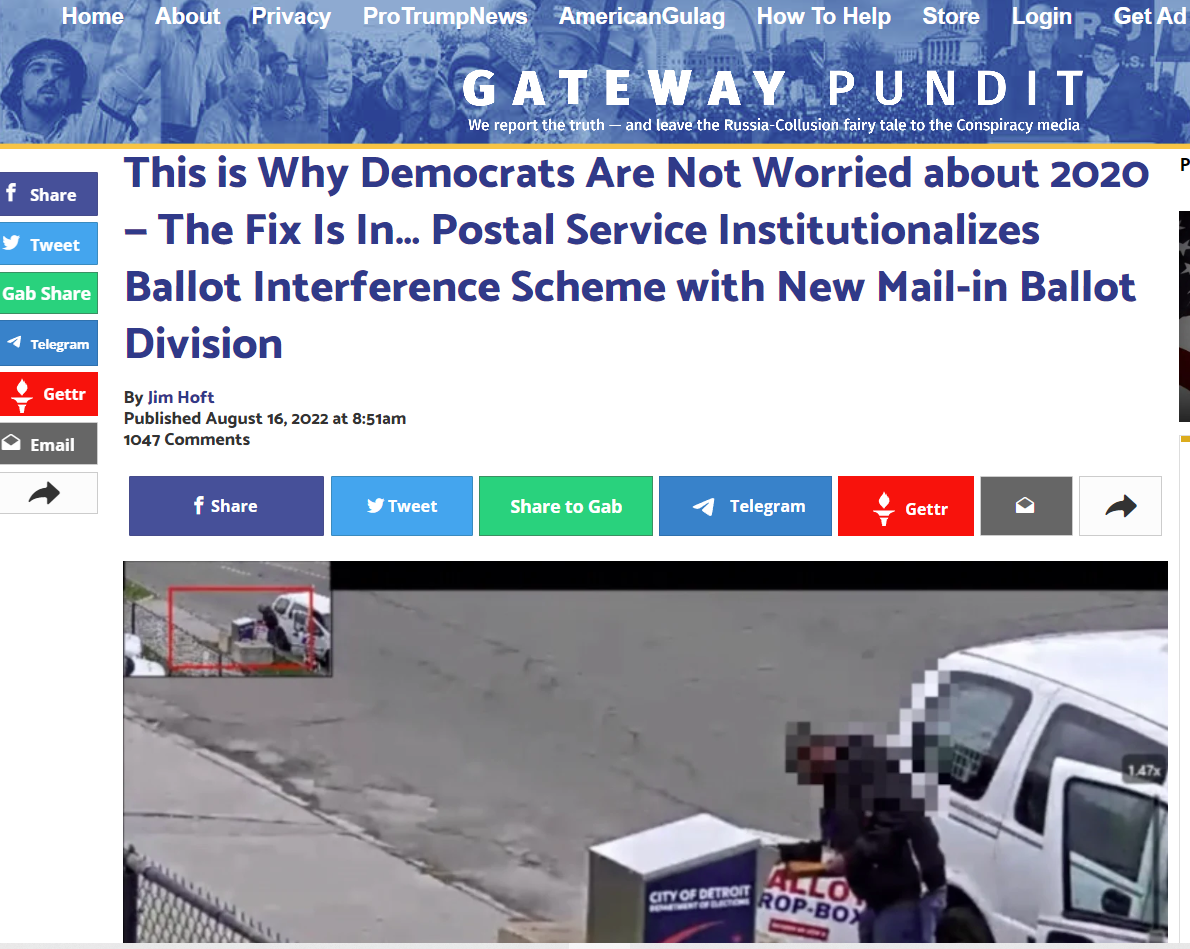 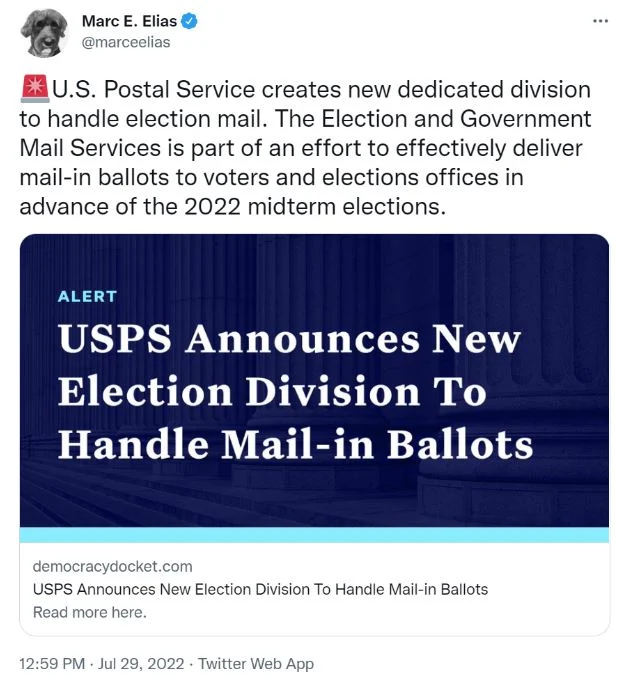 I assume the Gateway Pundit headline might have meant 2022 instead of 2020--but I have no doubt that either way, the Democrats are indeed not worried about the outcome of elections. Why should they? Even when they were in the minority, they still wielded plenty of power. And most of our elected Republicans don't seemed worried either. If they were truly concerned, they'd have never surrendered our country to the theft in the first place, and they would have done whatever was necessary to ensure that the primary elections were secured. Here we are, past the primaries and approaching the general election, and our elections still have not been secured. Most didn't even concern themselves with election integrity until it became a convenient way to fundraise as the general elections draw near.

As a nation, we have become too damn stupid to do the most common sense things.

We have failed to go after the true problem with our elections--which is that the fraud was internal. It wasn't an outside job. We are not pointing the finger where people's attention needs to be directed. Democrats in government are only part of the equation. Republicans in government bear responsibility as well, if for no other reason than for their silence. I think that if more people at the forefront of the fight for election integrity truly understood the battlefield, they'd have  pointed people's attention to the true threat and spent a hell of a lot more time talking about the true story of the events of January 6, 2021. They'd have realized how imperative it is to call upon the people to speak up (and not be cowed into silence), because our "representatives" in government damn sure aren't speaking on our behalf.

The names of groups who signed on to this joint statement declaring the November 2020 elections to have been the most secure in American history are STILL at the helm. They are "practicing" how to screw us over again RIGHT NOW. (And, yes, the USPS participates in the trainings referenced below.) At this very moment people are being trained on how to conduct our upcoming general elections. Probably a lot of them (perhaps most) are good people. But it is the people who told us we must trust the November 2020 election (and must not question any future elections) who are leading the training.

Look, unless and until those who have told us that the November 2020 election was the most secure in American history actually admit that it WASN'T, then we know for a fact that we can't trust them. 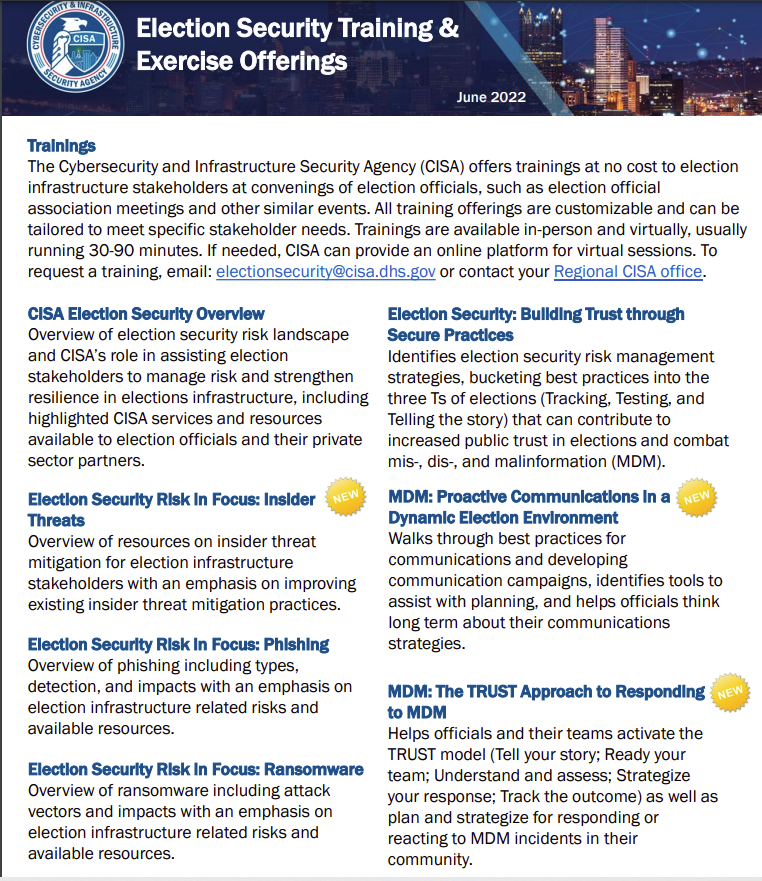 Here's the link, to that document.

Note that they boast more than once that these services are "free" and "at no cost." Mmmhmm. They are not only screwing us, but they are robbing us as well.

Here is who participated in LAST year's annual exercise.

Oh, and here's a gem from the annual exercise preceding the November 2020 election. 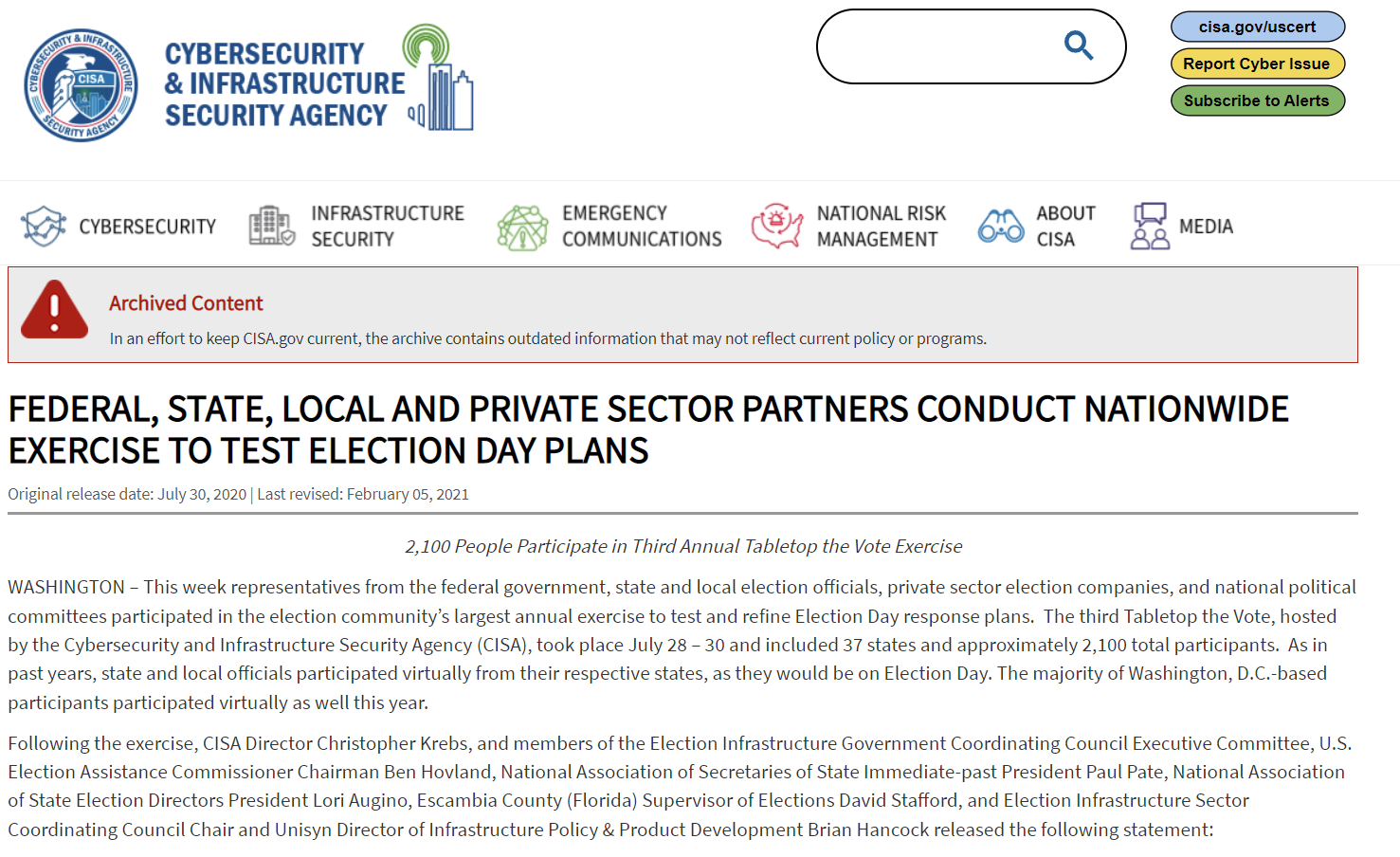 “Tabletop the Vote is just one example of the steps we’ve taken collectively to make the 2020 elections more secure and resilient. Numerous state or regional exercises have also taken place. Every state’s election infrastructure is protected by an intrusion detection system, known as an Albert sensor, and all 50 states and more than 2,500 local jurisdictions receive real-time threat information. Hundreds of assessments have been conducted by public and private sector security experts. And this year, more than 90 percent of voters will cast their ballots with an auditable, paper record.“

The American people have a role to play too. Election Day may look different than you’ve seen in the past, and with more Americans voting absentee, it will take longer to tabulate and report complete results. We recognize that change can lead to confusion, and adversaries may seek to exploit that confusion to spread doubt in the process or disinformation. These efforts can only be successful if we let them, which is why it’s important to be patient and remember that your state and local officials are the best sources for trusted and accurate information about voting, Election Day procedures, and official results.“

As for Nebraska, we will not have our elections secured until people stand up to the REPUBLICANS who could have done something and who (for one reason or another) chose not to. Governor Ricketts refuses to get rid of the machines. His reasons for keeping them are 1) they don't connect to the internet, and 2) we couldn't count the ballots in time if we didn't use the machines. There is no elected official in the state who will provide me with an answer to the question of how it is that the machines used in our elections that have no connectivity capabilities can use Albert sensors which work remotely to transmit information to Amazon Cloud Services outside of our state. (If anyone reading this can answer that, please comment. Our elected officials do not know or will not say.) And Ricketts gives himself away when he says that the reason to keep the machines is for convenience rather than for security. (He may think the machines are more efficient, but if the elected process that uses them isn't a secure one, then it is not.)

With regard to mail-in ballots being used in Nebraska, I believe we have Secretary of State Evnen on the record claiming that we will likely continue using mail-in ballots because he says that people liked having that option. I remember thinking when I heard him say it that it was wrong for him to prioritize ease and convenience over security. But I don't believe Evnen ever had any intention of securing our elections, so...

And the Unicameral, despite Dr. Frank having said that our legislature is one of the better ones he has worked with (how tragic!), isn't going to do a damn thing to secure our elections. They have made it abundantly clear that election integrity is NOT a priority for them. They allowed crooked Secretary of State Bob Evnen to lead them around by the nose and tell them which bills to propose to secure our elections. They were all garbage and meaningless. It was all for show.

I feel like our nation is in a box that we have become too stupid to find our way out of.

Governor Ricketts and Senators Clements and Linehan on election integrity concerns
So sue me! (Ricketts on keeping the ES&S machines)
We have become spectators and consumers rather than participants and producers
Would Pillen be as friendly with CCP foreign influence agencies as Ricketts has been?
Now that Senator Slama has graduated from law school, will she finally represent her constituents?
REPUBLICANS should have been a firewall between us and tyrants. (They are useful idiots instead.)
Why the hell hasn't this collusion between Big Government and Big Tech been front and center in the pursuit of election integrity?
Red Wave?
Comments