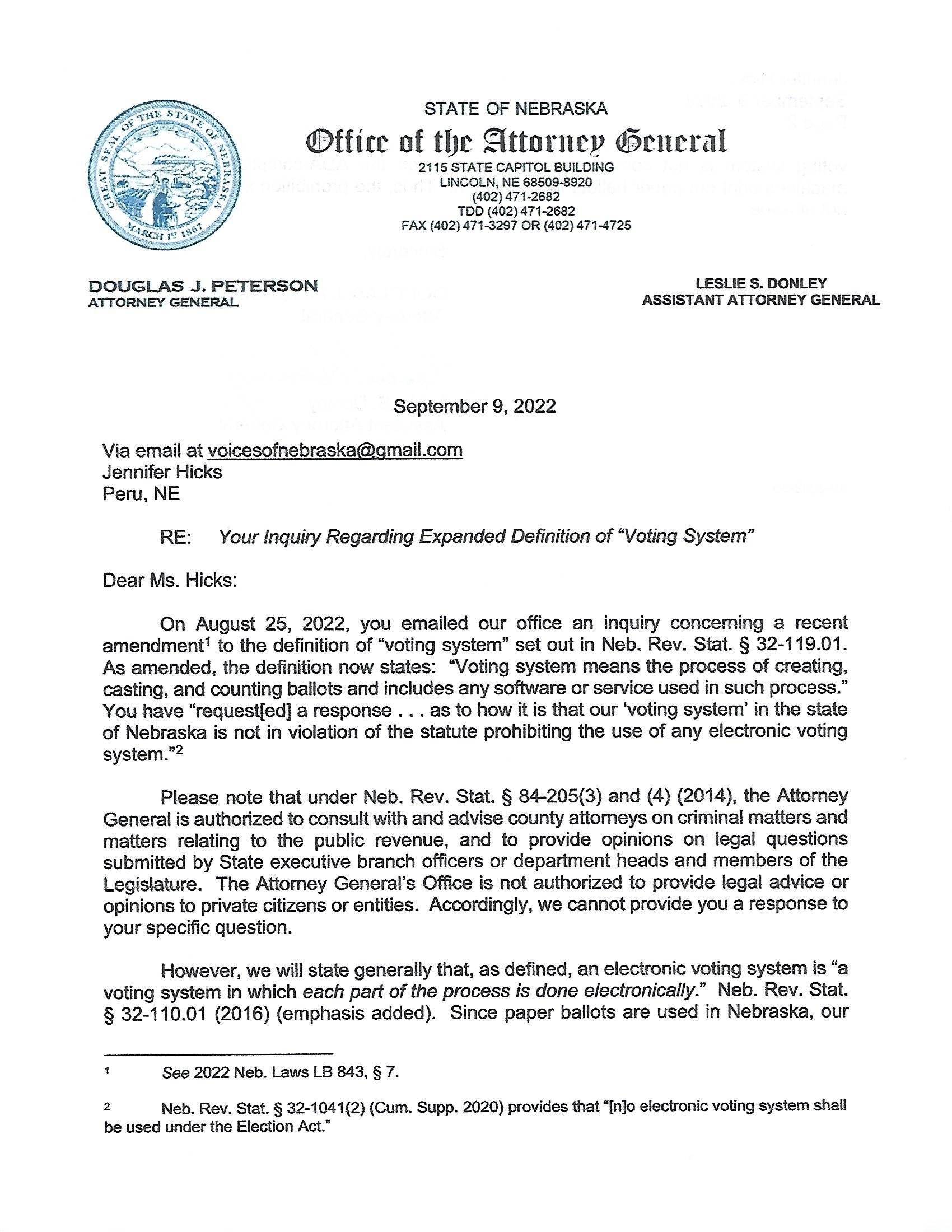 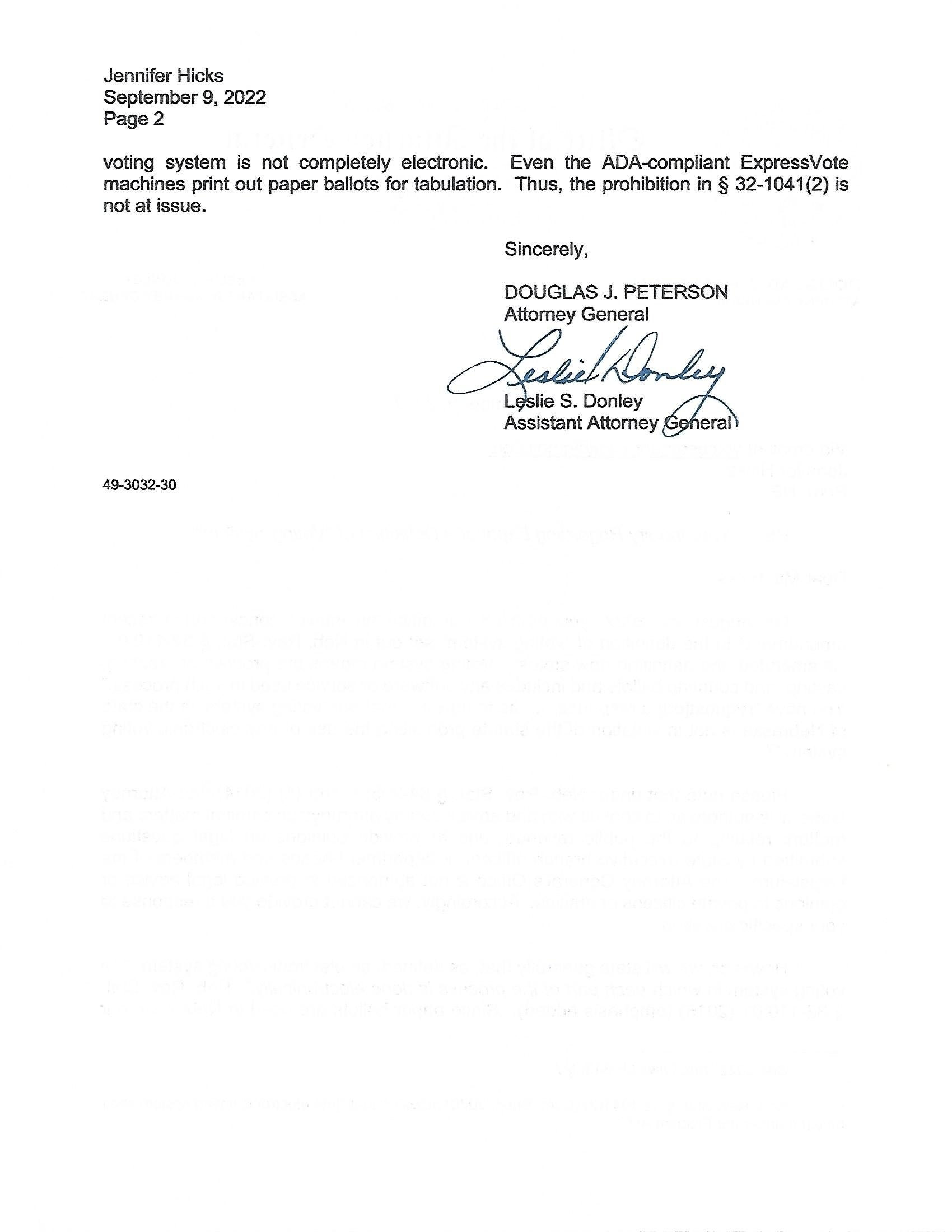 Here's a quick rundown of the latest responses from elected officials in Nebraska regarding the recent change by our legislature to how "voting system" is defined in our state. Make no mistake, your government does NOT respect you. The concerns which I have raised are (I believe) valid ones. They are certainly ones that should be simple to get answered, IF our government believes that what they are doing is in our best interest and for the sake of protecting our rights. But their outright refusal to give a direct answer points to a cover up of either corruption or incompetence. It could truly be either one. I don't know. But what I do know is that a REPUBLICAN-led effort to change how "voting system" is defined in our state has moved us further away from restoring election integrity--and it was done by those in our state who know damn well that they were ignoring the concerns of the people when they did this.

Here's the latest that was learned from my correspondence with them.

AG Peterson's office:  Did you know that the ONLY reason that the attorney general's office has given for why the newly revised definition of "voting system" does not conflict with the previously existing statute prohibiting the use of an "electronic voting system" is that "since paper ballots are used in Nebraska, our voting system is not completely electronic?" The attorney general's office pointed to the use of paper ballots as being the factor which distinguishes our voting system from being an "electronic voting system in which each part of the process is done electronically;" however, as the newly revised definition of "voting system" now includes "any software or service" used in the process of "creating, casting, and counting" of ballots, how can such a distinction be made?

That is the question which no one is willing to answer.

The revised definition of "voting system" now explicitly makes it permissible for "any software or service" (ANY!) to be used in the process of creating, casting, and counting of ballots. The use of paper ballots can no longer be considered separate and apart from the electronic use of software, for the language of the statute makes no distinction. It intertwines and overlaps the two. This is why I have concerns that the change in how our voting system is defined now DOES allow for "each part of the process" to be touched by the use of software/electronics, which would put it in contradiction to the statute prohibiting the use of an electronic voting system.

Secretary of State Evnen's office: The response from SoS Evnen has been interesting as well. We have been repeatedly told by him and by all of our elected officials who parrot him that the machines used in our elections do not connect to the internet; however, we know that Nebraska has been the leader in the nation regarding the use of Albert sensors, which do allow remote access to our voting system. Evnen's answer is that "Albert sensors are not part of our system of casting ballots, counting ballots, or reporting election results." So, hey, don't worry, right? "They are used as part of our voter registration system," he says. Anyone who has been paying attention knows that allowing our voter registration system to be open to remote access makes it vulnerable. It's a "sleight of hand" type of response from Evnen to suggest that our elections are free from such vulnerabilities and potential corruption.

My response back to Evnen, to which I have not yet received a response, is this: If our machines were ordered specifically NOT to connect to the internet (as Evnen has claimed), then why is he permitting our voter registration to have such connectivity?

So it is likely that the amendment proposed by Senator Flood which led to the change in how our voting system is defined was done at the suggestion of Secretary of State Evnen. What this change in the definition of "voting system" has done is it has put more power in the hands of the Secretary of State. What this results in is LESS oversight from "we the people," for I have reported recorded audio of Governor Ricketts and others like Senator Linehan telling us that we should simply trust the Secretary of State whom we elected (or did we?) to provide all oversight of our elections for us. That is the answer from the federal government as well, by the way. Their advice is that if you have questions about how your elections are being conducted, then you should just rely upon the answers from the "trusted voices" of those who conduct our elections--because they are the experts. Experts. Hmmph.

What could possibly go wrong when we permit those who stand to gain the most to be the sole providers of oversight? (Secretary of State Evnen's own name was on the ballot in the primary, and he did not run unopposed. The vote was split, but more votes were cast for candidates other than Evnen.) Does it make any sense that we are being told that the only assurances that we need that our elections are conducted fairly should be those coming from someone whose name is on the ballot?

Senator Slama's office:  Ah, if only I had a dollar for every time Senator Slama has said to me, "I'm not a lawyer." As you can see in my exchanges with her, Senator Slama seems not to understand her own role as a representative of the people. She also is avoiding taking any responsibility for the vote which she cast in favor of changing the definition of "voting system" to now include software. Her vote was in opposition to concerns raised to her by MANY of her constituents. When I asked her to answer for why she voted as she did, her response was the equivalent of, "Well, everyone else voted for it." As you can see in my reply back to her, I have informed her that the people of District 1 deserve a better answer than that she followed the lead of her political peers in the Unicameral rather than giving a voice to the concerns expressed to her by her constituents.

I have requested to meet with Senator Slama and also with Secretary of State Bob Evnen. I'll update on that when I know more. 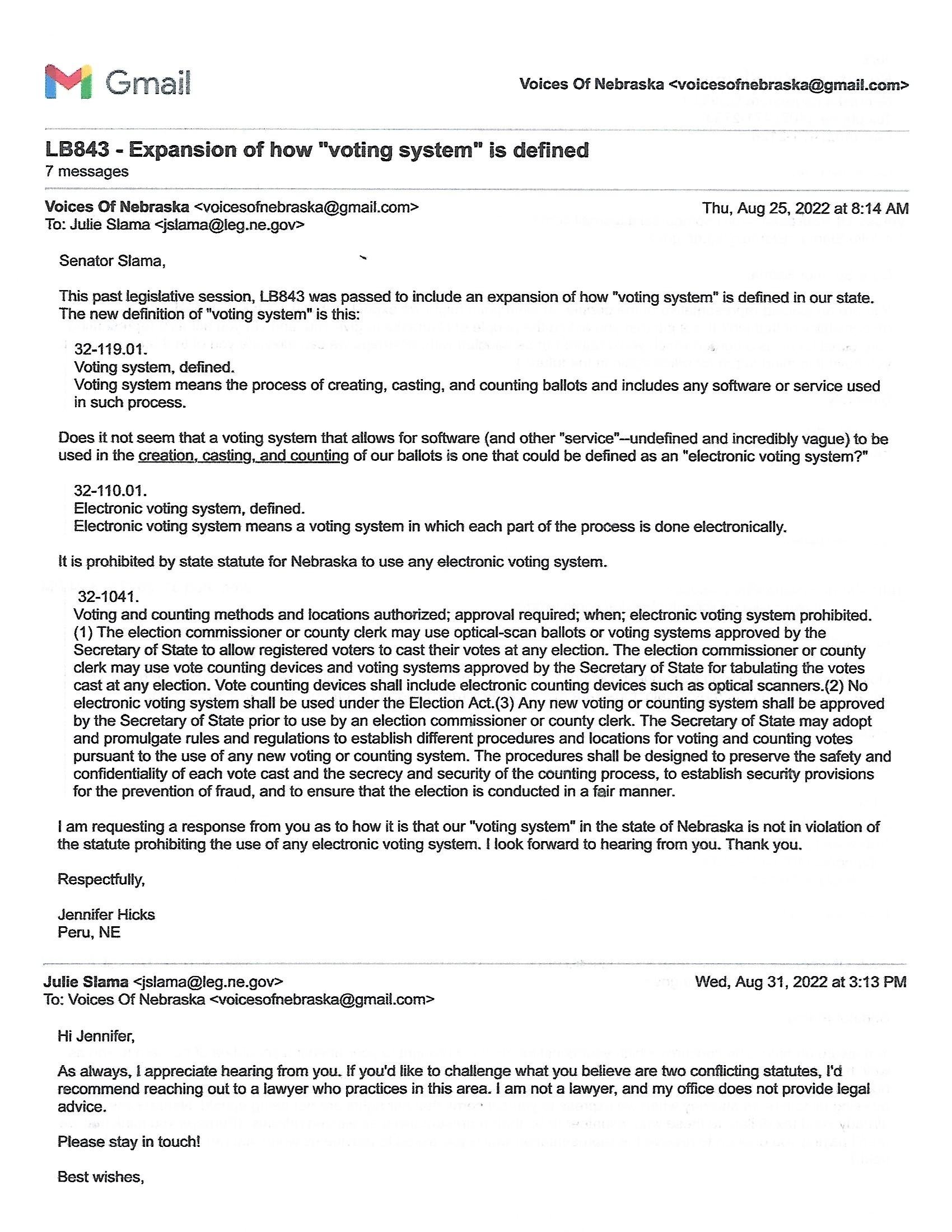 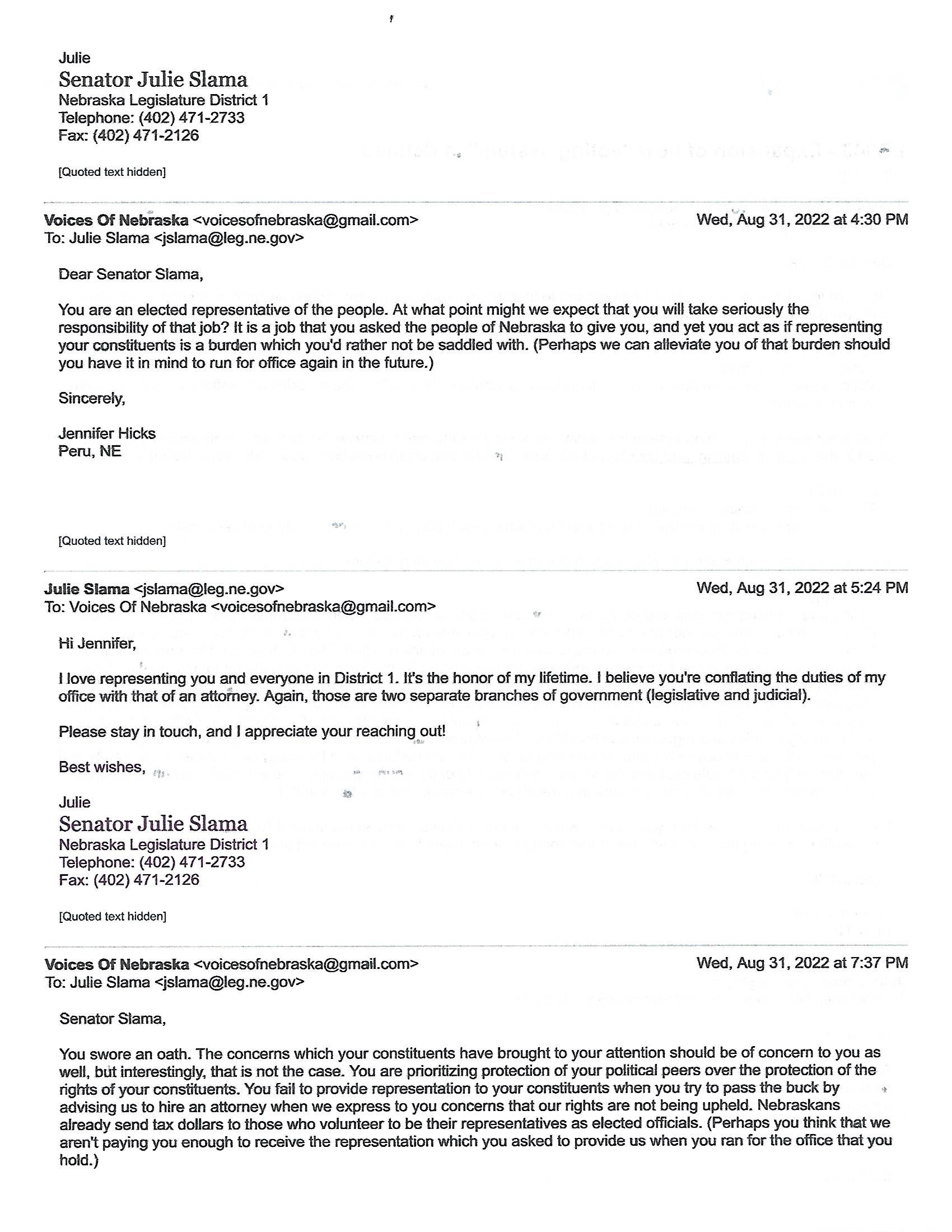 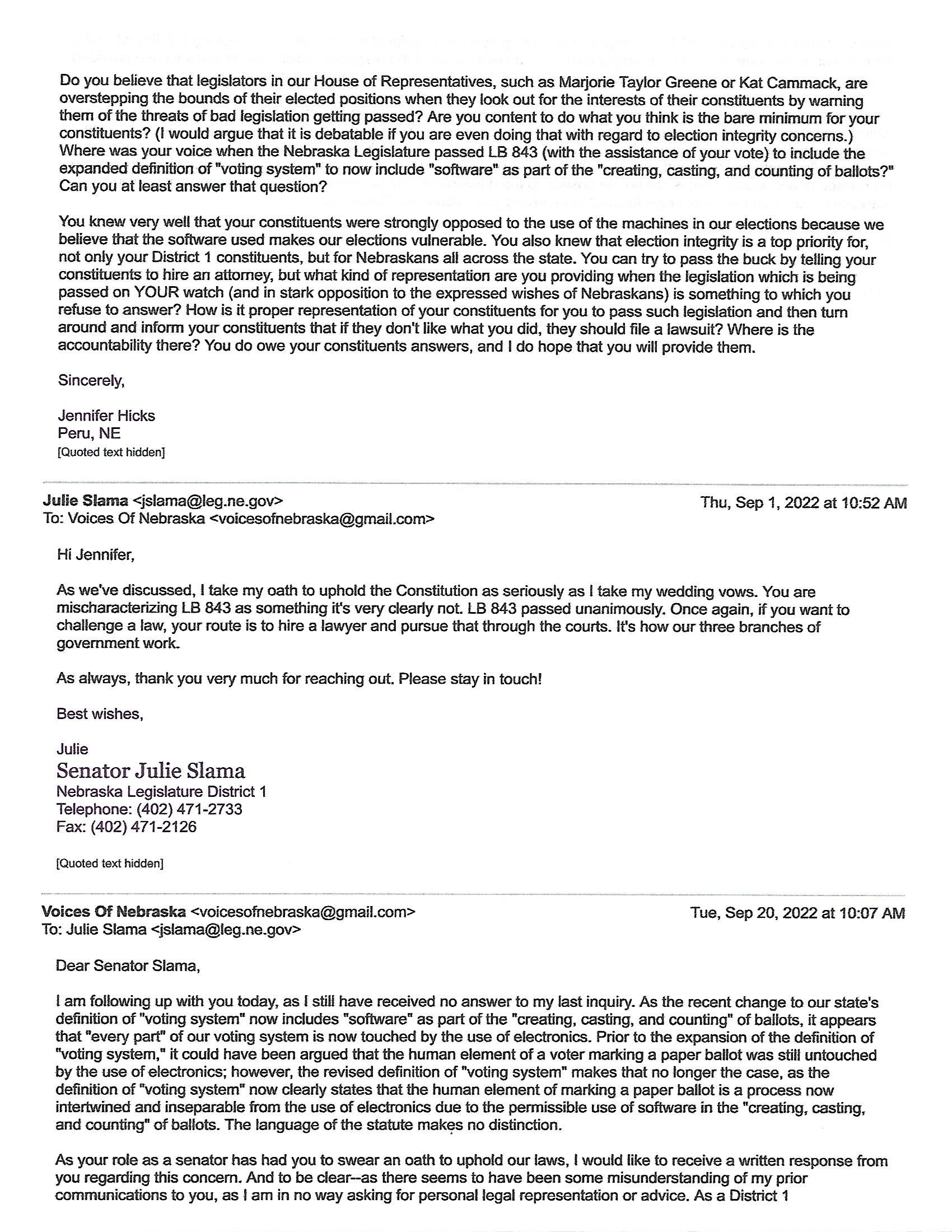 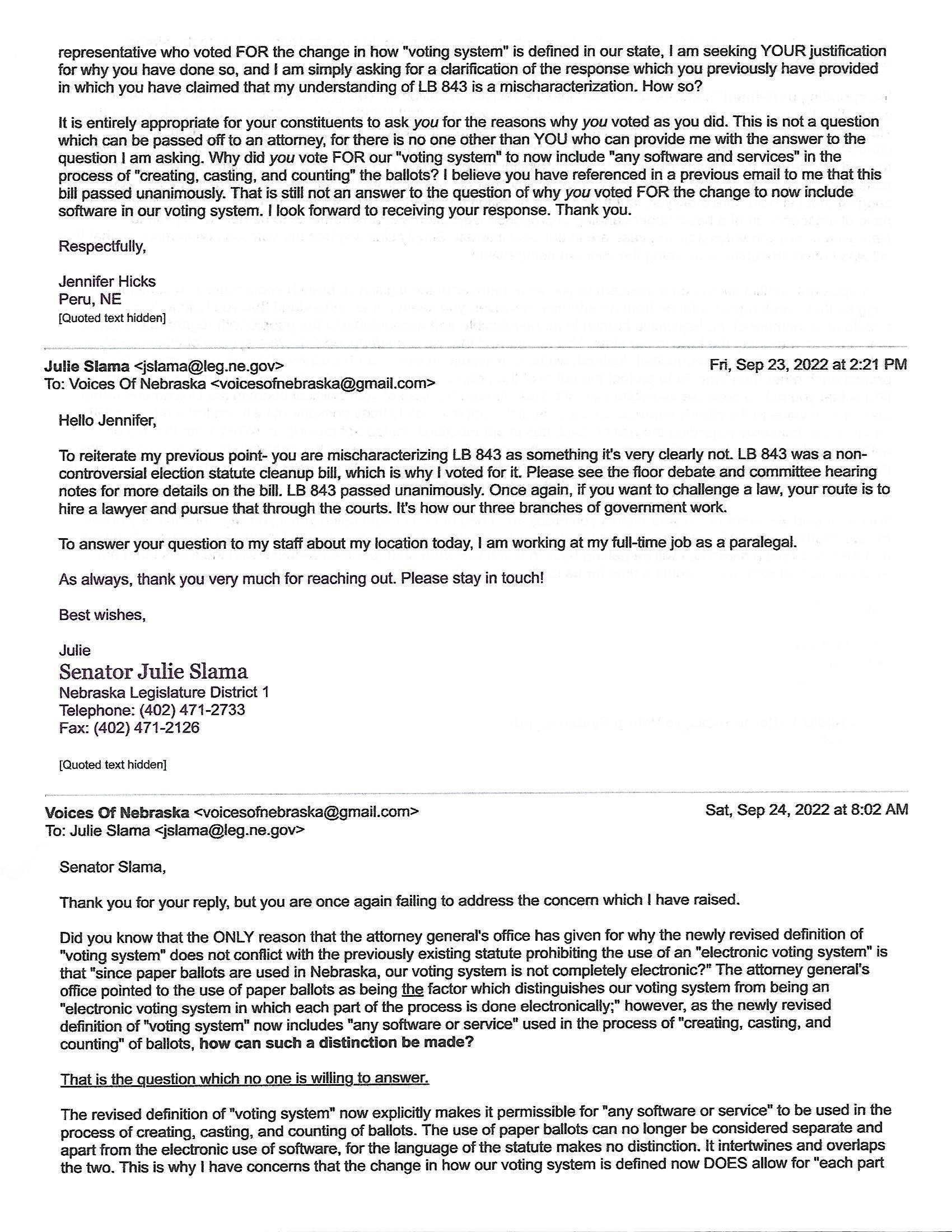 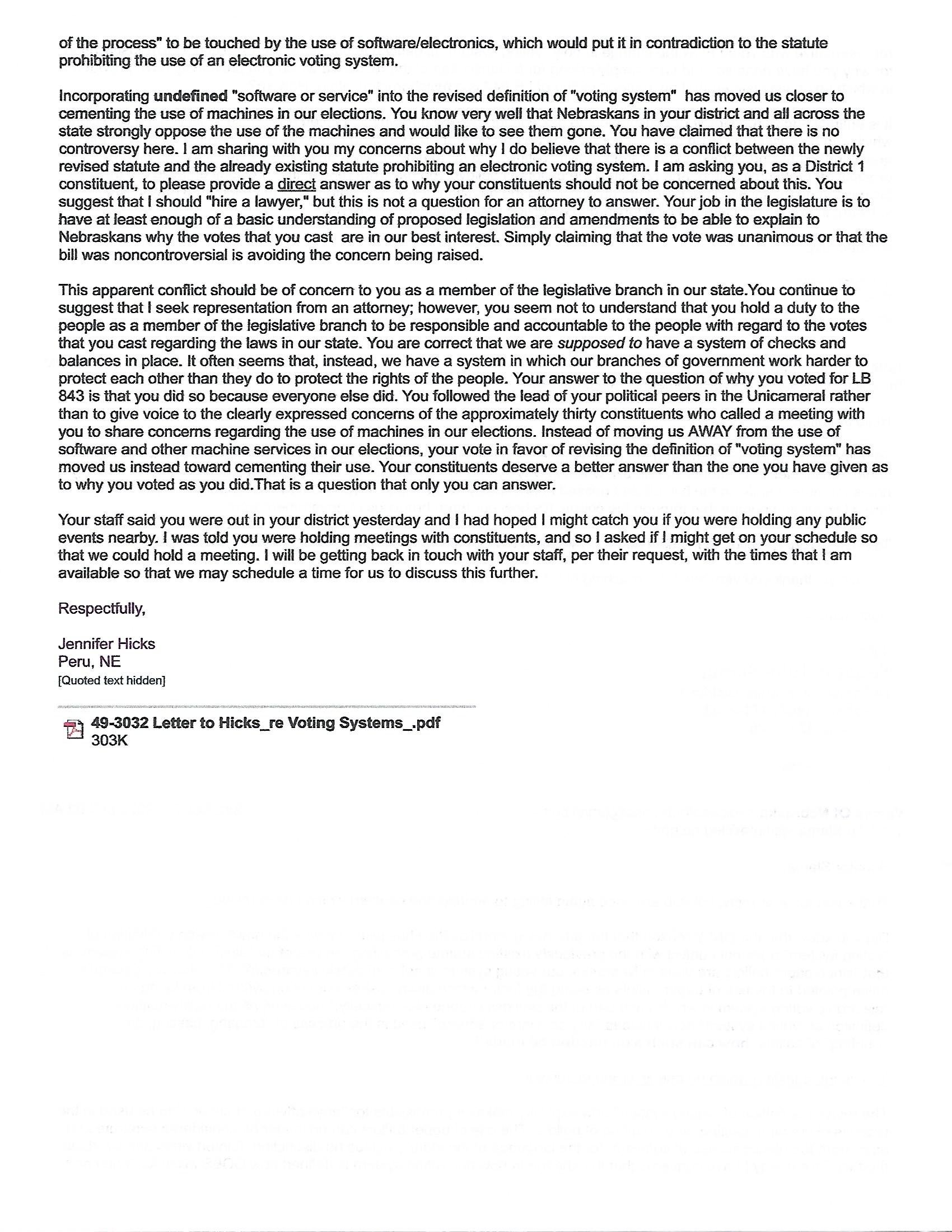 And her response to that call for accountability? This: 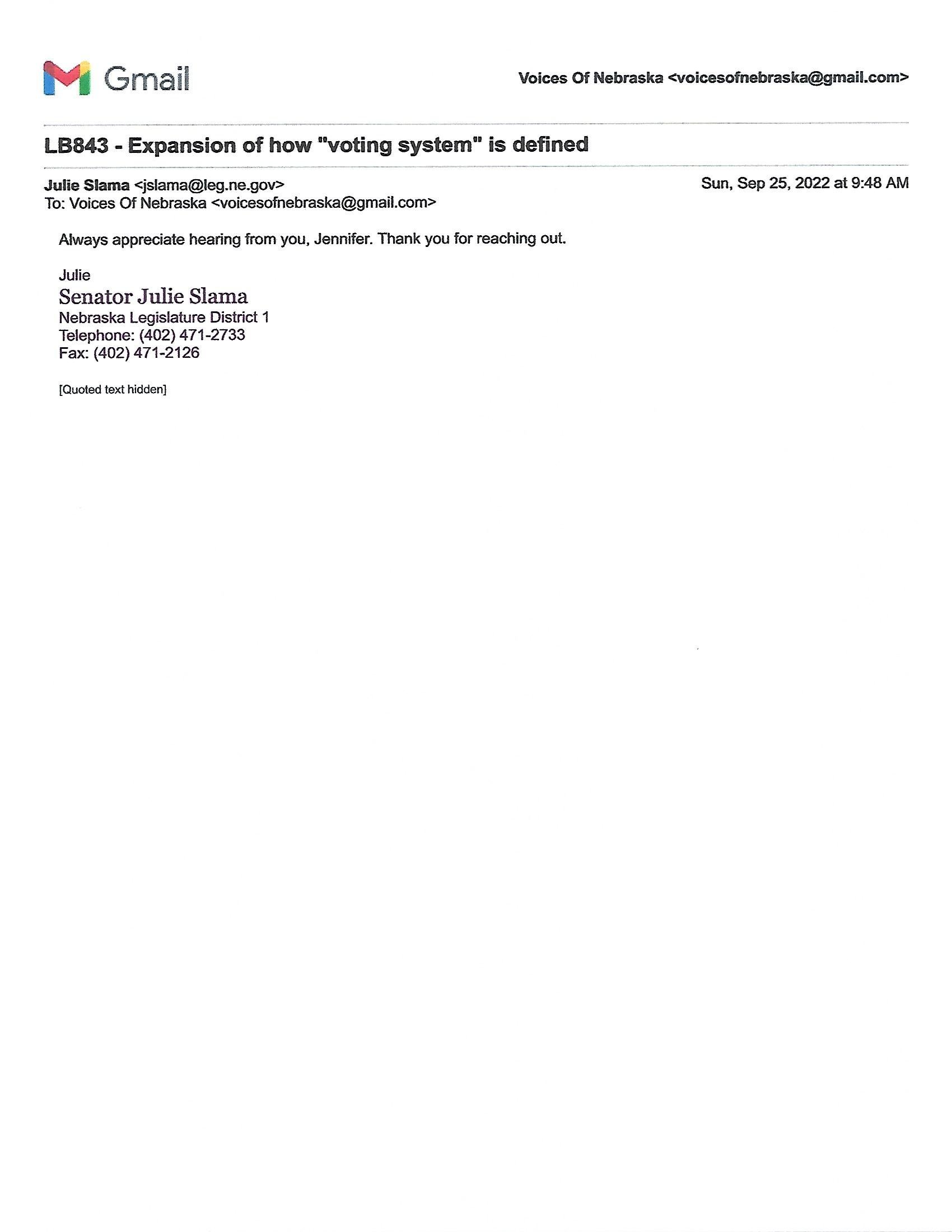 The "Letter to Hicks" being referenced in these emails is the letter from the AG's office. It is the one pictured at the beginning of my article, at the very top. 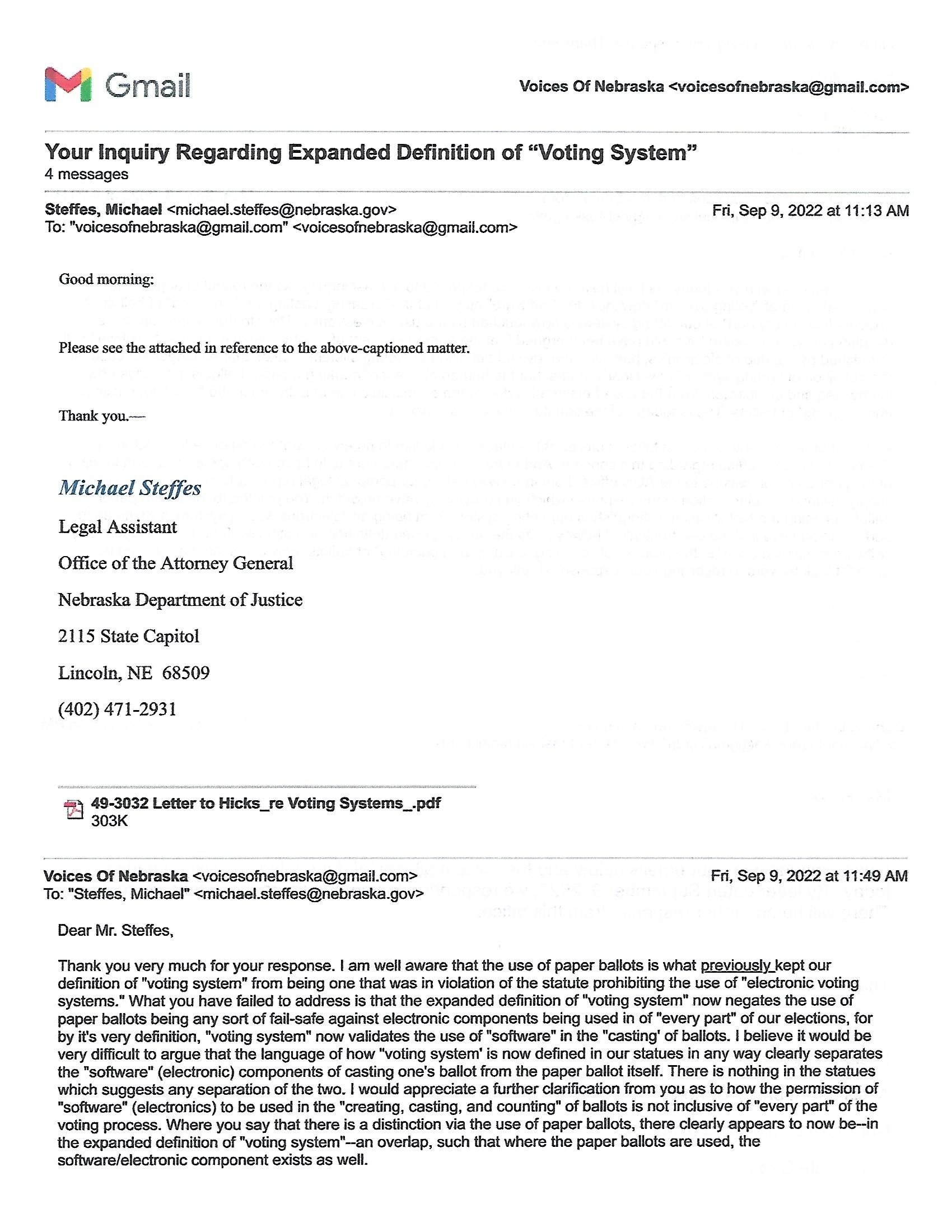 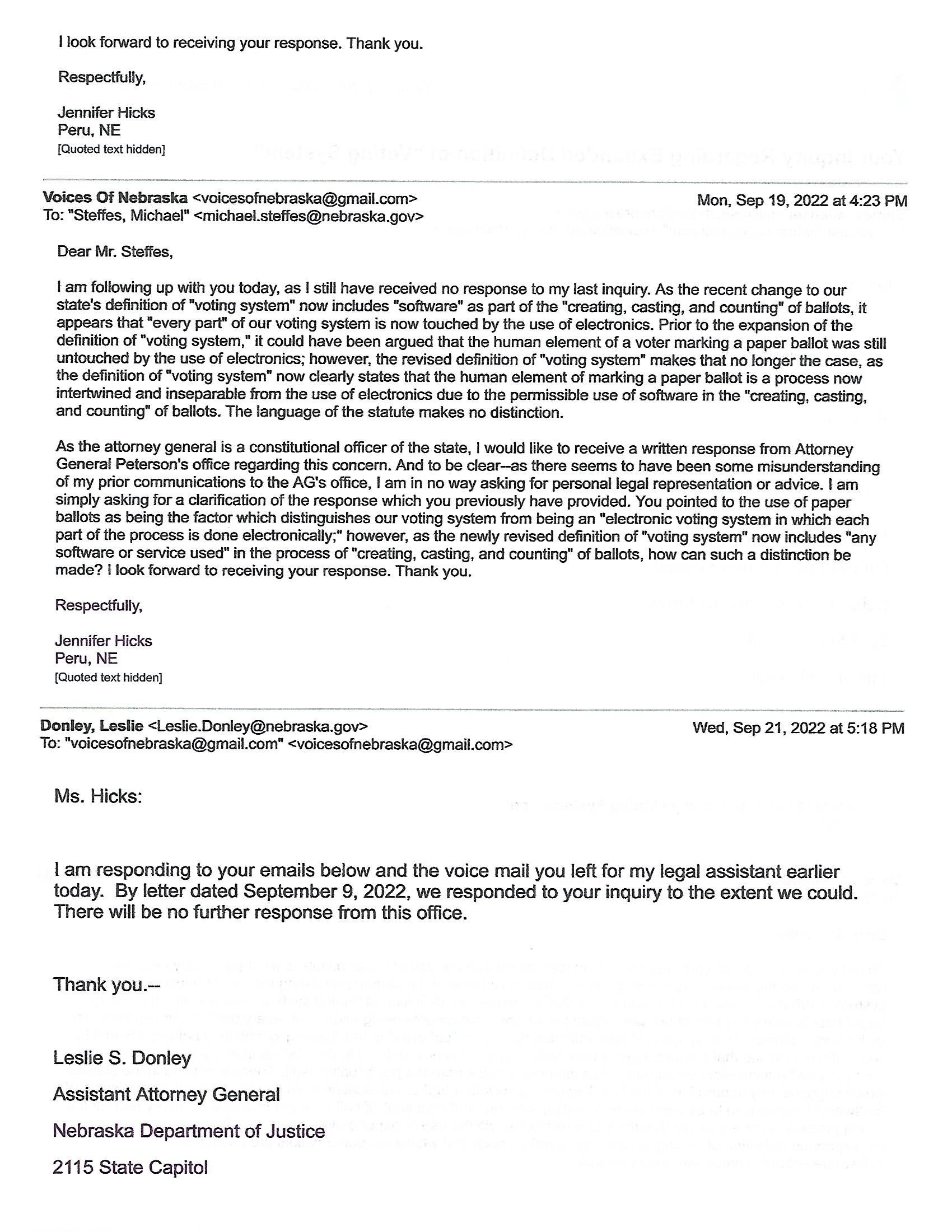 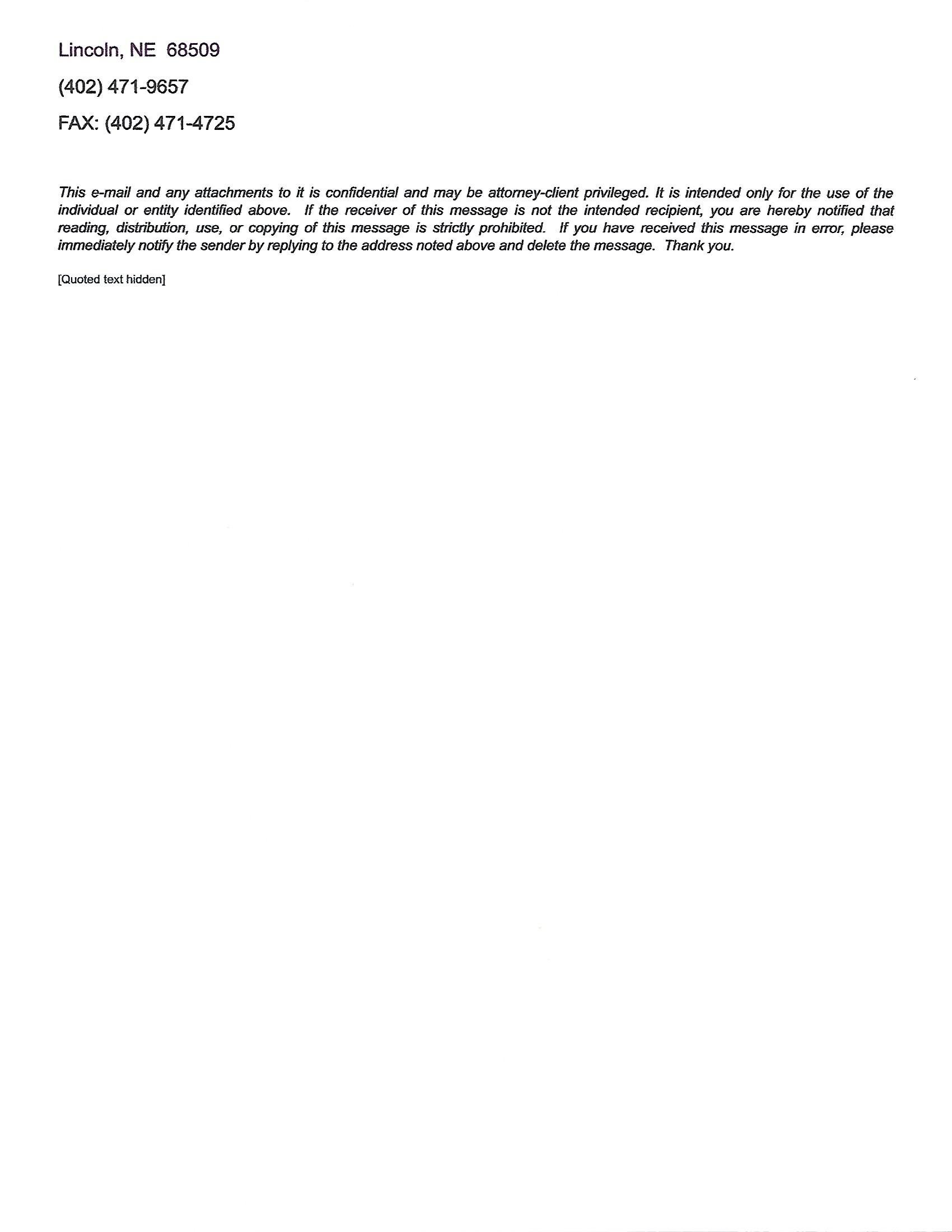 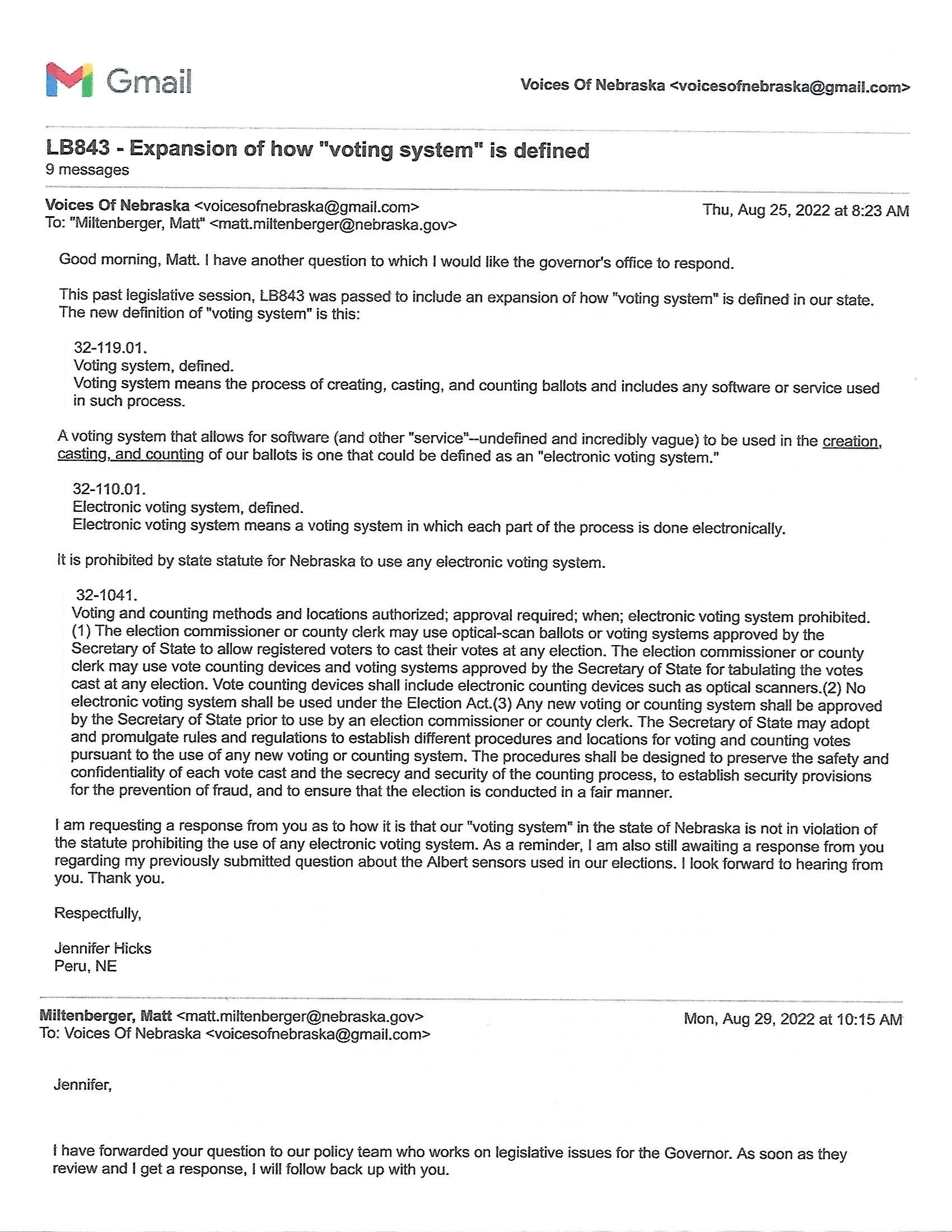 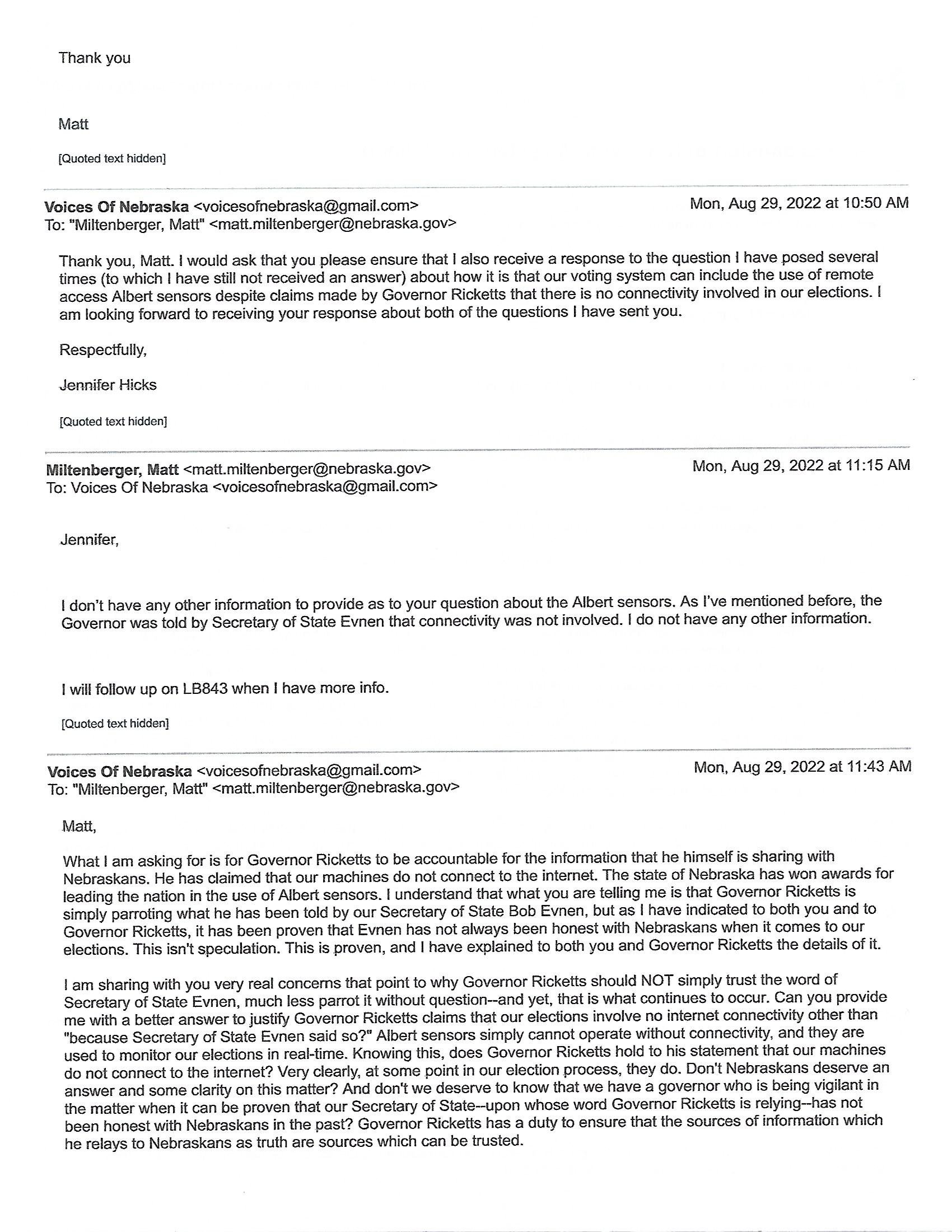 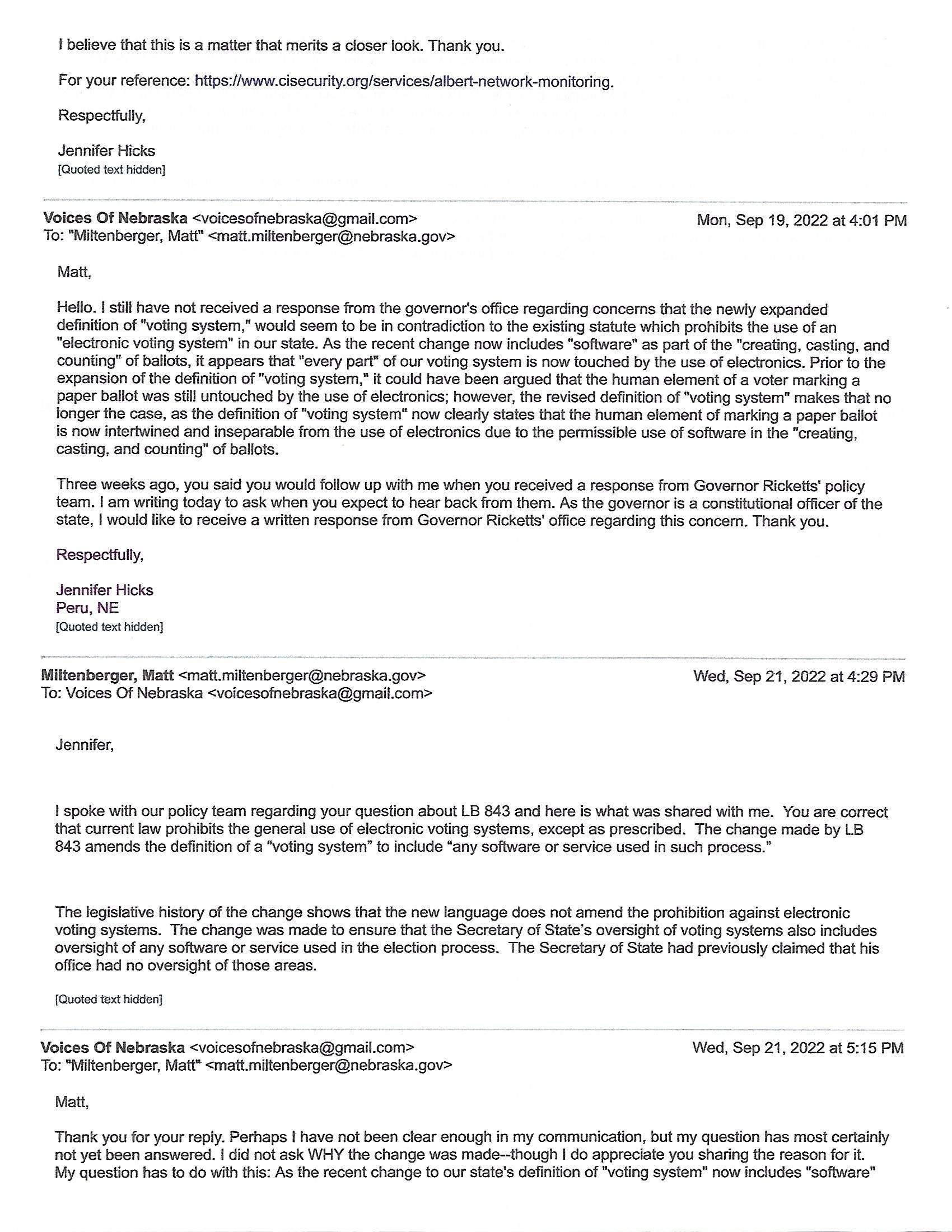 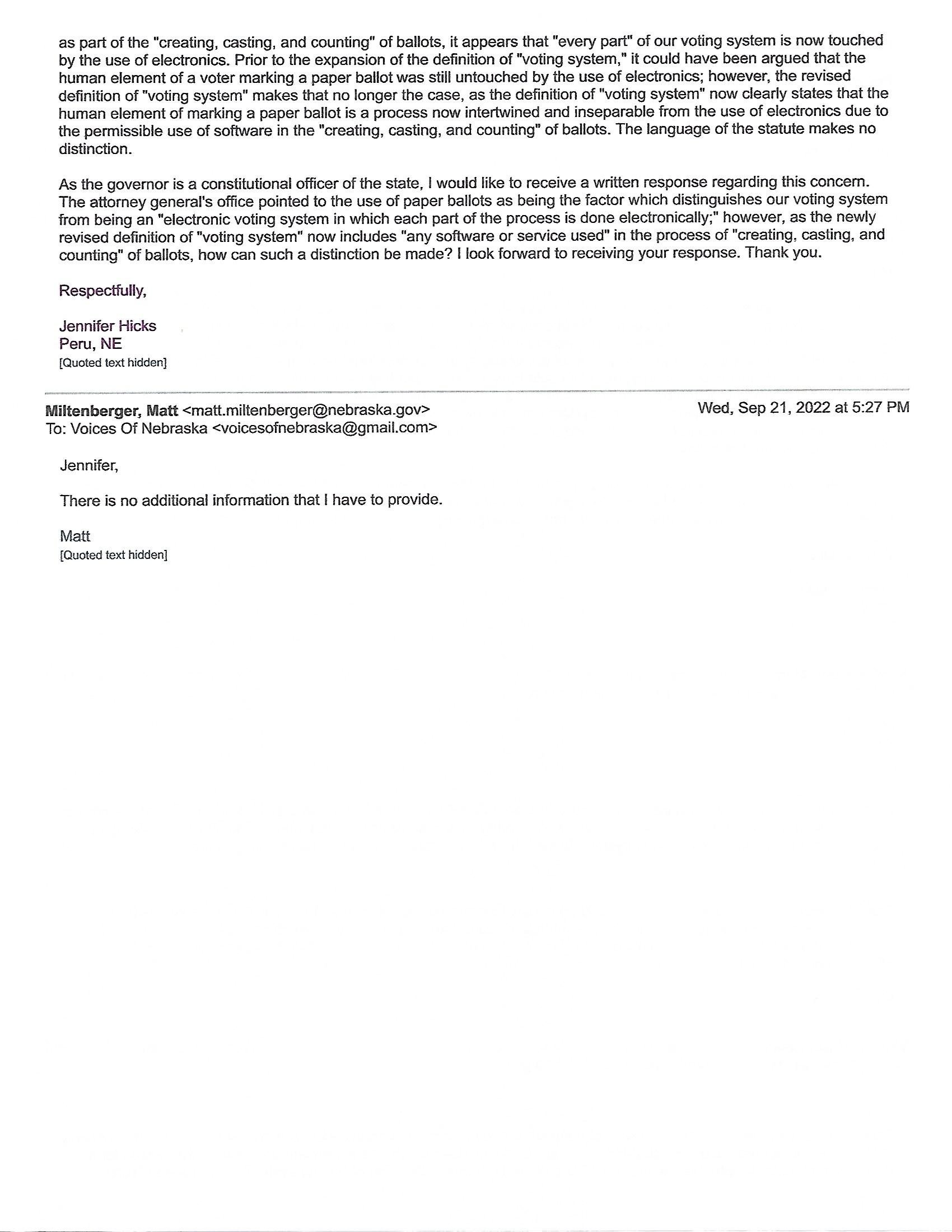 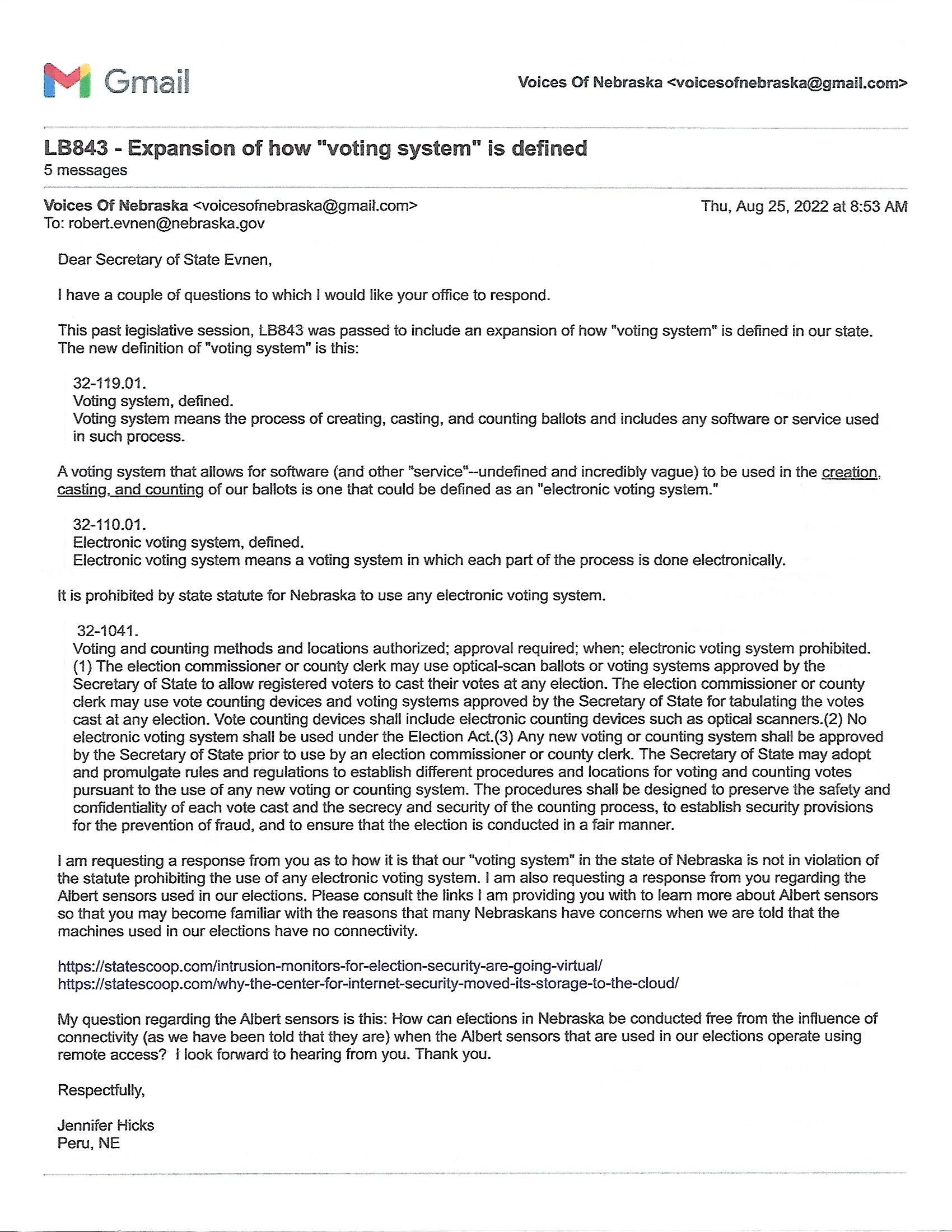 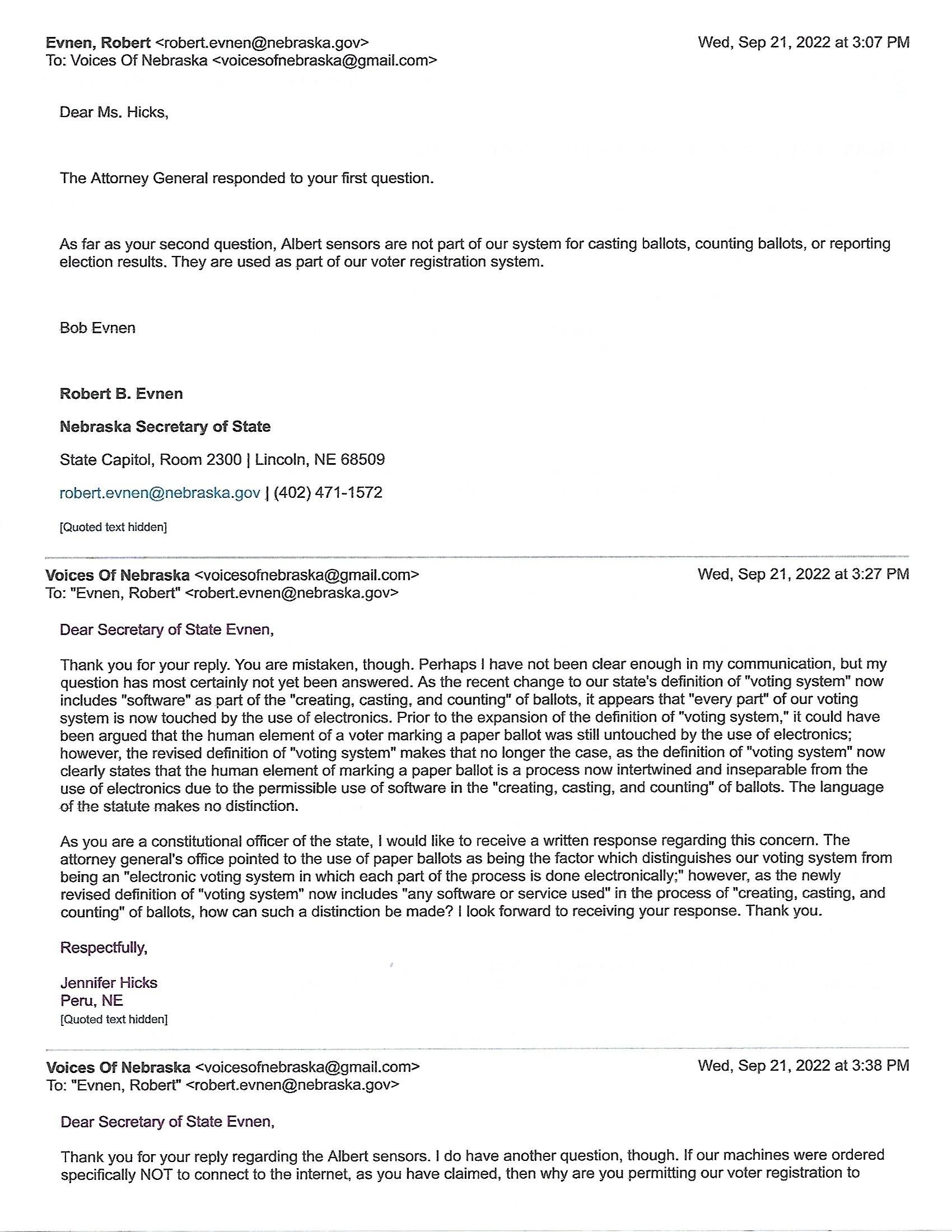 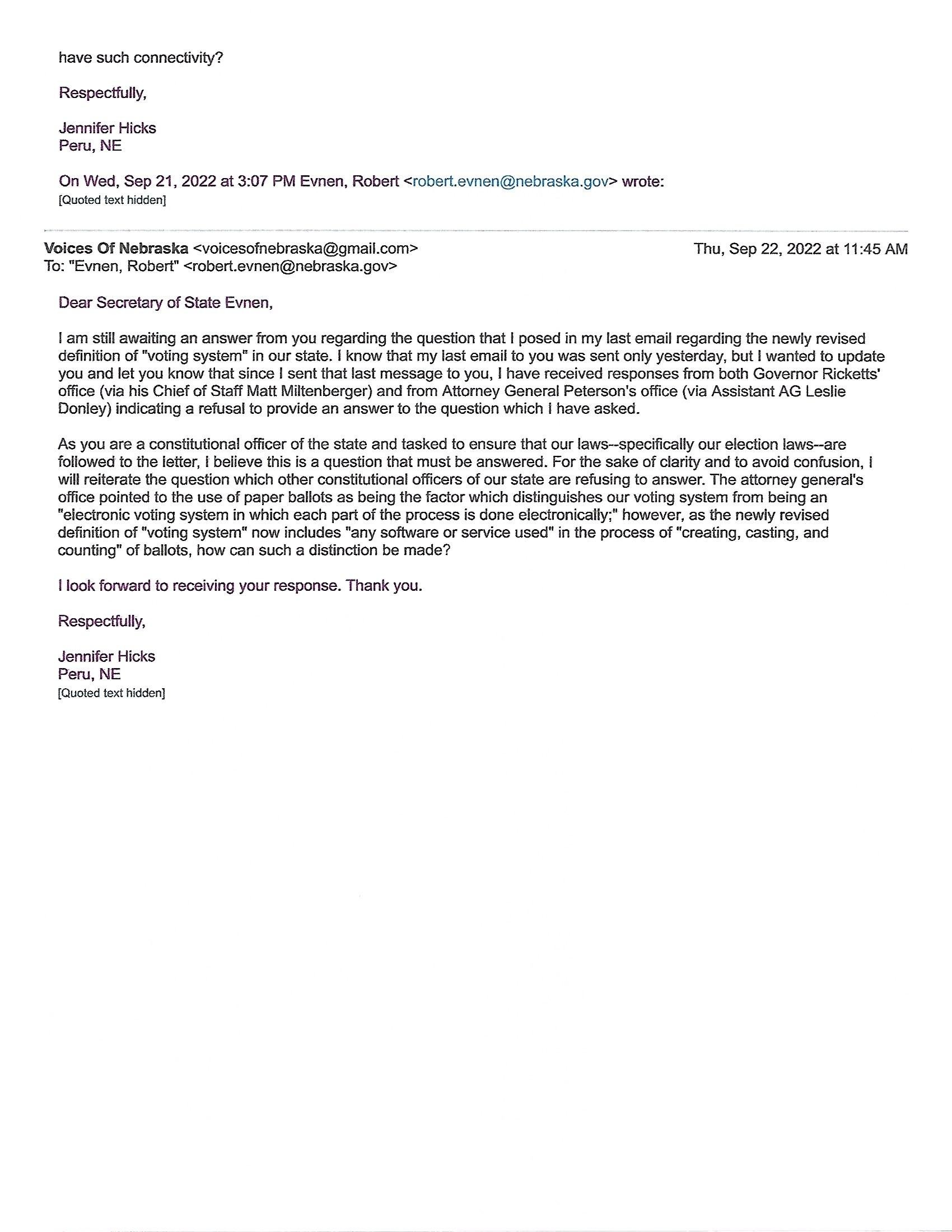