If Trump IS in control--should you want him to be?

Many have gotten to the point where they trust Trump more than they trust themselves. That puts us in a dangerous place of not being able to discern the truth for ourselves. People who think for themselves should be able to see that the information below from the website stopworldcontrol.com is pure propaganda. The most effective propaganda is equal parts truth and lies. It defies reason to think that narratives such as the one below (which is extremely widespread, I'm afraid to say) are anything more than the fiction of those pushing a globalist agenda. 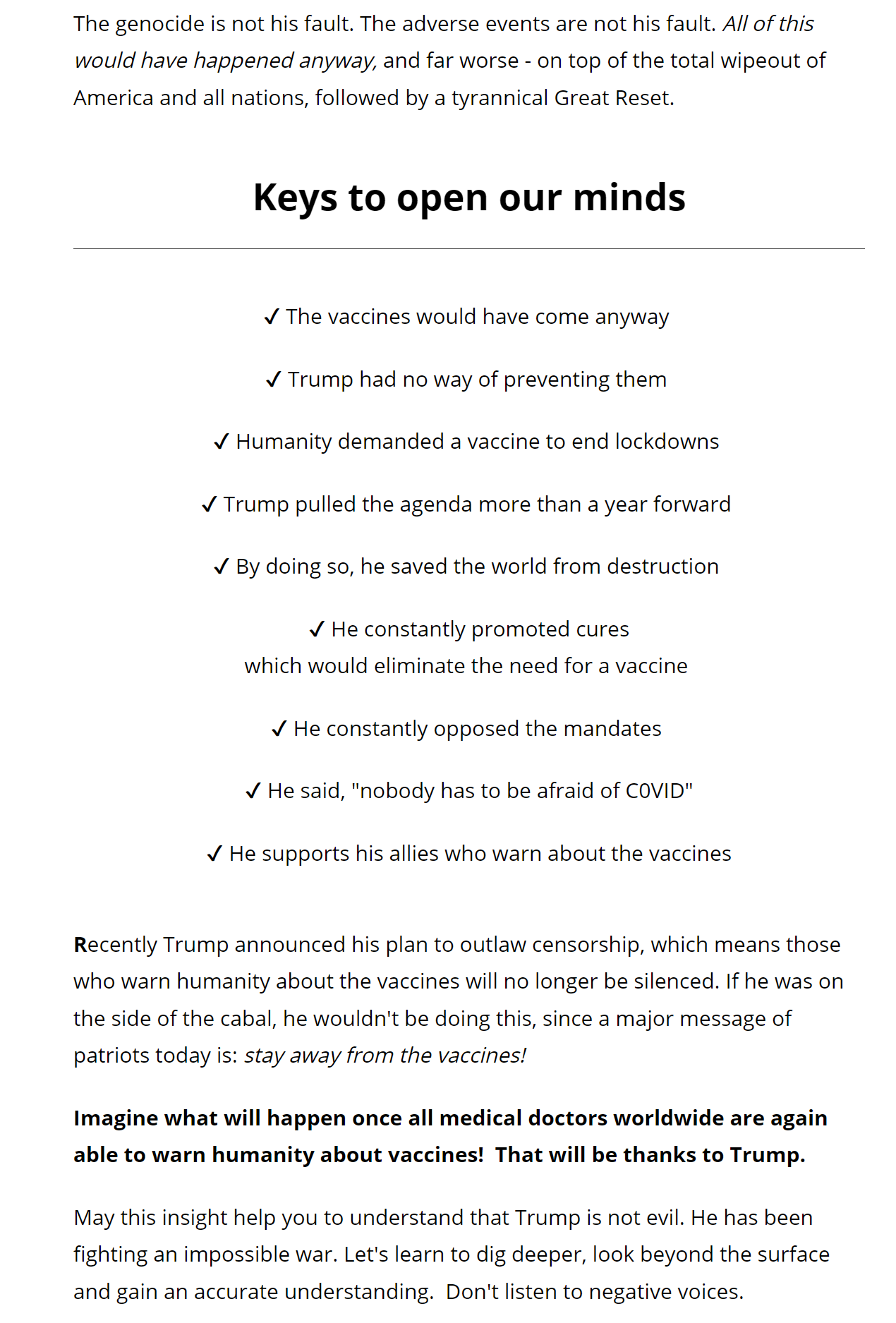 Websites and videos have been widely shared for a long time among hopeful conservatives who believe a narrative which tells us that Trump is in charge. A lot of the fiction repeats what is in the image shared above, and that website is but one of many which has been used to convince people to suspend their disbelief and accept the idea that Trump is in charge of everything right now. There are a multitude of places online where such stories may be found. You can read here where I've commented previously about how these brainwashers are using the exact same tactics used by groomers and abusers to control people:

If those fantastical stories are to be believed, then Trump is not only in control in our own country from the shadows, but he is in control of events on a global scale. As I've often tried to warn people, be careful what it is that you ask for and that you hope to be true.

I'm sure there are some who won't read past this point, if they even made it this far. I have observed for a very long time now that many  conservatives have become what it is that they claim to hate. They've become "snowflakes" who melt at any suggestion that President Trump could ever do any wrong. I've also been disappointed to see that Trump himself eats up the praise and then regurgitates it back to us in his social media posts for us to devour again. I don't claim to know the source of the "Trump was right" propaganda which always manages to explain away any of the times when Trump WASN'T right, but I do know that Trump is just as willing as many of his supporters are to turn a blind eye to any of the times in which "Trump was wrong."

I am not anti-Trump. I am simply seeking the truth, and I know that we are not getting it. I do not deny that Trump has done many things in the past which were right and good for our nation. But a man who is proud enough to accept praise heaped upon him for his successes should also be humble enough to hold himself accountable and to accept criticism for his failures. When I add together Trump's successes and failures, I find that we are in the negative, for all of the good things which Trump delivered to us have been lost--and so quickly--to tyrants. We are not winning, and Trump--if he wishes for many to take him seriously again as a candidate in 2024--must acknowledge his part in how we have gotten to where we are.  He needs to stop sharing on social media messages which elevate him to the position of a superhero or a savior of us all.

He needs to be honest.

The Light of Truth is the only thing which will overcome the Darkness and the Lies. Trump needs to give Americans an honest account of what was driving his leadership decisions throughout the plandemic. How did the clever man who had governed us in the three years prior to COVID-19--the man to whom many had often attributed the skills of a "5-D chess player"--get it so wrong in that final year of his term? Why did someone as intelligent as Trump not know better when he told us that face masks (which have never worked to prevent the spread of viruses--says so on the box!) were "patriotic?" How did such a man not see the masks for the social control measures that they so clearly were being used as? How did someone known for the good sense to fire a bad employee fail to do exactly that when it was most needed? How did a man known to be a counterpuncher and who promised that America would never become a socialist country fail to fight like hell when our country was handed over to tyrants by politicians on both the right and the left.

Trump has allowed people to essentially idolize and worship him. He permits them to believe that he is the only way through which America could ever be made great again. He--and so many of his supporters--have forgotten what it was that truly made America great, though. Our country was founded upon the idea of INDEPENDENCE from government and not a dependency upon one man. Many have outsourced the protection of their freedom to others. I have been guilty of that myself. In the past I wasn't doing my part to provide the proper oversight that I should have of those within our government who had been tasked to act on my behalf. And look where such negligence has gotten us. A true MAGA message from Trump would have been one that resulted in "we the people" reclaiming our proper role in the relationship we have with our government. It is an illusion that Trump's message is one that empowers the people. It isn't. Because the proof is in the pudding, and the truth is that far too many people have become dependent upon Trump to save them--and Trump himself allows people to put their faith in him rather than in themselves. Government of, by and for the people will never be restored by those who buy into fairytale stories that rely upon Trump to save the day.

And what of God? I believe that God will not return to our nation until accountability does, for when we reject accountability, what we are doing is rejecting God. Those who seek God are willing to stand and be judged and to answer for their actions. I discuss that more in depth in the video linked below:

The fairytale narratives that seek to explain away Trump's shortcomings rather than to seek to make him answerable for them are, I believe, rooted in evil. What is truly terrifying is how many people have fallen prey to it.

The narratives are very widespread which purport that you are "in a movie" and that things are "scripted." Free people write their own script, and it is our free will which is the divine reflection of God's image in which we were made. And if the stories that can be found all across social media about Trump WERE to hold any truth to them with regard to claims that "Trump is in charge," then what conservatives who believe such stories are embracing is globalism writ large. Many conservatives have fallen victim to people who are using the very same tactics that groomers and abusers use to control people. And the most disturbing thing about all of that, to me, is that Trump has not spoken out against it. Does he want to be president or does he want to be the king of the world?

Be careful what you hope for
This is how groomers and abusers speak
Accountability, God, and the Importance of a Strong Foundation
Those in government HATE us and will embrace the Devil to avoid accountability
Is Trump still deserving of your support?
Chalk up a win for those who label PATRIOTS as "terrorists"
Comments