Why did our Nebraska Legislature redefine "voting system" in our statutes?

Did you know that this past legislative session, LB843 (it's an annual omnibus elections law bill) was passed to include an expansion of how "voting system" is defined in our state? 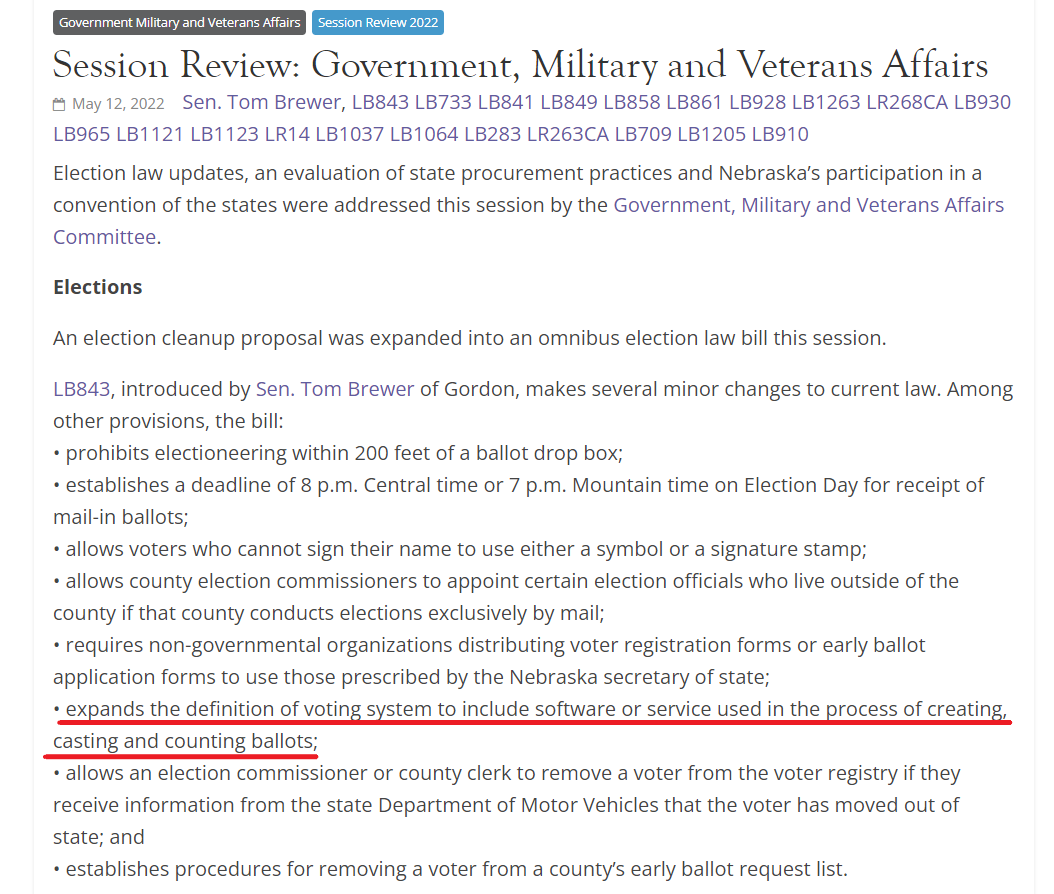 How can it not be a violation of the prohibition of electronic voting when we just expanded the very definition of our "voting system" to literally include software and other rather vague and undefined "service" that may be required to "create, cast, and count" ballots.

And why would they redefine it now anyway? (It sure seems like they are trying to legitimize the ES&S services that voters in our state and all across our nation have been calling into question.)

Does it not seem that a voting system that allows for software (and other "service"--again, undefined and incredibly vague) to be used in the creation, casting, and counting of our ballots is one that could be defined as an "electronic voting system?"

From "creation" to "casting" to "counting," it sure sounds like "software" would encompass "each part" of our voting system. So how can our statues--which prohibit electronic voting systems--now define our voting system to include software and "service" (which, again, isn't defined, but would suggest electronic services in addition to software)?

It's as if this was done to protect the use of ES&S services in our elections. Our elected officials have been made well aware of the concerns that people have regarding the use of ES&S, so what do you think of them slipping this new definition of "voting system" into the omnibus election law bill? As we ask our elected officials to eliminate the use of services like ES&S in our elections, it appears that our legislators are moving us toward them instead.

So sue me! (Ricketts on keeping the ES&S machines)
Why the hell hasn't this collusion between Big Government and Big Tech been front and center in the pursuit of election integrity?
We have become spectators and consumers rather than participants and producers
Come and take them!
REPUBLICANS should have been a firewall between us and tyrants. (They are useful idiots instead.)
Would Pillen be as friendly with CCP foreign influence agencies as Ricketts has been?
Sen. Linehan still won't respond to questions about Albert sensors used in our elections
Does your senator think you are trying to overthrow the government?
We really should have a better strategy for saving our country
Comments